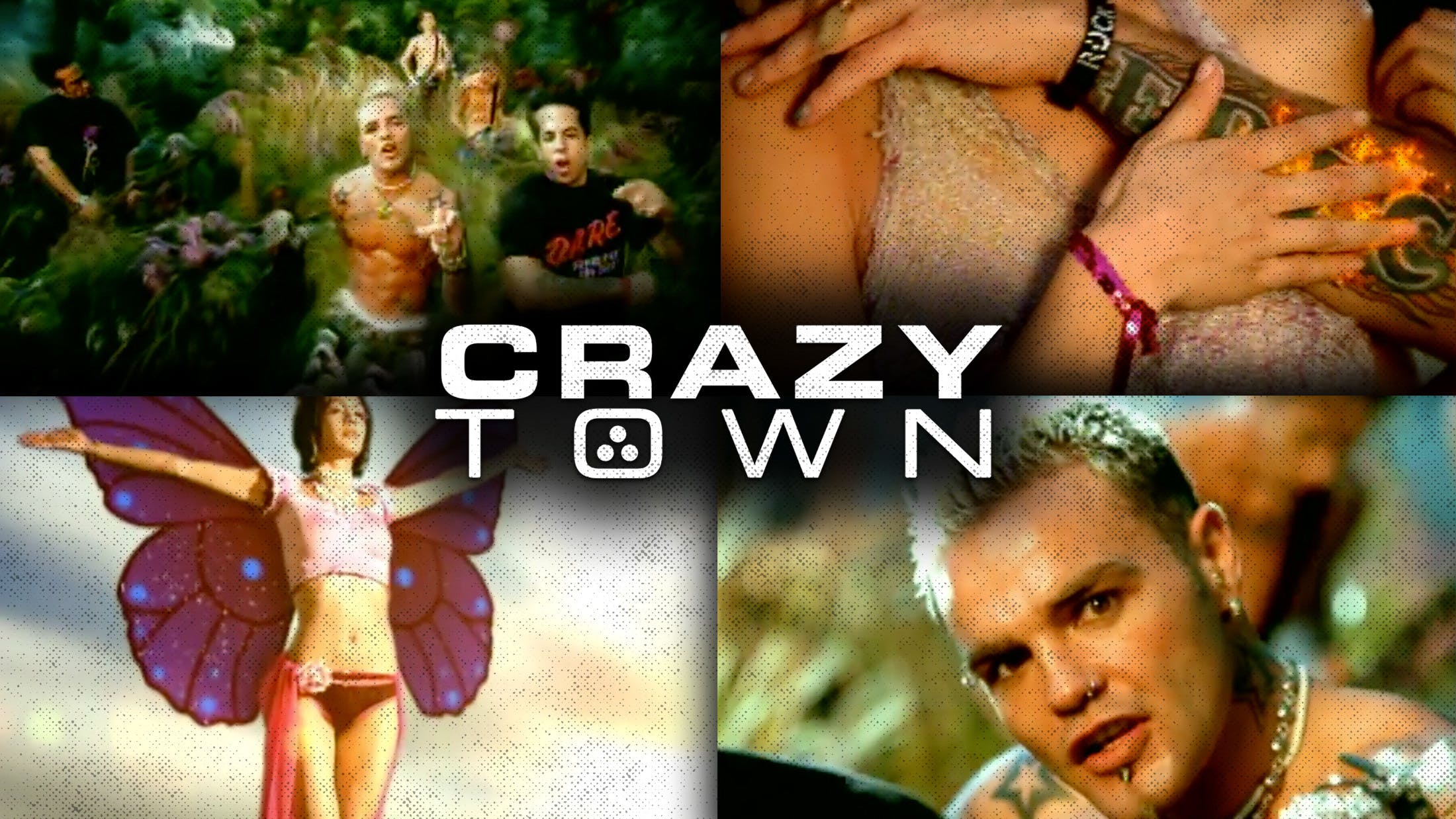 Writing a completely sincere love song is difficult – without the protective layers of irony, metaphor and bravado, laying one's heart bare is an extraordinarily hard thing to do, rendering oneself emotionally vulnerable.

Nevertheless, that was what Crazy Town set out to do with Butterfly – write a truly heartfelt love song. They mentioned nipples in the second line of the first verse, so it could be argued they didn’t quite succeed on those merits.

However, Butterfly was a massive hit. It reached number one in the Billboard charts and helped the album, The Gift Of Game, shift an impressive million and a half copies.

Let’s fold our wings up and dive right in!

0.01
The sample this song is built around comes from none other than the Red Hot Chili Peppers, giving John Frusciante and Flea co-writing credits and a few big bags of money they probably didn’t even notice. It comes from the song Pretty Little Ditty, from the 1989 album Mother’s Milk.

0.10
Something that is immediately clear is that the makers of this video really, really like the FX tab of whatever they’re using. Despite coming out in 2000, when smartphones were a madman’s dream, a reasonable amount of the video looks like every available effect has been layered one on top of the other.

0.19
Here’s Shifty Shellshock, aka Seth Binzer, who co-founded Crazy Town in 1992 under the non-amazing name The Brimstone Sluggers. He has had his fair share of problems over the years. Before Crazy Town’s success, he spent three months in prison for burglary, and as the band were on the way up they nearly lost it all, being thrown off the Ozzfest tour after Binzer got drunk and threw a chair through a window. He has had multiple messy divorces and legal issues, mostly based around his addictions. In 2012 he slipped into a coma. Today, he is sober and merely an enthusiastic coffee-drinker, and continues to perform with Crazy Town (using their new name, Crazy Town X).

0.32
Shifty Shellshock’s star tattoos get a lot of play later, but it’s worth pointing out this other set of star tattoos, encircling the nipples of bassist Doug Miller.

0.47
This is band co-founder Bret 'Epic' Mazur, who one-in-five YouTube commenters pretend to mistake for Ben Stiller. He began his music production career at just 18, producing a song for R&B group New Edition. His uncle, illustrator Ruby Mazur, designed the Rolling Stones’ logo (the lips-and-tongue one) and has purportedly painted 5,000 album covers over an incredibly long career.

0.52
This is drummer James Bradley Jr, who left the band in 2001. He’s had an amazingly interesting career, having drummed with Nat King Cole while just a child, and working with all sorts of acts from Neil Diamond to Beastie Boys.

0.57
The video was directed by the singly-named Honey, who later made Paramore’s Ignorance and Justin Bieber’s Never Say Never.

0.59
The main butterfly is portrayed by Cynthia Mittweg, now a fashion designer and stylist.

1.08
Guitarist Charles 'Rust Epique' Lopez left the band not long after this video was shot. He tragically died in 2004, aged just 36, a month before the release of his new band pre)Thing’s debut album.

1.12
THE STARS ARE DOING SOMETHING…

1.25
It feels like it might have been worth doing one more take of that shot, where it didn’t look quite as much like Shifty Shellshock’s thumb tasted wretch-inducingly disgusting.

1.47
There’s something about Shifty Shellshock’s beard/piercing combo that really makes one want to play ‘Pin the tail on the donkey’.

1.59
The Drug Abuse Resistance Education programme, or D.A.R.E., is an American anti-drug campaign that preaches a zero-tolerance approach to all drugs, and has been widely criticised for encouraging children to work as informants, disregarding scientifically-sourced statistics and in some cases inadvertently encouraging drug use by telling young children how enjoyable drugs are. Their T-shirts became a bit of an ironic fashion statement at one point, often accompanied by such accessories as a big fat bifter.

2.00
'Girl, me and you’s like Sid and Nancy' is a contender for the least romantic line ever written, given that Sid Vicious murdered Nancy Spungeon by stabbing her in the stomach following a history of domestic abuse.

2.07
Sadly Epic doesn’t mention any of the books he’s read.

2.13
This might not be right, as it isn’t mentioned anywhere online, but that looks a lot like Monet Mazur, Epic’s cousin, an actor currently starring in the series All-American with Taye Diggs. She also appears in the video for Crazy Town’s followup single Revolving Door, along with Kimberly Stewart.

2.23
Hey, that was the most exhausting four-second sequence in history! So many cuts! So many effects! It’s dizziness-inducing, and when someone is dizzy, they could succumb to all kinds of maladies. Succumb, malady, succumb, succumb, malady, be my butterfly, sugar, baby.

2.30
As much as we’re slightly taking the mick out of the whole thing, there are definitely worse ways of spending an afternoon doing half-bounces in sync in a virtual jungle with four of your pals.

2.38
Imagine how long it would take to draw Shifty Shellshock. Christ. Fucking ages.

2.44
Baller move by Epic, there. 'Hey, you know what would be a good shot? A woman I’ve draped myself around strokes the big tattoo I have on my arm of my own nickname, and flames appear between the letters.' Bet there’s a screengrab of that bit on his CV.

2.59
Oh, no, she didn’t, she just stood up. Oh. She could probably have done that without the wings.

3.10
Okay, she’s doing it now! She’s hovering without flapping her wings, which butterflies can’t do (and none of the order Lepidoptera can, in fact), but it’s still impressive.

3.30
NOT SO TONGUEY, SHIFTY SHELLSHOCK. RIGHT, THAT’S THE END, YOU’VE RUINED IT, EVERYONE GO HOME.

What a time it is to be alive!