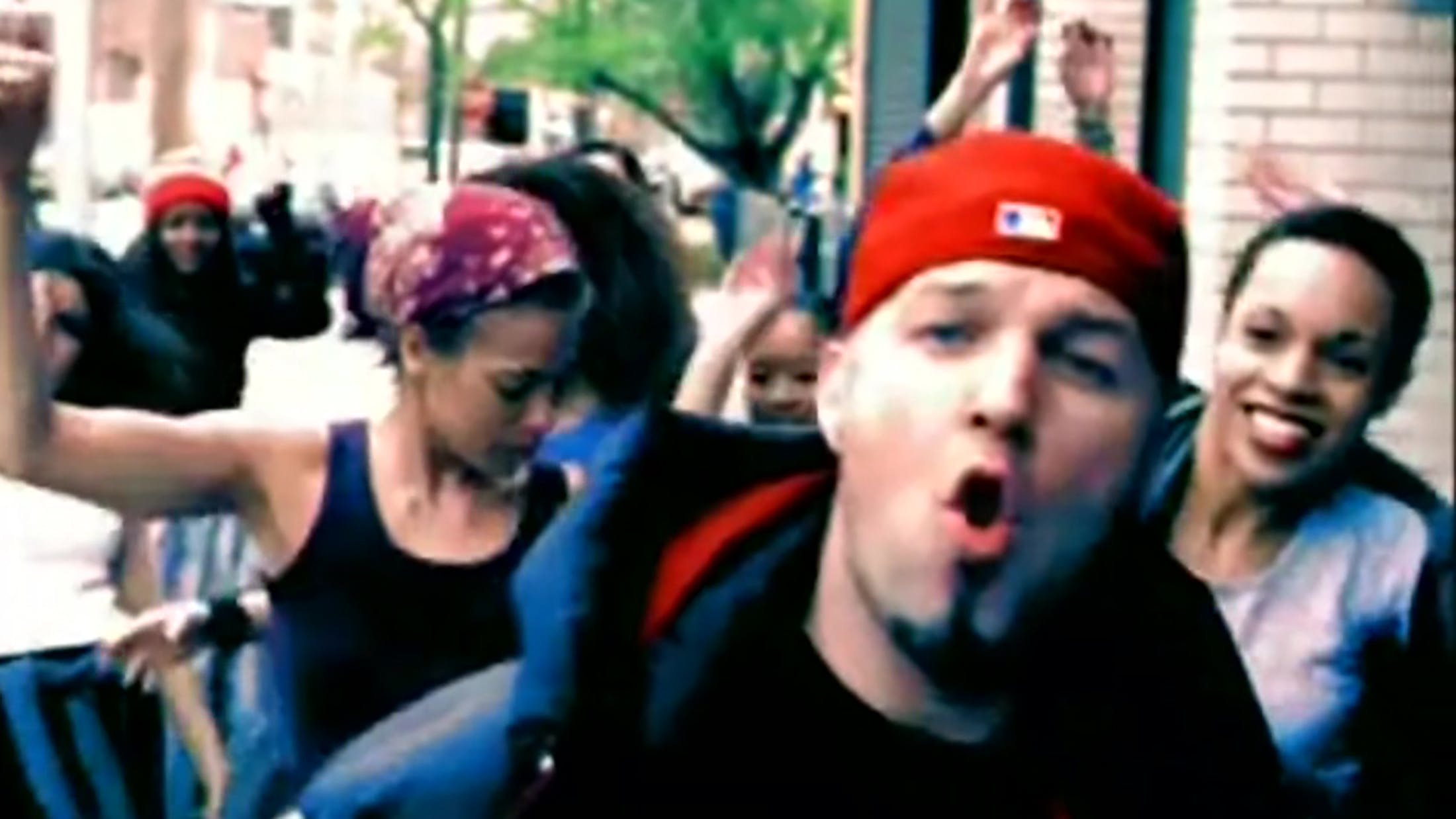 Think of Fred Durst and you think of the red, back-to-front New York Yankees New Era Flexfit, the hat that launched 46 fucks while not giving a single one in return.

Never is that hat more front-and-centre, more celebrated, more in-your-face, than in the video for Nookie, the it-was-all-about-sex anthem that propelled Durst and Limp Bizkit to cultural ubiquity.

The song was GRAMMY-nominated, sent Significant Other seven-times platinum and made Bizkit into MTV mainstays, making frontman Durst colossally famous and turning the former tattoo artist into an international celebrity.

As a video, Nookie is, well, it’s pretty rough around the edges. But hey, let’s all shave ourselves a mini-goatee and dive on in.

0.02
There he is, Fred Durst, all cosy in a big winter coat on a sunny day. This was the third video Durst directed. “I think this is going to be a mega video,” said Durst in a behind-the-scenes documentary. “I thought Faith was mega, but this is that times 10, for sure. You’re going to remember this video and this song for a long time." And here we are, remembering it, a long time after the fact.

0.07
There sure are a lot of attractive young women around, and they’re all dressed for warmer weather. There’s a real temperature inconsistency throughout the video, as Durst is very much dressed for chillier climes.

0.13
A callout was made on the radio the day before this video was made, getting Bizkit fans down to the shooting location in Long Island City, NY, at 2:30, where they were split by gender. Of the genesis of the video, Durst said “I couldn’t think of anything cooler than me cruising through the city, having one chick, two chicks, a thousand chicks, following me through the city while my band’s really bored, playing for a whole bunch of guys”.

0.14
This is one of Wes Borland’s creepier get-ups, in that he looks like an Island Of Dr Moreau style monkey-man, a simian-chap just a few steps down the evolutionary ladder. He appears to be signing autographs in lime green Sharpie, which is fun.

0.30
'I came into this world as a reject', sings Durst. What’s the song all about then? "It's about my ex-girlfriend, how she treated me like shit, and I couldn't leave her, wouldn't get over it," Durst told MTV. "She screwed my friends and used me for my money. I tried to figure out why I did it, and I figured I did it all for the nookie."

1.07
A little bit of The Robot from Durst, there. Classic.

1.30
Durst has directed a lot more since this. He directed another dozen or so Bizkit videos, plus videos for koRn, Method Man, Puddle Of Mudd and Staind. He made his theatrical directorial debut in 2007 with the Jesse Eienberg-starring The Education of Charlie Banks, and followed it up with The Longshots a year later. He is currently working on a film called Moose, starring John Travolta, based on his own experiences with obsessed fans.

1.43
He begins this verse by rhyming 'long' with 'long', which isn’t technically rhyming.

2.03
Supposedly somewhere in this video is actress Sunny Mabrey, who went on to be huge on Vine and star in Snakes On A Plane.

2.14
“I can’t believe that this many people showed up and behaved as well as they did” said Wes Borland on the shoot. “They got rowdy, but that’s kind of what we wanted them to do.” One of the girls from the crowd did a Reddit AMA recently, and the shoot sounds, well, less than glamorous. “They played the same 20-second loop over and over again for five hours,” she wrote. “We were constantly jumping up and down. It got old. No live music was played, which was bullshit, as I assumed since the whole fucking band was there with their instruments and half of MTV present they could muster something besides a recording. It was an eye opener. I left after five hours to get food. I’d had enough of the nookie.”

2.29
We’re in Loads Of Hats Country now. It’s arguably quite an egocentric idea, isn’t it? This early-in-ones career, to deem oneself iconic enough that people can dress as you. Eminem did the same with the conveyor-belt of clones in the Real Slim Shady video, arguably. Maybe it’s a case of “If I present myself as an icon, I’ll become an icon”.

2.52
So, up until this point the band have been playing without Durst, and to an all-male crowd, and now a mob of Durst-adoring women have shown up.

2.58
There’s a cowboy in amongst the women, a cowboy who looks a bit like Les Claypool from Primus’ video for Wynona’s Big Brown Beaver. Durst and Claypool know each other, and Claypool was on Significant Other and defended Durst after Limp Bizkit’s set at Woodstock ‘99 descended into chaos (telling a newspaper "Woodstock was just Durst being Durst. His attitude is 'no press is bad press', so he brings it on himself. He wallows in it. Still, he's a great guy"), so it seems plausible.

3.40
Durst ended up adopting the title of the song as something of a personal catchphrase for a while, using it as an excuse when criticised for performing onstage with Christina Aguilera, something some of his nu-metal colleagues saw as a bit of a betrayal of the genre’s anti-pop values. “I did it all for the nookie, man. That's why I did that with Christina," Durst told MTV "I want that girl, that's that. What do you want? I don't want to make music like her. I can't stand that kind of music. People were like, 'What'd you do that for?' What do you think I did that for? It's obvious, isn't it? You know what I mean? So that's the deal. Everybody saying that was wishing they were doing that too." Aguilera later clarified “He got no nookie. That did not happen.”