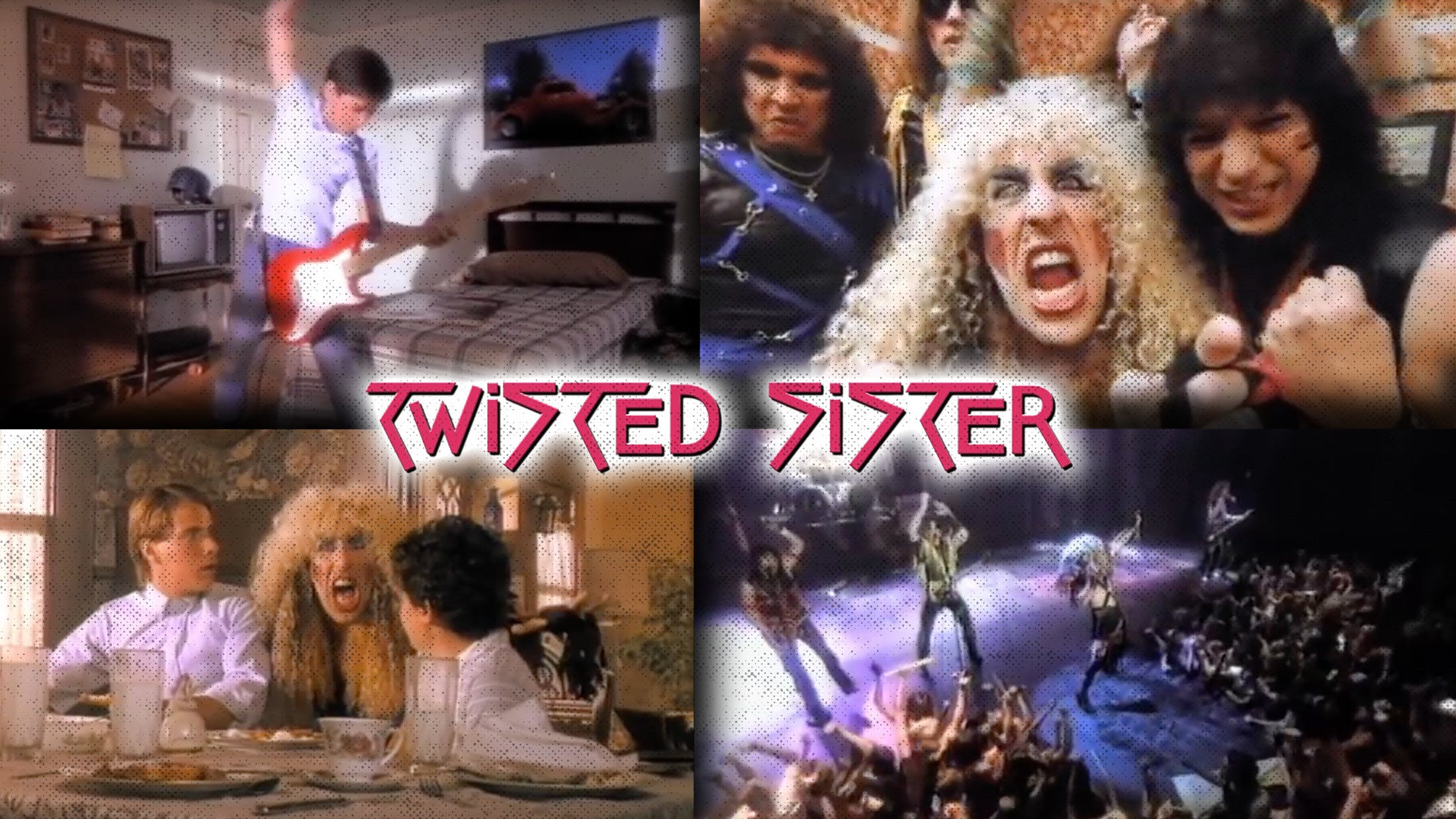 An anthem for the downtrodden everywhere, a Yuletide-influenced paean to generic pissed-offness that gets passed around politicians like a hot potato, and a snapshot of a deeply strange time in history where a man in American football shoulder pads sporting a Regency mole was the most terrifying thing imaginable. Yep, it’s glam-metal sillies Twisted Sister and their slapstick-filled, non-specific ode to being irate, We’re Not Gonna Take It. Let’s dive right on in, shall we?

0.01
This kid is Dax Callner, son of the video’s director Marty Callner. That's possibly how he got the job, despite, from the looks of it, never having seen anyone play the guitar. Marty Callner had previously directed a bunch of HBO comedy and music specials, including Robin Williams’ Live On Broadway, but this was his first music video. They were something of a nascent form at the time, so nobody had extensive music video experience, so Callner struck Atlantic Records as a perfect fit. He later directed videos for bands like KISS, Dio and Aerosmith. Dax is now a marketing strategist.

0.02
Dax is listening to I Wanna Rock, which would later be released as a single. Yo, you know who supported Twisted Sister on tour while promoting this album? Only bloody Metallica.

0.10
This irate father is played by Mark Metcalf, best known for his role as Douglas C. Niedermeyer in the frat comedy Animal House, Dee Snider's favourite film. He plays an extremely similar role in Twisted Sister's followup video I Wanna Rock. Metcalf is, it's fair to say, fucking amazing in this video, to the point that we are going to keep a tally of crossed eyes and blunt-force trauma. This opening sequence is recreated, with the dad role taken by Dee Snider, in Lit’s video for Zip-Lock.

0.18
This insert of Dax’s little brother giggling at him being shouted at is a bit confusing, because it suggests the dinner table is on the same floor as Dax’s bedroom. That would generally only be the case in a bungalow, which as we’ll see, this isn’t.

0.19
The dad – whose name is given as Douglas C. in some places, a nod to his Animal House character – has an incredibly counterproductive approach to dealing with messiness, throwing stuff on the floor while complaining about it.

0.33
The bulging-eyed delivery of “What do you want to do with your life?” is so good.

0.42
See, that’s not a bungalow. Also the dad’s just been blown through a plate-glass window by the force of one strum of an unamplified electric guitar. Badass.

0.43
Blunt-force trauma count: 1
He’s rotated, somehow, and all. Nitpicking is really not what this video is about. It’s much more Mr Bean than Citizen Kane, but still.

0.49
That is, with all respect to everyone involved, a terrible bit of bucket-to-the-face. Half the water slops out before hitting him. It’s a shame, because it’s a great, cheerfully daft running gag.

0.57
There’s a lot going on with Dee Snider. When he joined Twisted Sister he kind of took the band name and ran with it, coming up with an aggressive semi-drag persona, complete with beauty spot, designed pretty much entirely to confuse and enrage suburban fathers. Also that kid’s just transformed into him. Wacky!

1.26
Oh shit, the family’s other two sons have also transformed into members of Twisted Sister! That is Jay Jay French on the left and Eddie 'Fingers' Ojeda on the right, both guitarists.

1.31
How many fuckin’ sons does this family have? No wonder their dad’s at the end of his tether.

1.39
These curly-haired fellas are bassist Mark 'The Animal' Mendoza and drummer AJ Pero. This is the classic Twisted Sister lineup which remained consistent despite a fair few breaks and hiatuses until Pero’s death in 2015. Mike Portnoy of Dream Theater drummed for a farewell tour, and the band called it quits in 2016.

1.54
If you look closely, the footage superimposed on the screen doesn’t quiiiiiiite line up with the edge of it. This was 1986, long before YouTube, and they were doing their best.

1.56
This is one of the only moments in rock history where you’ll see a screenful of people headbanging in unison to the word ‘condescending’.

1.58
A major breakthrough in writing this song was Snider’s realisation that the verse and chorus didn’t need to be particularly different. He had written the chorus several year earlier, but it took hearing Def Leppard’s album Pyromania to finish it. In one interview he said: "In studying some of Mutt Lange's work with Def Leppard, I saw that a number of their songs were using variations on the chorus as a verse. That gave me the information I needed.”

2.05
A drum covered in glitter, there, because what’s more glam rock than that?

2.18
This bit is fucking nowhere near lining up. Everyone in the past was lazy.

2.32
For diving from a standing start, that is kind of amazing. It seems weird to think how controversial this once was. It reads to modern eyes as fairly silly, all gurning and daft faces, but in 1985 this was extreme stuff. The government got involved. In 1985, a group called the Parents Music Resource Center included this song in the 'Filthy Fifteen', a list of songs they saw as outrageously offensive. With some, like W.A.S.P’s Fuck Like A Beast, you can see where they were coming from, but this? It was cited as being violent and/or encouraging violence, which led to Dee Snider testifying in a Senate hearing alongside country legend John Denver and magnificent weirdo Frank Zappa. Snider said, "You will note from the lyrics before you that there is absolutely no violence of any type either sung about or implied anywhere in the song. Now, it strikes me that the PMRC may have confused our video presentation for this song with the lyrics. It is no secret that videos often depict storylines completely unrelated to the lyrics of the song they accompany. The video We're Not Gonna Take It was simply meant to be a cartoon with human actors playing variations on the Roadrunner/Wile E. Coyote theme. Each stunt was selected from my extensive personal collection of cartoons. You will note when you watch the entire video that after each catastrophe our villain suffers through, in the next sequence he reappears unharmed by any previous attack, no worse for the wear.”

2.45
In a video best known for Mark Metcalf’s over-the-top mugging, all credit to the late AJ Pero for this display – a dramatic entrance, an ostentatious display of four drumsticks, a theatrical discarding of them and then a brilliantly primal bit of drumming with fists, all in a matter of a few seconds.

2.53
What the 'it' they ain’t gonna take is, is never defined, and it turns out there’s a reason for that. Snider told Songfacts, "With We're Not Gonna Take It, whether I was singing about my parents, my teachers, my bosses, my peers, people around me, I felt it was important not to define it by actually naming names and singing, 'Dad, you're so trite and jaded, I hate my teachers, too.' And thus, the song has had a life in sporting events, at political rallies, at protests, pretty much anybody who's not taking something from somebody else, they're going to break into We're Not Gonna Take It all over the world."

2.59
If you can’t play the guitar and want to learn a solo, learn this solo. This solo is pretty much O Come All Ye Faithful.

3.00
The storyline starts making even less sense from hereon in. The dad is climbing a tree with a rope, but thank god, it’s not for anything dreadful, just to make a swing to try to… get into his house? Or something?

3.06
So this bit of blunt-force trauma (BFTC: 11) isn’t even the band’s fault – he’s swung into a flat, windowless, extremely unconvincing wall (an entirely different colour to when we last saw the outside of the house)…

3.08
…which is quite clearly actually a floor…

3.09
...and then he’s somehow a long way back from it when the concussion sets in. Very odd, and with nobody to blame but himself. Nonsense.

3.10
Speaking of nonsense, you know who loves this song? Donald Trump. It was used at the end of all his rallies during his 2016 campaign. Snider initially let Trump use it, as they had become friends when Snider appeared on The Apprentice, but he later changed his mind as more and more of Trump’s policies clashed with Snider’s views. He told Blabbermouth, “I've got friends who I know have far different political opinions than I do. When Donald started running for office, he asked me, he called me. He says, 'Can I use the song?' And he's a buddy. And I said, 'Yeah. Go ahead.' But as the months went on, I heard a litany of his beliefs that I'd never discussed with him. I finally called him and I said, 'Man, you've gotta stop using the song. People think I'm endorsing you here. I can't get behind a lot of what you're saying.' And that night… He has not used it since. He said, 'Dee, fair enough.' [...] I still like him, but, man, I did not know some of the things that he believe in and stood for." The first line of the song, for instance, is 'We’ve got the right to choose', while Trump’s government is resolutely anti-choice when it comes to women’s reproductive rights.

3.52
This shot, the band advancing together like a gang through the suburban home they’ve invaded, all shaking their fists at once and making threatening faces, is so, so great. This is what, at the time, counted as terrifying and threatening – five reasonably nice dudes gurning while wearing rouge.

3.55
This bit, though, in which the dad pretty much does a paranoid shuttle run before flinging himself from a window, is complete nonsense, although it provides another showcase for Mark Metcalf’s excellent silly-face skills.

4.11
That… is a stunt double. But also, what’s actually happened? Why’s he flung himself backwards through the wall of his house? (BFTC: 12, by the way.) Has seeing his five sons transform into glam-rock superstars Twisted Sister sent him fully insane?

4.16
“Now drop and give me twenty” is one of Neidermeyer’s lines from Animal House. Also, the rest of the video is fucking obscured by links to other videos, which is a shame as there’s almost certainly some excellent 'I am a concussed, insane person' acting from Metcalf. So, there we go. What a ride, an oddly pleasant, impact-filled tribute to 'fuck this'. Glorious.

Dee Snider: "We used to wear women's clothing, until the night my wife showed up and I was wearing the same top she was"

Dee Snider revisits his first forays into rock'n'roll, brawling onstage, his iconic Twisted Sister look and how he stood his ground against the PMRC...

Dee Snider Says New AC/DC Album Has Been Delayed, But Is "The Ultimate 'One More Time'"

9 Of The Craziest Crusades Against Rock And Metal

Here are nine times the moral majority went to war against rock and metal music.

Glam metal legends Twisted Sister are calling it a day after a 40 year career. Catch them at Bloodstock in their final UK appearance.