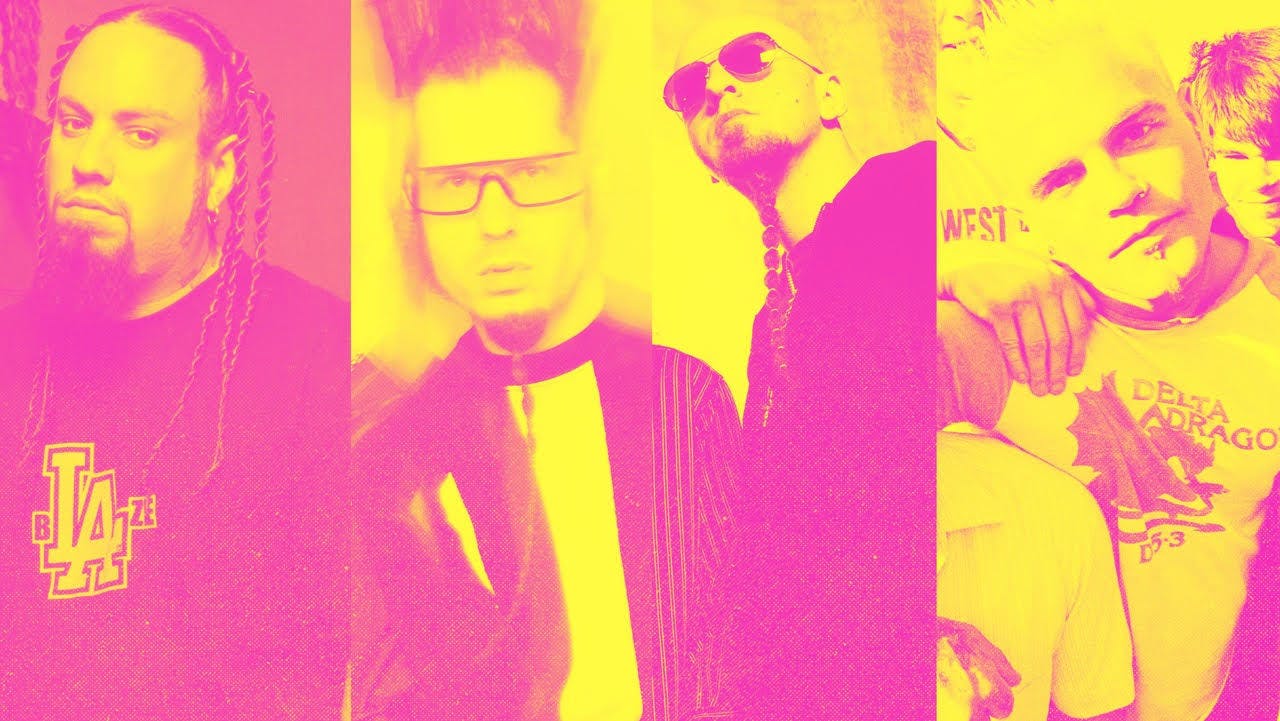 Men’s clothing is way less exciting than women’s. Men pretty much have three colours of trousers on their bottom halves and a choice of no buttons, a few buttons or lots of buttons up top. There are three available sleeve lengths, and that’s it. That’s your lot.

The only area of fashion where men get to be creative and women don’t is facial hair, and no musical genre has ever supported facial hair creativity like nu-metal.

The much-maligned genre is all too easily dismissed, all too easily parodied, and in a lot of cases, all too hard to defend – for every truly great band it produced (and there were plenty) there were a dozen identikit outfits with swiftly-acquired sleeve tattoos. For every giant anthem, there’s a bunch of samey misogynistic claptrap. As a genre label, nu-metal is rejected by almost every major band within it, so reluctant are they to be associated with a term that is so frequently used as a punchline.

But holy shit, it did some cool stuff beard-wise.

For a long time, where were only really four types of beards – the full beard favoured by bikers and hippies, the David Brent-style goatee, the smaller Guy Fawkes combo and the soul patch beloved of jazzmen and, in later times, Mötley Crüe drummer Tommy Lee. Plenty of men only had moustaches with nothing on their chin, but other than Abraham Lincoln, very few had it the other way around. Facial hair was generally smart, the neat domain of policemen and sergeant majors, of J. Jonah Jameson and Commissioner Gordon.

There were outliers like Lemmy, with his glorious handlebar-and-chops, Metallica’s James Hetfield and his several experimental moustaches, and Black Sabbath’s policeman-like upper lips, but for the most part, metal used to be a place devoid of facial hair. Lars Ulrich had some disgusting bumfluff on his top lip for a while, and Slayer's Kerry King grew what he could, but there wasn’t a lot about.

Then, as the bands who would inspire nu-metal developed, beards started popping up here and there. Scott Ian of Anthrax, one of the first bands to combine rap and rock, sprouted frizzy gold dust from his face as early as the 1980s. Dimebag from Pantera had a pink goatee. Robb Flynn of Machine Head sported a three-pronged chin, Primus had had a few beatnik-type beards and both Mike Patton of Faith No More and Trent Reznor of Nine Inch Nails sported minimalist micro-beards in the 90s. So, by the time Korn rolled around, you bet your arse there were a few soul patches.

For a lot of dudes, the area above the top lip is the last bit of facial hair to grow. Sometimes it doesn’t kick in until ones mid-to-late 20s, or doesn’t come in at all. This has always presented something of a conundrum for young men, as with most traditional beards, that part acts as something of a keystone. The only people you tended to see in pre-nu-metal times with a beard but no moustache were Amish, farmers or Amish farmers.

It was a shame – why should missing the few key inches of moustache necessitate an otherwise clean face?

Suddenly, with the rules of what did and didn’t constitute a beard thrown out of the window, there were loads of creative solutions for the young man who liked loud music and wanted a beard but maybe wasn’t quite capable of growing a full one yet. Two or three square centimetres of slightly off-centre gingery growth could now be cultivated and groomed.

“Would you not consider shaving that off before your passport photo?” a parent might implore, before being told “NO, MUM, IT’S MY FUCKING BEARD.”

All kinds of beard were present. In a genre not necessarily celebrated for its diversity, at least there was a reasonable variety of oddballs on display. Shavo Odadjian of System Of A Down had a beard that, from chin to pointy end, was split into sixteen sections by elastic bands. It was amazing. (Note: As mentioned above, a lot of bands reject the nu-metal label, and there’s a reasonable argument to be made that System Of A Down weren’t actually a nu-metal band at all. However, even if they weren’t nu-metal, their beards were.)

David Draiman of Disturbed built himself one of music’s most iconic chins when he paired a teeny-weeny soul patch with two massive curly piercings (which he has since removed). Pitchshifter’s JS Clayden had a vaguely devilish demi-goat. Adema sported, between them, a thumbprint-sized microbeard, a slightly grown-out pointy hybrid thing and a full-on Scott Ian-like monster the size of two hairy fists.

Sporting these increasingly intricate beards can’t have been easy. Beard hair tends to have a lot more in common with pubic hair than the hair that typically grows on heads, making it curly and hard to manage beyond a certain length.

The full, shaggy beard of a hippie is low-maintenance by design, but by the time you’re putting over a dozen rubber bands in your facial hair there’s a lot of work involved. Combine an intricately-sculpted beard (a la Josey Scott of Saliva’s three-pointed marker-pen-thick effort) with a high-maintenance hairdo (like any of Dope) and – why not – some body paint (see Twisted Method, who combined unusual facial hair with body paint in a way that definitely looked cool on the day but hasn’t stood the test of time) and you’ve got a six-hour getting-ready routine.

The late Wayne Static of Static-X twinned the highest hairdo in the world with a chunky neckbeard that led into an incredibly impressive three-foot chin ponytail. The commitment required to grow and maintain that, and the care that presumably had to be taken when shaving around it, is genuinely impressive.

What was the point, then? Nu-metal is predicated on angst, anger, youthful misanthropy, and baffling grooming was just one of the ways this could manifest (and a more pleasant way than the homophobia and misogyny that it also sometimes manifested in).

“Mother, Father,” these beards said. “This music is not for you.” People looked really alarming. Chad Gray of Mudvayne and later Hellyeah sported bright blue three-foot twin dreadlocks from his chin for a while, later experimented with an impressive forked goatee and more recently has sported a crimson tuft-and-soul-patch combo. When Mudvayne showed up at the MTV VMAs they all had bullet holes and blood painted on their faces. It was clear: this wasn’t for everyone.

Some looks worked better than others, of course. Shifty Shellshock from Crazy Town paired a centimetre-wide lip-to-chin strip with a labret piercing in a way that looked a tiny bit like someone had played Pin The Tail On The Donkey on his face.

Weirdness could be welcomed, though, as with several of Drowning Pool, who produced the disconcerting but not unpleasant feeling that the top and bottom halves of two different people’s heads had been fused together. Beards leading up into sideburns led up into nothing. Facial hair cut off abruptly in a straight line like it was being printed and the cartridge ran out. There was an overall feeling like those mix-and-match children’s books where each page is split into three and you create chimeras.

That’s the thing. Nu-metal wasn’t for everyone, and might be looked upon kinder by history when a few more years have passed, when time can Tipp-Ex out the dodgy bits and a Greatest Hits version exists, when the offensive elements are long enough ago that they don’t seem as shocking. A lot of that stuff was performative, deliberate provocation, just done in a misguided fashion and sometimes aimed in the wrong direction. The visual side of it all makes more sense when seen as something of a costume, the kit of that particular sub-genre. There was an element to all of it that was pantomime-y and silly, all foot-high hairdos and big-ass shoes.

As everyone involved has aged, the brunt of them have grown out their microbeards and let all the bits join up, and now sport the full, thick beards of older men. They’re husbands, fathers, grown-ups with responsibilities too important to spend time making sure every point on their chin is the same size. People might be sensible now, but you just know all it would take is five minutes with a shaver, sculpting and shaping, for some beautifully ridiculous facial madness to return.