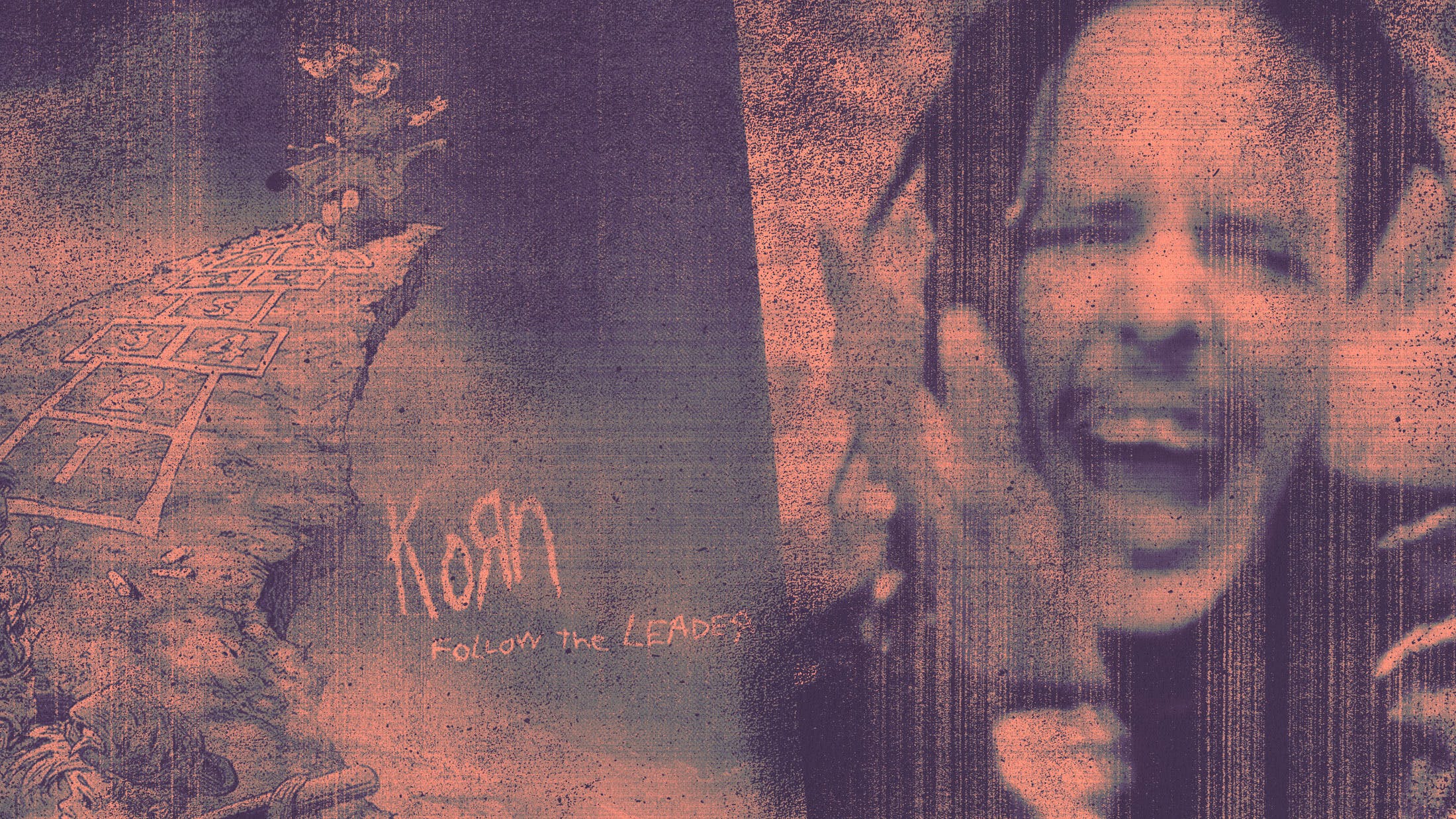 It’s now a whole 20 years since the world received and embraced Follow The Leader, Korn’s five-time-platinum third album, and one of the seminal texts of nu-metal. To commemorate that, here’s a damn near second-by-second breakdown of the most iconic video from it, the magnificent, transcendental, epoch-defining Freak On A Leash.

0.05
As quick, monstrous flashes come in, we get the first hint that this isn’t Merrie Melodies. Something is rotten in wherever this is. It’s also clear from the get-go that the animation is real top-end stuff. The video was directed by Todd McFarlane, a powerhouse within the comics industry. MacFarlane was the creator of Spawn, co-creator of Venom, arguably the most influential figure in ‘90s comics and the artist behind the Follow The Leader album artwork.

0.18
Eighteen seconds in, there have been about a hundred cuts. Animation is incredibly time-consuming and this video was reportedly released a whole year after it was intended to be. This guitar intro, by the way, was recorded through a fan – not someone that liked Korn, a rotating room-cooling machine. Engineer Toby Wright fed the amp through a spinning fan as it was recorded to get that wobbly sound.

0.23
The vocals come in, as a security guard listens to Jonathan Davis doing his more strained voice – you know the one he does, where it sounds like he’s trying not to ejaculate.

0.36
Honestly, it’s hard to get across just how much work we’re looking at. Bear in mind this was 1998. This is incredibly ambitious, insanely difficult, ridiculously time-consuming, intricately-edited, multi-layered animation, made in an era where the most powerful computers available probably couldn’t handle WhatsApp today...

0.39
Check it out, yo, it’s the cliff from the album cover! Follow The Leader sold like hotcakes, topped charts all over the world and generally made nu-metal A Thing. Even though it was always the most maligned of subgenres, the massiveness of a few albums – Follow The Leader among them – made nu-metal just too big to ignore. Like, the impact of this album is incredibly hard to overstate.

0.43
Supposedly, some of the hopscotch-playing children are based on members of Korn. As we’ll see later, every member of Korn is a bearded, tattoo-covered adult man, so something was bound to be lost in translating them into kids.

0.46
We briefly see Macfarlane’s fully-detailed version of the album artwork. Todd McFarlane is both directly and indirectly responsible for a hell of a lot of pop-culture awesomeness. Excited about the upcoming Venom film? He designed Venom. A fan of The Walking Dead? He co-founded Image, which put out the comics the TV show is based on. Like Pearl Jam? This guy made the Do The Evolution video.

1.04
Hang on, it’s… not a cartoon anymore? The bullet shoots out of what is now a 2D poster of a McFarlane drawing of the little girl looking scared, and flies across a real, 3D, actual room and straight through a lava lamp, which explodes in glorious slow motion. Assisting McFarlane on the video were husband and wife team Jonathan Dayton and Valerie Faris, who went on to become Hollywood directors, making Little Miss Sunshine, Ruby Sparks and Battle Of The Sexes – it seems reasonable to assume that they had a large part in the live-action sequence.

1.11
It’s weird to think that there are individual seconds of this video that cost thousands of dollars in animation, and there’s a good six seconds here which is just a £20 lava lamp being twatted in slow motion, and both of them are equally awesome.

1.13
In futuristic 2018 it’s easy to see some of the CGI in this video as looking a bit dated and slightly underwhelming – the motion-ripples around the bullet look perpetually shonky, and the way holes appear in things as the camera follows the bullet from behind never looks amazing. But it all works, and you know what? Do a better job of a music video following the path of a bullet firing through multiple environments in slow motion and then you get the right to criticise.

1.18
Here, finally, are Korn, jumping up and down in a dark room with lots of holes in it. There is a huge amount of plaid and enormously baggy khaki trousers due to it being 1998, and a kilt, high socks and an Adidas sporran due to Jonathan Davis being Jonathan Davis.

1.23
It’s hard to know for certain, but the stripes on Davis’ sweatshirt might be made of holograms.

1.24
This looks a lot like the street from the end of Back To The Future, where Doc flies away in the DeLorean… but it probably isn’t.

1.29
If you don’t like Korn, they’re incredibly easy to criticise. Nu-metal as a whole took a kicking from both the mainstream press and, initially at least, traditional rock media. Coming not long after grunge, where half the point was looking like you were barely trying, here was a subset of music where people were clearly making an effort: intricately-sculpted facial hair, braided beards that took fucking ages to do, and sporrans. But isn’t there something to be said for putting the work in? The more-is-more attitude is incredibly clear here in everything from the video itself to the band’s hairdos, and it’s really commendable. Basically, fuck you if you can’t appreciate how hard the band are working on their facial expressions.

1.35
Is that actually what a speeding bullet looks like? No idea. It looks like the bit that screws off the end of a clicky pen.

1.42
The combination of a children’s party and a bullet is a very uncomfortable one, horribly even more so in 2018 when reports about shootings seem as much a part of the news as the day’s weather forecast. As such, we’ll take this opportunity to point out that nobody is hurt during this video, live-action or otherwise.

1.45
Good. Take that you stupid balloons!

1.59
Take that, you stupid glass of stupid milk!

2.02
Sometimes the CGI is really good – the bullet flying through the kitchen is pretty fantastic – and sometimes there’s a sudden bit of slightly dodgy green-screening that works within the edit but, if you're watching it second-by-second for a silly article on a silly website, you totally notice. Still, take that, you stupid can of stupid whipped cream!

2.17
Has anyone ever actually encountered a water cooler where the giant bottle of water is made of glass? Surely not. They’re made of plastic – making them out of glass seems like something you would only do if, like, plastic had never been invented. A plastic bottle wouldn’t break anywhere near as badassedly though – there’d just be a little hole punched through either side of it. Poetic licence.

2.23
The most dated element of the video, more than the clothes, hair, music or anything else is that phone. What a brick. Do you use that thing to make calls or build a fucking dam out of? Jesus.

2.33
Whoa. Hold the (enormous, ancient) phone. There’s a Korn poster on the wall and the bullet goes straight into it, entering Korn’s world. What if there had been a motivational picture of a kitten dangling from a branch with the inspirational message Hang In There – would the kitten have died? What about the tennis player scratching her bottom? That, surely, would have been horrific.

2.37
The bullet is very big compared to Davis’ face, which raises the question – is this the real Korn or is is poster-Korn, smaller versions of themselves inhabiting an inside-paper world, small men like Terry Pratchett’s Truckers? But then, the gun was fired from within an even smaller poster, so what is the deal there? This isn’t realistic at goddamn all.

2.38
We’re at the most fun bit of Korn’s whole oeuvre to imitate – the bit everyone can do a crap impression of – the 'DUNG a daka, DUNG DUNG a daka daka' bit. It was the subject of an academic paper by David Lloyd of the University of Alberta, Canada, entitled Mercury Models: Distortion of Language and Identity in New Heavy Metal. “Fragments of English-language words can be perceived in the midst of Davis’ gibberish, such as ‘boy’, ‘things’, and ‘they’” he writes. “By effectively ‘speaking in tongues’, Davis is giving voice to his inner basic feelings, which are trying to resist being shaped or conditioned by utterances of others. This results in most other people being unable to reproduce what he is uttering, and thus being unable to ‘twist’ his ‘words’ back against him.” Academia’s changed, man.

2.45
It’s just cool, isn't it? Even 20 years later, a frantically-edited, crazily-lit video of a kilted, scatting man and his quizzical-looking, bass-heavy friends interacting with a moving bullet is just awesome. It’ll pause for a sec in front of, for instance, Munky’s quizzical face, then move on, and it’s all excellent and if you disagree you are wrong.

2.53
The eye acting by Korn in this video is top notch. It’s up there with Billie Joe Armstrong in the Basket Case video, and Johnny Rotten in everything he does in his whole life.

3.05
And out of the poster the bullet goes, soaring back across the room.

3.13
Take that from the opposite direction, stupid pot of stupid coffee!

3.17
Take that, stupid comic that it makes reeeeeeasonable sense is a Todd McFarlane Spider-Man comic from his bestselling run, in a nice little bit of in-jokery!

3.42
Take that, slide! That’s what you get for not being as good as roundabouts.

3.54
The glass water cooler (WHICH DOES NOT EXIST) is still falling, so this is all happening incredibly fast. Does glass fall slower than tubby dudes? No idea. Physics is super complex.

4.04
Somehow the lava lamp has fallen even less than the fictional glass water cooler, but it’s a lava lamp so it’s probably stoned.

4.05
Back into the poster and straight at the girl… oh noooooooooooo, okay, phew, it’s all good, nobody was worried.

4.07
And we’re back in the fully-cartoon world, the bullet pausing in front of the little girl’s face the way it did for Head and Munky earlier.

4.20
Duuuuuuuuuude. The bullet’s, like, vanishing, and there are so many more kids than there were, and the guard is devastated, and what a brilliant video. Two MTV Awards and a GRAMMY were to come Korn’s way for this, and every accolade was entirely justified.

What a video. All hail Korn and happy 20th, Follow The Leader.