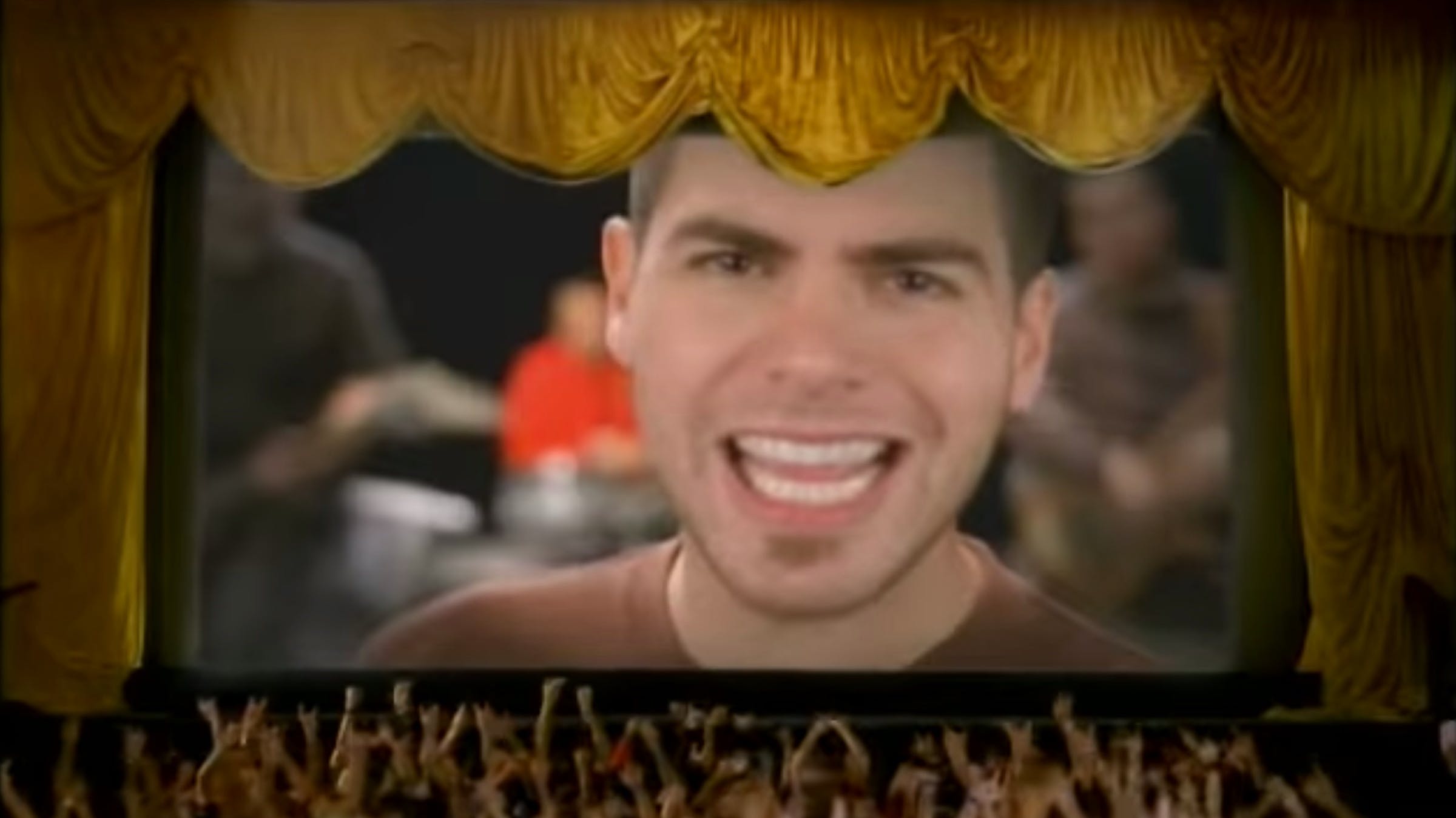 2001 was a very different time, and in many ways a simpler one. The internet existed, but was kind of rubbish - downloading a song took hours, and now-staples like YouTube, Facebook, Twitter and Spotify were years away.

One band that had a really good 2001 were Alien Ant Farm. The four-piece from Riverside, California stuck out from their nu-metal colleagues by seeming like they were having a lovely time, gurning and grinning their way up the charts. Their Smooth Criminal cover was a surprise hit, a song they would play at gigs for a laugh that ended up being a runaway success. Spin described them as “proving nu metal could be funny on purpose”. While everyone else was wearing too much black, they were wearing too much brown.

Let’s leave the Jackson stuff alone, shall we, and take a big deep dive into Movies...

This is the Vine Theater in Hollywood, a second-run cinema that was an institution for many years before closing in 2007, later reopening as a private screening room.

There were three videos made for Movies, because it came out twice. There was this one, where the band play at a house party, which never got released. Fair enough not releasing it, to be honest - it’s a bit shit and really sexist.

Next was a low-budget one that isn’t bad - it features plenty of silly faces and silly dances and they’re all wearing too much brown, but the big-budget one - the one we’re looking at today - is better.

Why so many? Well, the song had come out and not made a huge impact, and then the band’s cover of Michael Jackson’s Smooth Criminal came out and did amazingly. However, due to tragic events beyond the band’s control, it was removed from US radio airplay.

“Movies was the first and third single” Mike Cosgrave told Metal Recusants. “People started to play Smooth Criminal and it took off. When 9/11 happened back home, we were setting up to play at the Mean Fiddler in London. At that time [media company Clear Channel released a list of songs that were “inappropriate” to play on the radio. Smooth Criminal was on that list. So the radio stations still wanted to support the band and started playing Movies in its place”.

"Once we knew radio was going to back Movies, it was pretty obvious for us to go and do a real video for it," Dryden Mitchell told MTV. "The one we did before was [made in] three hours [of] drunken behavior."

These old animated advertisements used to be a staple of the cinema experience, but, like, way before Alien Ant Farm were knocking about. You see them in Grease, for instance.

AAF frontman Dryden Mitchell pioneered this haircut, the inverse-Mohawk, which didn’t really catch on but he got away with. He still sports the soul patch to this day, although looks ever so slightly different.

Looking under the seat for him doesn’t make any sense, right? He so clearly launched himself forward off it. It’s all good. You do you, drummer Mike Cosgrove.

Mitchell described this bit to MTV as “some Stargate-style getting sucked into the screen.”

We’ve all been to cinemas like that - you get up for a second and some, like, rave-surf punks nick your damn seat.

This is a music video (and not just any music video, an Alien Ant Farm music video), so is not about total accuracy or verisimilitude, but still - when the audience is seen from behind, they’re pumping their arms in the air in a fairly uniform manner, but when they’re seen from in front, they’re all over the place. God damn it, director Marc Klasfeld.

This is how Mitchell got away with that haircut, by being goofy and likeable. The band were all high school friends, and seemed like they were having a massive laugh. Hey, you know what’s fun? Being young and stupid.

That’s what 3D cinema always seems to be promising, but it never fucking delivers, does it?

The first of several movie pastiches, with AAF donning the overalls of 1985’s Ghostbusters (as well as doing an extremely decent go at the dance that happens at the end of Ray Parker Jr’s music video for the theme song he wrote for it).

This isn’t what the guns do in Ghostbusters, of course – people get slimed, like this guy has been, but it’s ghosts that do the sliming. Still, poetic licence.

Red Vines are a vaguely liquorice-y sweet that have somehow become synonymous with the cinema in the US.

Bassist Tye Zamora is an extremely good mover for a huskier gentleman. A six-string bass player, brown clothing enthusiast and comedy face-maker extraordinaire, Zamora left the band in 2006 to go to college, rejoining in 2008 before leaving again in 2014. He now fronts two bands: \’mēk\ (pronounced meek) and ApeShit.

The Robot was created as a dance in the 1960s, although similar techniques (which later became important in breakdancing) had been used in mime since the 20s. It became famous when the Jackson Five employed it while performing Dancing Machine on the US TV show Soul Train.

Guitarist Terry Corso looks completely different these days – he’s lost loads of weight and is completely covered in tattoos. He initially left the band in 2003, with the band releasing a statement worded like a divorce and citing “irreconcilable differences”, but later rejoined it. "We're family," he said. "We've been friends since we were in high school. With family comes all your stupid little grudges that don't mean anything. Time heals all wounds." In 2015 Corso sued a hospital for malpractice, alleging that they left gauze inside his abdomen after surgery for diverticulitis. In 2016 he was fined £85 after punching a fan at a Chester gig who he thought had thrown a pint of urine at him.

The hole-in-the-bottom-of-the-popcorn trick is one of those things that nobody has ever actually done but has achieved semi-mythical status. It’s sexual assault. Don’t do it. Don’t ever trick or force anyone into touching any part of you they don’t want to touch. It’s not funny, it’s not cheeky, it’s a crime.

1971’s Willy Wonka & the Chocolate Factory, now, with AAF transformed into Oompa-Loompas, the hang-on-is-this-slavery? workers that powered the titular factory.

In another nod to the film, this gum-snapping, soon-to-well lady is an homage to Violet Beauregarde.

It’s pretty fun that they made everyone’s little beards green as well.

It seems kind of disproportionate as a punishment really, swelling her to a ridiculous size and flinging her across the crowd like a beach ball at a festival, when all she’s done was snap her gum. The touch-my-dick-against-your-will guy just got a slap.

Heyo! It’s the late, great Pat Morita (1932 - 2005), best known as Mr Miyagi from the Karate Kid films. He can also be ween in Weezer’s Buddy Holly video in archive footage from the sitcom Happy Days. “Dryden-san, shut up” is brilliant.

Symmetry is really nice, but if you were Mike Cosgrove the drummer you’d potentially be a bit pissed off in this bit, barely visible behind a singer making himself as big as possible.

Zamora’s technique as a backing vocalist is unusual but effective – he essentially barks the lyrics slightly after Mitchell, but it works, it’s fun.

You didn’t see joy like this in a lot of music videos at the time. Just a chunky dude dancing, smiling, playing the biggest bass in the world, having a lovely afternoon.

1990’s Edward Scissorhands now, and a pretty amazing make-up job on Mike Cosgrove, who along with Mitchell has been in the band from the get-go. He also plays with Decadex and Mystery Schools, and briefly joined the reformed version of the 1980s thrash band Excel.

There has never been a faker-looking Afro than this. There’s obviously a fun gag coming up, but shit, could they not have found a slightly less crappy wig?

Wahey, he’s got an AAF on his head now! That’s… not how hair works?

The usher is the only one left in the real world, a bit like the boy with the bad leg in the old German folk tale the Pied Piper of Hamelin. Right? Right?

A lot of love for the Neighboursesque bass ending from Zamora there.

And that’s your lot. What a silly video. Still a massive banger of a tune, still a big ol’ laugh of a video, lovely stuff.

And they'll be joined by special guests ’68.