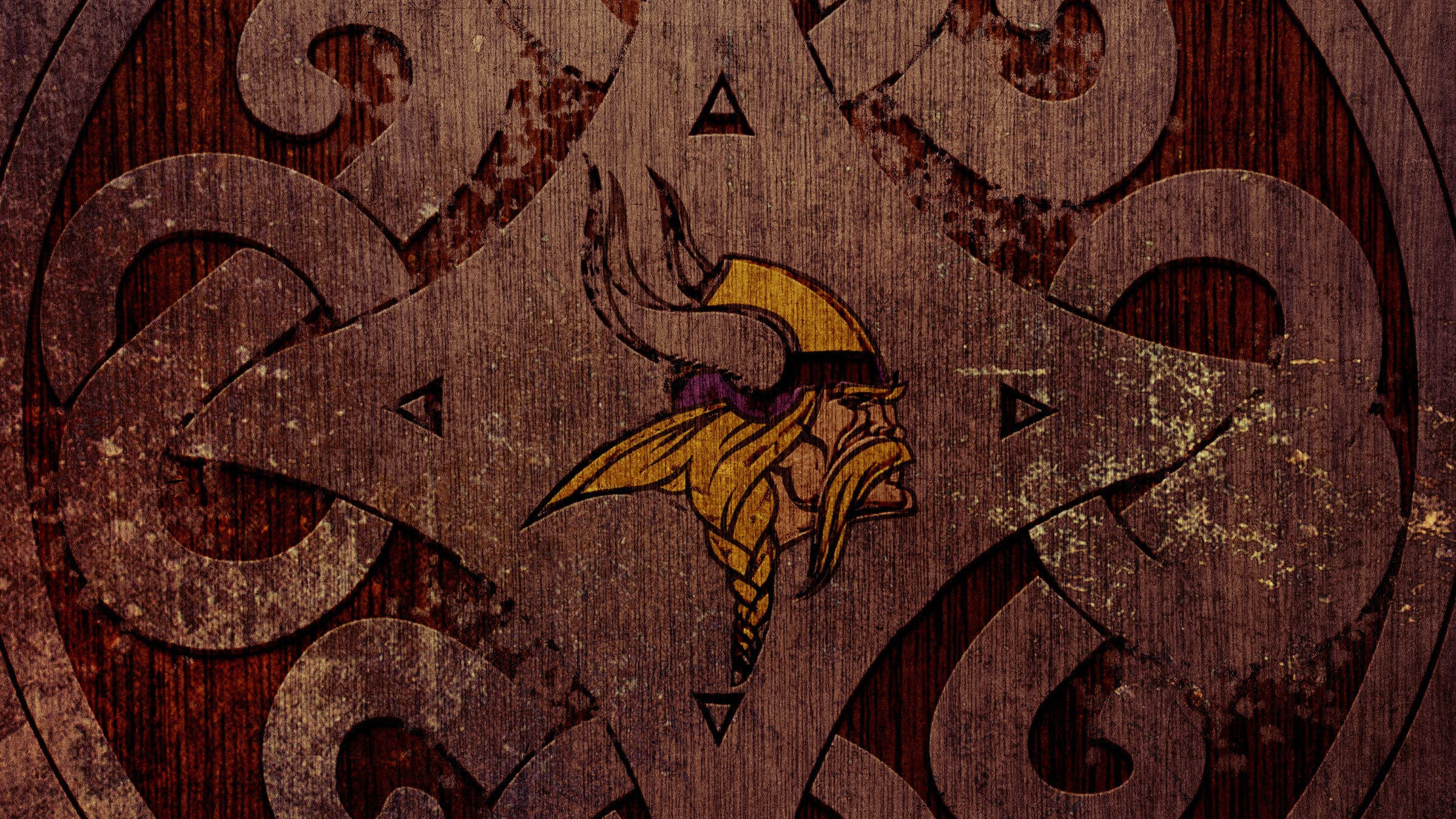 American football players and ancient Viking warriors have a lot in common, when you think about it. Both have riches and acclaim tossed at them for committing feats of incredible strength in an insane ballet of conflict...and both are living for that final glory, putting everything they have on the line so that they can be remembered into eternity. One wouldn’t be surprised to find out there’s a football Valhalla, a giant sports bar in the sky where fallen all-stars can watch the game and gruffle wings until the world ends.

If you squint a little, the Lombardi trophy even looks like Mjolnir, the legendary hammer of Thor:

Obviously, the greatest example of this is the Minnesota Vikings. They have horns on their helmets, they hail from a land of ice and snow, and they are known for being huge and intimidating on the field (like much of the northern US, the Great Lakes states are home to a huge population of Scandinavian immigrants, so you also have dudes with last names like 'Elflein').

However, some metalheads who own drinking horns might have noticed there is a disturbing lack of Viking metal played at your average Minnesota Vikings game. Which is a damn shame: surely a Packers defensive line would be more intimidated by At Dawn’s First Light than Cha-Cha Slide. Obviously, the players need to be more insistent with their staff about which bands best represent them, and make sure that when they head out onto Soldier Field this Sunday, they do so to some massive medieval riffs.

To make things easier, here's a pairing of Minnesota Vikings players and their Viking metal equivalents. We’ll keep our ears peeled on Sunday to see if anyone took our advice.

In many ways, Rudolph is the quinessential Viking: he’s huge, he’s a much-loved local celebrity, and he’s regarded as an absolutely powerhouse on the field. But at the same time, he’s also known for being a husband and father, and he and his wife Jordan are famous for their charity work. All of this paints him as a gentle giant, but a giant none the less.

Who else could match Rudolph but quintessential Swedish Viking metallers Amon Amarth? The band's sound is truly Kyle Rudolph-sized (as is their looming frontman), and they’re notorious for their relentless live performances. And yet, Amon Amarth’s lyrics are often chivalrous and poetic, telling tales of heartbroken revenge (First Kill) and standing up against oppression (Slaves Of Fear). It’s also widely regarded that though singer Johan Hegg is fearsome onstage, he’s a lovely dude in person. That mixture of strength and affability make them and Kyle Rudolph peas in a humongous pod.

Fast, polished, and highly proficient, Stefon Diggs is one of the NFL’s standout wide receivers, and his return to play Sunday night will hopefully give the Vikings an advantage over the Bears. As the Geico commercial he’s in puts it, everything sticks to this guy's hands. But Stefon also seems like a complicated and emotional dude -- he's unafraid to cry during interviews, and has shaped parts of his career around being close to his two younger brothers, and that humanity has become part of his appeal.

It’s undeniable that Tyr from the Faroe Islands play some of the most enjoyable Viking metal out there, with all the galloping rhythms and wily guitar harmonies that make metal about the ancient world fun. And yet there’s always something a little complex about their music, especially in their use of uncommon time signatures and wonky, confusing riffs. We'd encourage Mike Zimmer to play some for Diggs to get him psyched up this Sunday, but their music does make the listener want to swing a sword around, and that's gotta be some kind of penalty.

Originally from the U.S. Virgin Islands, Linval Joseph is a gigantic former weightlifer, which make him the perfect defensive run-stuffer. But his size and the sheer strength that comes with being a high-school Powerlifiting Champ also turn him into an unstoppable force once he gets moving, and if he gets ahold of the ball, watch out. As Saints guard Larry Warford puts it, "He's an absolute monster."

Like Linval, Unleashed frontman Jonny Hedlund is known for being a hefty, imposing dude, and Unleashed's brand of muscular Viking death metal is intimidating to say the least. Also like Linval, Unleashed get shit done. The Swedish quartet are prolific as hell, and their albums don’t mess around with hurdy-gurdies or epic poems, they just charge forth and stop the enemy in their tracks. Linval marching onto the field to Midvinterblot would be more than enough to make Yggdrasil tremble.

As a wide receiver, Adam Thielen has an incredible ability to be open exactly when he's needed. He's also hometown hero, who grew up in Minnesota worshipping the Vikings, and pursued his dream despite all the odds. Even after he went undrafted in 2013, Adam remained determined, and attended a rookie tryout where he got noticed by the team. Now, he’s one of the NFL's best receivers, and an icon to the people of Minnesota.

Similarly, Sweden’s Grand Magus is an underrated gem of a band. Their brand of no-frills Viking biker doom endears them to old-school metalheads, who appreciate their total earnestness. And while every other Viking metal band was adding folk elements during the genre's big heyday in the late 2000s, Magus soldiered on with their traditional heavy metal sound, happy to be following in the footsteps of bands like Maiden, Metallica, and Bathory. Shine on, you crazy diamonds.

2018 is proving to be Danielle Hunter’s year, as the Vikings’ defensive end is emerging as one of the team’s most insane pass rushers. The native Texan hasn’t always been a sure thing, though -- out of college, he was known for being fast and putting in extra effort, but not displaying the on-the-spot technique and discipline needed to go elite. However, this year, Danielle's gotten a sack in almost every game, and seeing as how he just signed a five-year $72 million deal with the Vikings, people around him are noticing.

Sometimes, it feels like Finland's Ensiferum are just another beery metal band with Scandinavian folk influences...and then you catch them at a festival, and they knock you on your ass. While their peers have come and gone, Ensiferum remain treasured and respected by metalheads in the know due to their strength, speed, and stamina. The band's slow, patient cementing of themselves into the European metal elite smacks considerably of Danielle Hunter's steady rise to acclaim.

Let's be real here: a lot of Vikings fans don’t want to admit that famed former Washington QB Kirk Cousins is now their quarterback. As sports journalist and avowed Vikings fan Drew Magary points out in his yearly Why Your Team Sucks profile of the team, Cousins possesses “a brand of corniness so robotic and so toxic that it could burn through steel.” But Cousins is a seasoned player whose record speaks for him, and like him or not, he's the now the leader of Minnesota's pack.

Along those lines, no serious Viking metal fan wants to admit that Manowar are the genre's forefathers. They want to act like Viking metal is based entirely on gruesome legends and historically-accurate descriptions of battles, not the corny, insane rantings of a band who bids their listeners, “Stand and fight together, beneath the metal sky!” (...what?) But it’s true -- Manowar were the first real Viking metal band, idolizing the ancient Norsemen in songs like Blood Of My Enemies and Sign Of The Hammer. And while they may be cheesy, you have to admit that those songs...kind of rule. Sorry, guys, you just have to own it.