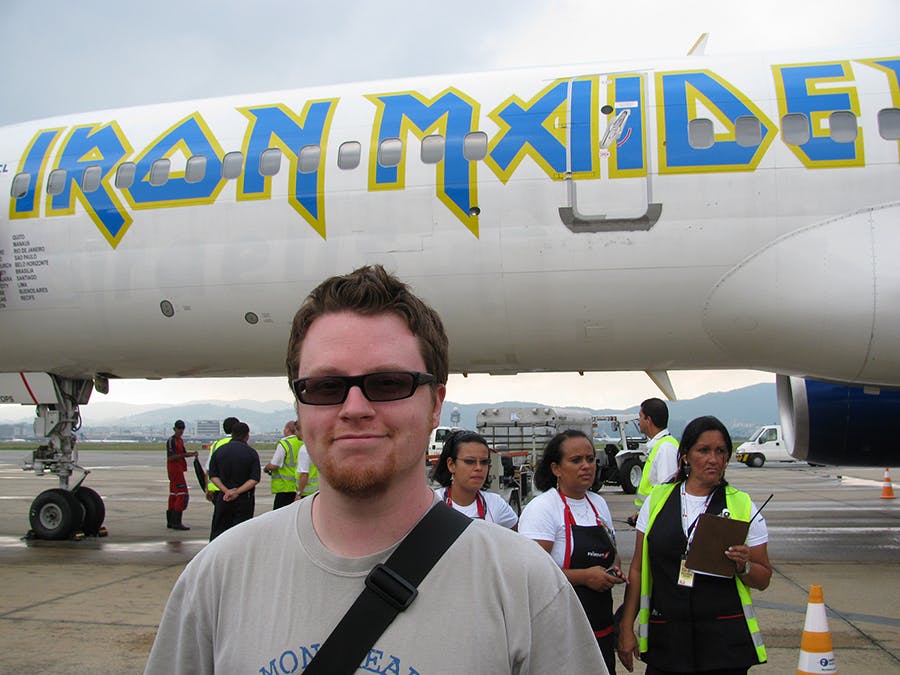 Ten years ago today, Iron Maiden kick-started the first leg of their Somewhere Back In Time world tour. And shortly after, Kerrang! writer Simon Young joined them on Ed Force One. This is what it's like to join metal legends on their own personal aeroplane…

March 15, 2009 will forever remain seared into my memory. As an ardent Iron Maiden fan from the age of 12 – the Seventh Son Of A Seventh Son onwards – this particular assignment remains my most memorable to date. I couldn’t – and still can’t – quite believe I was getting paid to cover the band in Rio de Janeiro and São Paulo, and join them on their very own Ed Force One 757 aeroplane as it bounced between shows on the South American leg of their Somewhere Back In Time world tour.

The brief was simple. The late, great photographer Ashley Maile and I were to follow the band as they performed two Brazilian shows and attend the premiere of Sam Dunn and Scot McFayden’s documentary Flight 666 at the Cine Odeon BR, and give a taste of what it was like to be flown by one of the greatest metal vocalists of all time. I don’t mean to sound like a massive, bragging wanker but I will when I say that I’d flown with the band on one other occasion. Nine years before, I got to see the band on the opening dates of their Brave New World tour at the Festival des Artefacts 2000 in Strasbourg, and the following day at the Dynamo Open Air festival in Goffertpark, Nijmegen. I was given the honour of accompanying the band in a Cessna 421B Golden Eagle, nicknamed the Bruce Goose. There must have been 12 seats on there and it was fairly noisy.

Kerrang!'s Simon Young, proving his Maiden credentials as a teenager

Once I buckled my seatbelt, I sat slightly overwhelmed as I was surrounded by my heroes; I chatted to drummer Nicko McBrain’s about his tour diary for the band’s official site and concentrated on keeping my shit together. But, due to an early start and habit of falling asleep during flights, that’s all I remember of the journey; I still regret the moment I thought I’d close my eyes for a few minutes and woke with a start as we landed. What an idiot.

I wasn’t going to fall asleep this time. Not a chance.

For Maiden’s Somewhere Back In Time tour, the decision to charter their own plane was not to satisfy the whims of a phenomenally successful band, but one of necessity. Ed Force One allowed the band, crew and stage production to circle the globe three times over in a fraction of the time compared to more conventional means.

“If we did it the old school way, we’d still be playing on our last tour,” said Bruce. “For example, it would take three different flights to get to Quito, Ecuador, using commercial air transportation. The customs and immigration formalities means a lot more can go wrong. The beauty of having the aeroplane is it means we can play more shows in fewer days and have more fun.”

The Somewhere Back In Time World Tour poster

But being the pilot of a heavy metal band, we learned, had its downsides.

“Flying does curtail the post-gig fun for me at times, but you must rest and adopt a zero alcohol policy,” he explained. “It’s the industry standard. You can’t report for flying with any alcohol in your bloodstream. Eight hours before that, you don’t consume any alcohol whatsoever.”

So, March 15. It was an unusual sight to see the vocalist appear in the reception of Rio de Janeiro’s Hotel Intercontinental, dressed in his Astraeus pilot’s uniform – crisp white shirt, tie, pressed trousers and blazer – and go through the revolving doors. It caught the fans waiting outside unaware, albeit momentarily. After signing autographs and posing for photos, our group were whisked into a mini-van and made the 20-mile journey to the airport. There, we entered Base Aérea de Galeão, home of the Brazilian airforce situated inside the city’s sprawling airport and Ed Force One stood waiting for us on the tarmac.

Ed Force One in all its glory

It was gigantic, gleaming in the midday sun. The body emblazoned with the band’s logo while Eddie’s menacing face was plastered over the tail; it looked fucking cool. As we boarded the plane, 12 huge, dark blue leather seats were reserved for the band, manager Rod Smallwood, family and crew, while a further 60 seats behind those offered more leg room than your average London flat. At the back, souvenirs of their recent shows were stored safely and neatly, including a pile of embroidered sombreros. I resisted the temptation to try one on. Again, another regret that haunts me nine years later.

Before take off, myself and Ashley were offered a tour by our pilot.

“We know exactly each piece is on the aeroplane,” said Bruce pointing at things I didn’t understand. “It’s just arithmetic. It’s like a balance beam. We know where the cargo is, how much people weigh and how much gas. We just crunch the numbers and get on with it.”

As we took our seats, we were offered Pringles (salted), drinks (soft) and were made to feel like royalty by the flight attendants, before a familiar voice burst from the speakers.

Assorted treats on board Ed Force One

“Please pay attention to the safety demonstration,” said the pilot. “This plane is a little bit different, a little bit special compared to some other 757s you may have flown on. The flight will be 47 minutes, so sit back and enjoy the flight.”

I remember grinning in disbelief at it all. The Pringles were a welcome snack to aid my raging hangover (downing caipirinha cocktails seemed like such a good idea the night before) and the view from my window was astonishing.

Seven minutes before we landed at São Paulo’s Guarulhos International Airport, the PA system burst into life once more.

“We’ve just been asked to say ‘Scream for me, Brazil’ by air traffic control,” sighed Bruce. “The things you’re asked to do…”

Unfortunately, our pilot did not make a sound as we approached the runway and made a textbook landing on the tarmac, hours before their biggest-ever show at Autódromo de Interlagos.

Now that's how you travel on tour. Sharing a splitter van doesn’t hold quite the same appeal these days…