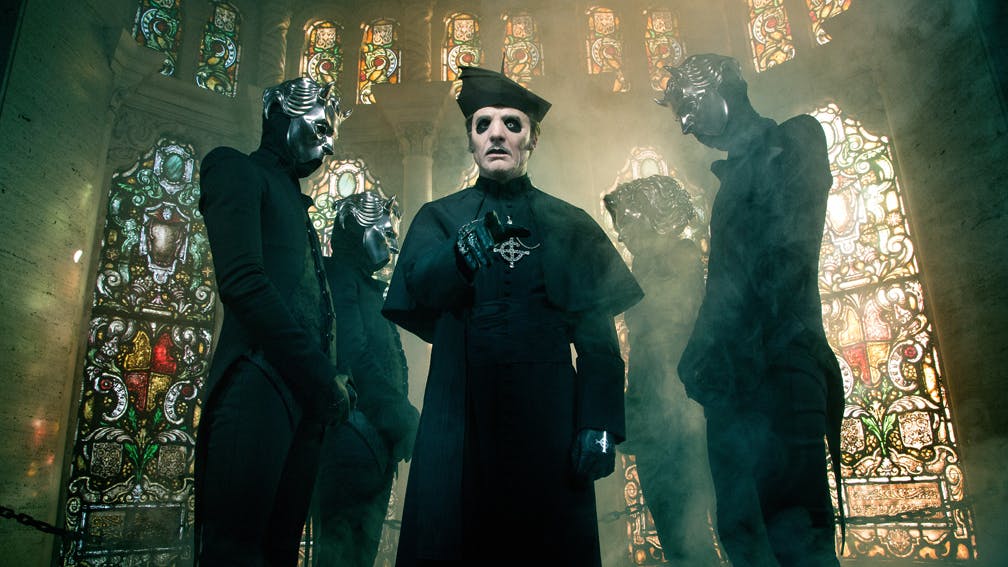 For all Ghost’s obsession with the dark side, they’ve always given the impression of tongues wedged firmly in cheeks. Their satanic shenanigans have largely offered B-movie fun and escapism wrapped in supremely infectious, doom-lite songs. If you caught their spectacular set headlining Bloodstock last year, you’ll probably recall, among the enormous stage show and genuinely impressive levels of showmanship on display, there were also bad jokes and a hokey accent from Papa Emeritus III that was more Sesame Street’s Count von Count than Transylvania’s most feared nocturnal bloodsucker.

But that Papa has now been supplanted, with the creepily decrepit Papa Zero ushering in a new era, alongside a sort-of new frontman in the comparatively thrusting Cardinal Copia. That process in itself has resulted in a complex storyline that’s not the easiest to keep track of, but it does give Ghost the perfect opportunity to reinvent themselves – and this time out, they’re taking us into a much darker world than the one they previously inhabited.

The spooky intro of Ashes sets the scene, with children reciting Ring A Ring O’ Roses over an ominous droning buzz. As this gives way to the Black Death-themed Rats, it seems like business as usual. But closer attention reveals the song to be both allegorical and timely. ‘In times of turmoil, in times like these / Belief’s contagious, spreading disease,’ croons the Cardinal, as the Nameless Ghouls build a metal structure so polished you could see your own pustulating buboes in it. There’s a harsher bite embedded in the chorus, however, to go with the grittier theme, which portrays destructive ideologies in the current cultural and political landscape as a modern-day plague.

You might not think you could get any more infectious than a song about plague rats, but that’s only until you hear Dance Macabre. If Square Hammer, from the Popestar EP, smashed Kiss’ disco-rock anthem I Was Made For Lovin’ You into shards you could cut yourself on, it’d sound like this.

Elsewhere, Faith follows a big beat and tumbling guitar leads into another flawless melody and more musings on the nature of belief, before See The Light takes the baton for a stately march, with Cardinal Copia declaring, ‘Every day that you feed me with hate I grow stronger.’ Again the lyrics are open to interpretation, but they mix a bitter taste into an Alice In Wonderland reference without name-checking Lucifer once. He does make a brief appearance in the fantastic and fatalistic Pro Memoria, but even here, it’s a cameo, with the Grim Reaper as the real star of the show.

As with all Ghost albums so far, Prequelle is relatively brief. With one of its 10 tracks being the intro and two being instrumentals, it’s really down to the bones here. Said vocal-free tunes are ace, with Miasma exploding into the best saxophone solo you’ll hear in 2018, and Helvetesfönster reminiscent in parts of The Eagles’ psych-rock classic Journey Of The Sorcerer (or the theme from The Hitchhiker’s Guide To The Galaxy, as it’s now more commonly known).

From gritty social commentary to ’80s metal cheese and retro-futuristic space rock, this is an album that sees Ghost spreading their dark wings. A new age is truly upon us, so let the Ghouls be your guide.

Ghost's Prequelle is available now via Spinefarm. Check it out below.