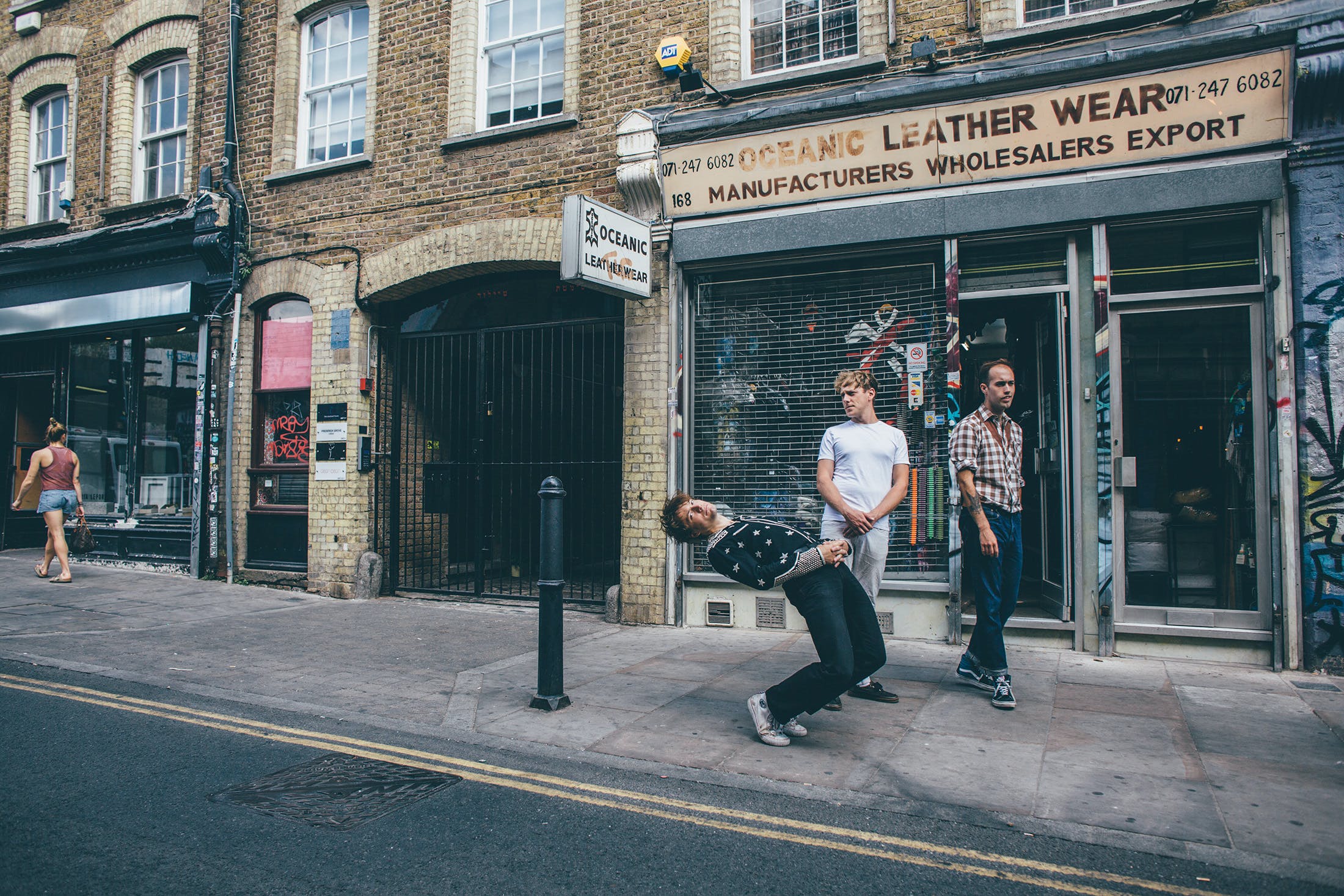 Luke Bentham was born for the stage. That’s the impression you get when you watch The Dirty Nil frontman play, blowing bubblegum during guitar solos, strutting around in a studded shirt emblazoned with stars and a lightning bolt on the back, as fake smoke spews from his guitar’s pickups into a haze of raucous pop hooks and punk rock exuberance.

The trio – completed by drummer Kyle Fisher and bassist Ross Miller – tour so doggedly that Luke has spent his past two birthdays onstage. This year’s 28th celebration was a Jack Daniel’s-swigging affair on 2000trees’ main stage, while the audience sang Happy Birthday and he sparked up a joint. The year before, Luke stood in front of 50,000 people, opening an outdoor gig in Quebec for The Who, one of the most iconic bands in all of rock history.

“A meaningful, existential rock’n’roll experience,” is how he sums it up on reflection, talking to Kerrang! during a rare spell at home in Hamilton, Ontario as the band gear up for the release of imminent second album Master Volume. “There’s a power and longevity to playing that specific concert. It was the ultimate high-five moment.”

That show marked a full circle for Luke, completing a line that can be traced right through the hundreds of gigs he and his band have smashed through each year. That’s not to mention the thousands of miles travelled back home in the quiet suburb of Dundas, Ontario in 2006, when a 16-year-old Luke and his friend Kyle would pore over footage of The Who performing A Quick One, While He’s Away on The Rolling Stones’ Rock And Roll Circus movie. It was then that the seeds of The Dirty Nil and an enduring fascination with rock’n’roll showmanship were sown. “Kyle and I hung out every day and talked about Black Sabbath and Weezer, but we couldn’t stop playing that one video of The Who,” Luke recalls with childlike giddiness. “The kind of feeling that we got; chills down your spine, looking at each other, constantly smiling and pointing out certain moves that they’re doing. They’re knocking shit over and things are going wrong, but they blow everyone away. And they’re having fun. That video is one of the most potent ingredients in our DNA as a band.”

It was another group from that same show that would give them their band name, however. Riffing on The Dirty Mac – a one-off supergroup whose ranks included John Lennon, Keith Richards and Eric Clapton – Luke and Kyle christened themselves The Dirty Nil. They began performing around Southern Ontario as a two-piece, with Luke working on his stage theatrics and props to fill out their sound. “We always had taste. We never got Arcade Fire-y about it,” he assures us. “We would just try bigger amps with bigger skull flags on them. But no amount of skull flags can make up for a [lack of] bass player.”

Enter bassist Dave Nardi, who rounded out the power trio until his departure in 2016. In 2009 the band booked their first tour – a ramshackle stint of Canada’s east coast – and began racking up the miles. Plenty of other firsts quickly followed. Their debut single, 2011’s Fuckin’ Up Young, attracted attention from fans and booking agents beyond their local area. Their first extensive tour of America in 2013 offered a slew of experiences previously only glimpsed in movies: eating giant hotdogs, firing AK-47s in Texas and becoming intimately acquainted with dingy motels. One tour that sticks in Luke’s mind was supporting fellow Canadians Billy Talent on a run of European arena dates in 2016, following the release of their debut album, Higher Power. After shows, Luke would stand and watch as road crew tore down the stages. “I was like Penny Lane in the movie Almost Famous, dancing in the confetti after the show,” he recalls. “Except I was dancing between beer cans like, ‘Life is beautiful and this is a fun thing I get to do.’”

Yet it’s no secret that the road takes its toll. The big city lights dull when you rub against the underpinning grit daily. Towns blur in a haze of hangovers, sleep-deprivation and long drives. And experiences that appear rose-tinted in the rearview lose their appeal when you see how life lived to its extremes burns people out. “I find America challenging now,” admits Luke. “So much of it just seems so sad; being exposed to poverty or people who have intense addictions. When I look back, Master Volume is the 28-year-old hangover following the trash-it-up 25-year-old on Higher Power. Not to say that there isn’t some partying on there, but it definitely talks about consequences more.”

The Dirty Nil’s second album is both inspired by and a direct product of touring, with songs hashed out in soundcheck and demoed in gaps between tours. Always High and I Don’t Want That Phone Call are sobering wake-up calls addressed to friends whose habits have gotten out of hand. Meanwhile, Super 8 details Luke’s love-hate relationship with the cheap and not always cheerful motel chain.

“A lot of them have of bugs and lizards I’ve never even seen before. You learn a lot about the world when you’re there,” says Luke, whose wry sense of humour often spins positives from negatives. “There are plenty of strange exchanges, like people committing crimes all night or doing weird shit. It was my attempt to express what being on tour was like.”

Friends and lovers left at home are also casualties when you’re on tour most of the year. It is partly why Dave left the band in 2016. Fortunately, a replacement presented itself in Luke and Kyle’s roommate, Ross Miller. As is typical with Luke, his first significant experience with Ross is a road story. In January 2013, Luke was due to play guitar with Single Mothers as the opening act for a newly reformed Quicksand, when his ride across the Canadian-American border didn’t show. Oh, and he didn’t have a visa. Ross came to his rescue. “He got me across the border – somewhat mildly illegally – for the sake of rock’n’roll,” Luke says fondly. “A lot of the more interesting parts on this record are a result of having somebody like Ross [with us]. He’s musically fearless and has experience playing lots of different music. Everything was more on this album: more practice, better quality studio, having a producer who wasn’t our friend. And to be honest, it was more fun to make.”

Appropriately for a record titled Master Volume, it even sounds bigger and more dynamic than Higher Power. Yet for songs so full of power-pop hooks and faith in rock’n’roll salvation, the presence of death looms large. Luke imagines himself dying in car crashes on the opening two tracks alone, which is perhaps understandable when such sights are part of the everyday scenery travelling between shows. Another example of the gallows humour that is both Luke’s natural disposition and a coping mechanism.

“You slowly begin to blot life hazards like that out of your thoughts because it’s too exhausting to live with them on your mind,” he says, before once again accentuating the positive. “It’s part of the brotherhood of a band on the road – it almost makes you smile. We’re all in it together.”

Smiling in the face of danger?

With the band about to embark on another extensive tour of the UK and North America, the road ahead for The Dirty Nil shows no sign of stopping anytime soon. And Luke for one, wouldn’t have it any other way.

“When people in Germany, England or fucking Texas are singing your songs, that’s when things are most fun and meaningful as a band. Experiencing that together is a goddamn beautiful thing.”

The Dirty Nil's Master Volume is out now on Dine Alone Records. The band tour the UK this month. More info here.

The Dirty Nil say a loving farewell to local Canadian convenience store Big Bear – which they say “was our clubhouse, our pirate ship, our prison”.