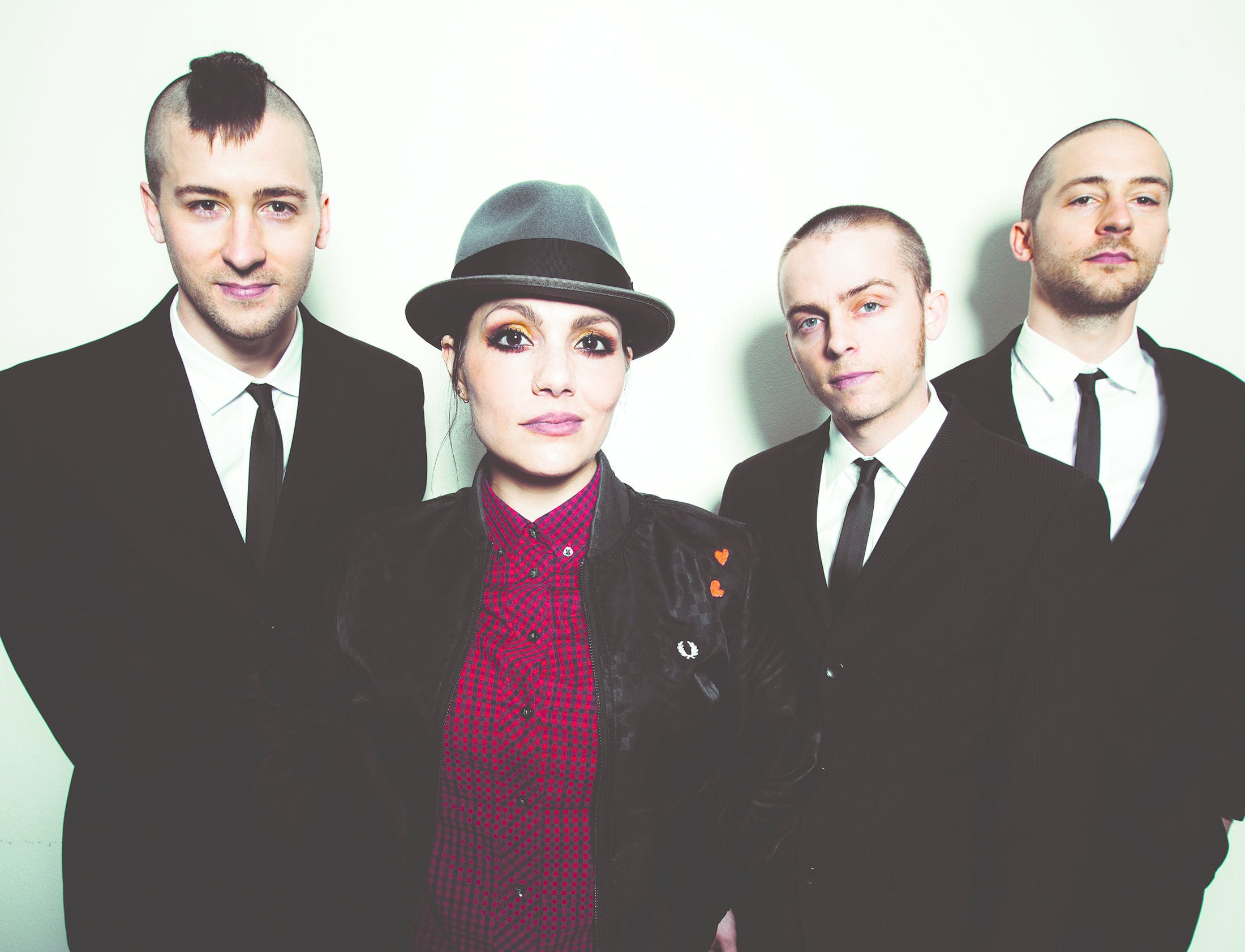 The punk rock awakening of Aimee Interrupter came when she was eight years old. Born Aimee Allen and today the singer with LA’s fast-emerging The Interrupters – a band who have arrived alone to rescue modern American ska-punk from its dreadful reputation – as a young child she took her pocket money and her bike down to the local record shop and bought two cassette albums by Joan Jett & The Blackhearts.

Joan first surfaced as a member of the teenage proto-punk band The Runaways, and in 1979 would produce GI, the wildly revered album from the doomed but timeless Germs. She is also one of the few exceptions to California punk’s culture of male hegemony. “Basically I had a pretty rough upbringing,” Aimee says today. “I came from a broken home. I ended up in a foster home at a young age, and moved from school to school. I felt lonely, like I was looking for a family and to belong somewhere that somebody wanted me.”

So profound was Joan Jett’s influence on Aimee Interrupter that years later, while attending one of Joan’s shows in New York City, the now adult fan bought flowers and lay them at the performer’s feet. Joan Jett called a halt to the song she was playing and asked her admirer her name, and thanked her for the kindness. As a child, when Aimee was in trouble the two most important cassettes in her life would be confiscated. She compensated for this by learning to sing the songs without accompaniment for hours on end. “I was, like, ‘You can take my tapes away, but you can never take my music,’” she says, “‘You can’t crush my soul.’”

Today this spirit is splayed all over Fight The Good Fight, The Interrupters’ imminent and brilliant third album. ‘I don’t care if you love me/Don’t care if you don’t’, she sings on Gave You Everything. Elsewhere, on Got Each Other, on which the band are joined by Rancid, the sense of community that Aimee Interrupter longed for shines like the lights from a city on a hill: ‘We will be your confidants/Your sisters and your brothers/We don’t have much but we’ve got each other.’

When the singer first heard that song played back in the studio, she cried. She also cried at the sound of Olympia WA., the first Rancid track she ever heard. At the time she was living in the North Western city that gave the song its name, although later she would move to Montana. It was here that she began singing in bands, but while in possession of a voice she lacked comrades who were willing to travel south to Los Angeles in an attempt to find traction as professional musicians.

So, Aimee travelled to California alone. She waited tables and found a place to live. Every single night she would stand outside the Roxy club, one of the hubs of the Sunset Strip, and ask perfect strangers if they were in a band that needed a singer, or if they’d care to start a band with her. She was 18 years old.

In about the time it takes to count in a punk rock song, she had a group, Forum. They played one gig and were promised a record deal by MCA. When this fell through, Elektra Records signed her to a solo contract. She even recorded an album, I’d Start A Revolution If I Could Get Up In The Morning, parts of which were produced by Mark Ronson, who would go on to work with Amy Winehouse. Despite this pedigree, the album remains unreleased.

“Signing a solo deal was a young and dumb move,” says Aimee. “I call it my experimental years. What they did in terms of the production behind me on that album was all over the map, but the vocals and the melodies were all punk. I have always been a punk.”

So too has Kevin Bivona. Today the guitarist and co-songwriter with The Interrupters, in 2009 Kevin was a studio technician and a jobbing musician with an act called the Telacasters. He also humped gear for other groups. A face on the scene, he could be found at shows such as Bad Religion at the Hollywood Palladium and, crucially for our story, the Coventry ska band The Specials at the Key Club. He met the woman who would become Aimee Interrupter while on tour and the pair discussed writing songs for what was still her solo career. The only trouble was, Aimee was tiring of flying her flag alone. The pair began writing, but in effect they were sowing seeds. Within two years, The Interrupters were born.

In plotting this course, Kevin Bivona believes there is a parallel to bands such as Green Day – who The Interrupters supported on three continents on that group’s Revolution Radio tour of 2017 – and The Offspring, both of whom, it is crucial to remember, formed at a time when there was no precedent of American punk rock bands becoming successful. “As musicians we want to be able to play music for our living,” he says. “But starting a ska-punk band in 2011, this really wasn’t us thinking, ‘Wow, this is gonna be the one that puts us over the top!’ We weren’t thinking five years into the future. We weren’t thinking three records into the future.”

But with immediate effect, wheels were in motion. Even before The Interrupters had decided upon their name, Rancid’s Tim Armstrong had heard some of the material Aimee and Kevin were working on. He himself had once played guitar in the pivotal ska-punk band Operation Ivy. And in a similar act of faith and endorsement, as a member of Rancid he had once been promised a record deal by Brett Gurewitz at Epitaph, before the label owner had heard a single note of music. “He is our scene’s Bob Dylan,” Brett insists today.

More than a generation on, Tim is the co-owner of Hellcat Records, part of the Epitaph empire and the label to which The Interrupters would duly sign. But even at the earliest opportunity he expressed a desire to get involved, in what he initially imagined would be a songwriting capacity. When the band was born, however, he became their producer and Fight The Good Fight is now the third Interrupters record he has overseen. It might also be the best album of its kind since Rancid released their Indestructible LP 15 years ago.

“It makes me sad when people have a bad image of ska music,” says Kevin. “But we have always drawn our inspiration from bands like The Specials, who play ska music but with a punk attitude. It was a unified scene. It was mixed race and it was socially conscious. But the shows were a party. You could say something important and stand up to oppression while having a party.”

American ska-punk music has latterly tended toward the comedic and the hopeless in more recent memory. But The Interrupters are here to make the case both for the defense and the prosecution. Each night before they take to a stage in whichever city they find themselves, on their tour bus they will watch the documentary film Dance Craze. Directed by Joe Massot and released in 1981, the picture profiles English groups such as Madness, The Specials, The Beat, The Selecter and others from a scene that was both radical and riotous. But these were dangerous times and not everyone approved. Racist skinheads were a constant menace, and Elvis Costello, who produced The Specials, sang of the close-shaven National Front that ‘You think they’re so dumb/You think they’re so funny/Wait until they’ve got you running to the night rally’.

In a different time – but, in America at least, not a wholly different context – it is this spirit that shines from within the core of The Interrupters’ music, and is the reason that already more than a thousand people will pitch up to hear them when they play in LA. It is this quality that might just see them go all the way.

“I definitely don’t want to put a ceiling on how big I want the band to get,” says Kevin. “If the music connects with a lot more people, well I think that would be great. However the music goes, and whomever it speaks to, I have no preference. But I also want to dream big for our future. I don’t ever want to put a limit on what we could do. I want us to become as big as the universe will allow.”

Over to you, universe…

Fight The Good Fight is out now on Hellcat Records. Check it out below. The Interrupters tour the UK in December. Dates and details are as follows:

album of the weekThe Interrupters

The Interrupters announce new album In The Wild, share lead single In The Mirror

Green Day, Fall Out Boy and Weezer have confirmed that their huge U.S. dates are going ahead this year – though there's a few changes…