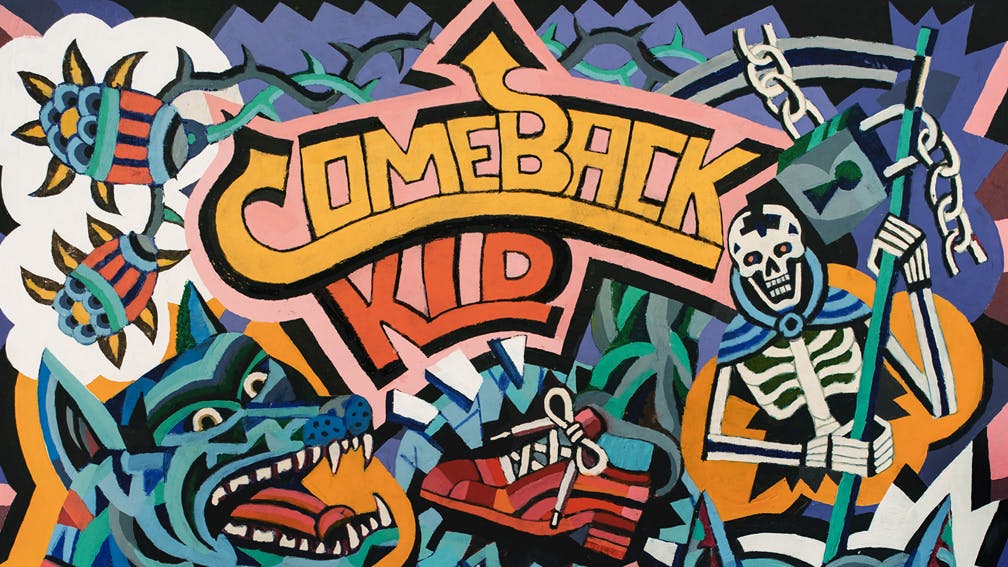 If uncertain times call for statements of intent, then a new Comeback Kid album is long overdue. For 20 years the Winnipeg cult favourites have poured out what ails them into their music. Fast, furious and discontented, it’s long since become a common sight to see members of other bands pack themselves into the wings of the stage to watch Comeback Kid tear through a live set even when they weren’t headlining a hardcore bill.

Their secret, like with all hardcore bands who achieve longevity, is that Comeback Kid have created a noise that is their own: packed with layers but simple in its ability to cause a visceral shift in the listener. Frontman Andrew Neufeld is adept at articulating both rage and introspection, while kickdrums thud against your temple, basslines yank songs into life and guitars appear in swarms, pick-sliding into focus before their riffs find their biting points and sink their teeth.

Heavy Steps arrives five years after their previous album, The Outsider, along with the feeling that a band with Comeback Kid’s propensity for touring and indifference to publicity would’ve made them one of the acts most painfully side-lined by almost two years of lockdown restrictions. The title-track’s kick-off summons a suitable sense of foreboding, its cry of 'Heavy steps on hollow ground!' ushering in an album that defiantly moves at pace over uncertain terrain, facing down fears that the world has more tests to throw at them.

No Easy Way Out follows, summoning a breathless bout of hardcore claustrophobia, its stripped-back assault of drums and vocals eventually allowing guitars to swirl up into formation. As has been customary on past releases, we get a couple of guest spots from their hardcore community brethren. First up is Joe Duplantier, frontman of French metallers Gojira, who dutifully barrels through his part on Crossed what feels like an octave lower than everyone else. Next is Deez Nuts’ JJ Peters on Everything Relates, a track that wouldn’t feel out of place on Comeback Kid’s faultless 2010 offering Symptoms + Cures, such is the way it manages to capture an inter-connected sense of chaos and making it sound bruised, brutal and melodic all at once. Think Four Year Strong with an empty shot of adrenaline sticking out of their collective necks.

Its second-half flurry of tracks makes sure that Heavy Steps doesn’t relent. Andrew’s vocals might occasionally be half-buried by the mix and swathed in reverb, but Dead On The Fence delivers both a groove and gang vocal that connect before a final, stomping beatdown that Shadow Of Doubt dusts down, before it and True To Form sharpen their buzzsaw guitars like they’re coming for your chest cavity. 'I’ve been an easy target too long!' Andrew exclaims on the latter, sounding like he’s anything but. In truth, almost every track on Heavy Steps sounds like lyrically it’s carrying a mix of existential score settling, cries for help and pleas for solidarity.

All of the above is more than welcome, now more than ever: if you feel short-changed, pissed off and have no idea what’s next, maybe there’s strength in numbers. And maybe Comeback Kid realise that. It’s good to have them back.

For fans of: Cancer Bats, Architects, Sick Of It All

Heavy Steps is out now via Nuclear Blast