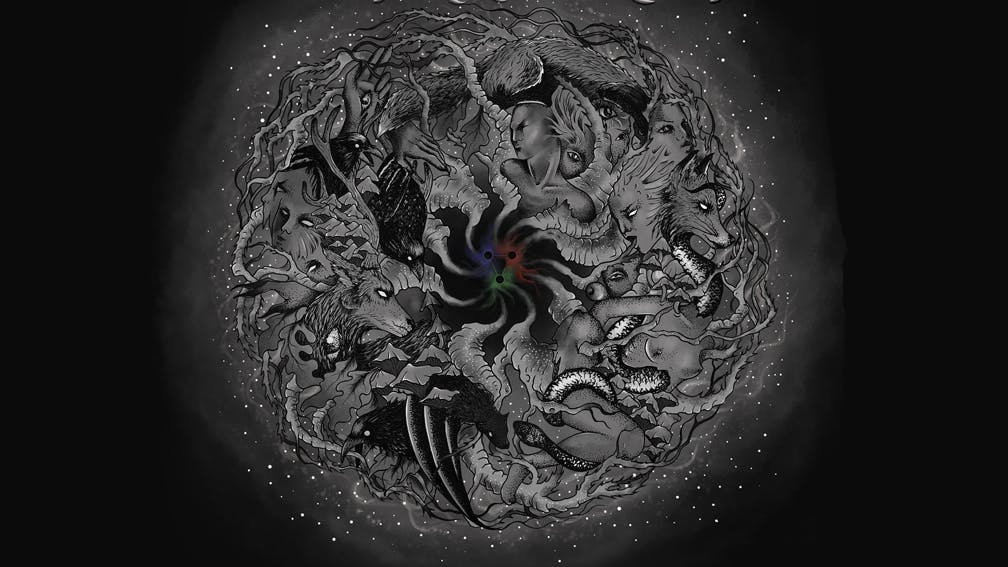 So dense, dark and wilfully opaque is the debut album from Epiphanic Truth that it’s hard to know where to begin. We can’t tell you much about the band themselves as they’ve tightly guarded their anonymity, posing for photos in monk’s habits and Halloween masks, with their label teasing only that members come from “a number of former and established acts”. On paper, the three-track, three-act structure of Bitter Triad: Bitter Psalms To A Sordid Species could look like the set-up for an EP, but there’s nothing insubstantial about its 42-minute runtime. And, when it comes to the music itself, there’s so much going on in the maelstrom of avant-garde death and black metal, doom, jazz, psychedelia and occultist ambience that it really does need to be heard to be fully understood.

“The album is a conceptual Triptych,” explains the knowingly pretentious press release, shedding little light to protect the tangled darkness, “hinged together by the dark triad of personality disorders – psychopathy, narcissism and Machiavellianism. Each point converging over the political future of civilizations enthralled by Social Media…”

In fairness, these songs do meet that abstract brief. Near 10-minute opener The Truth Of The Beast can be neatly divided into uneven halves, the first section bludgeoning away with the unhinged frenzy of some knife-wielding maniac cutting loose, before its closing sprawl fades out with a series of creepy, jazzy jingle. An Inescapable Verdict is put together with knowing self-indulgence, offering no easy way in but still somehow commanding listeners’ unwavering attention with its depiction of a prideful mind collapsing in on itself. Our Vile Roots Flourish Beyond Light, meanwhile, is the obvious star of the show, spilling out over half of the whole record’s run time and galloping across several spectacular soundscapes as it unfolds its carefully-plotted tale of Satanic intrigue.

For fans of truly complex heavy music, there is are awesome levels of mind-bending intricacy and atmospheric detail on which to get hooked here. Accordingly, although it would be to miss the point to guess at the bands from which Epiphanic Truth’s line-up is drawn, their sonic influences are obviously absolutely top-drawer: Enslaved, Akercocke, Oranssi Pazuzu and Esoteric to name but a few. Most crucially, though, they’re a band less interested in reheating the more out-there moments of heavy music’s past than creating strange new ones to shape an ever-more outlandish future.

Dark Triad: Bitter Psalms To A Sordid Species is released on May 21 via Church Road Records.

Read this: 12 of the most uplifting songs about Satan