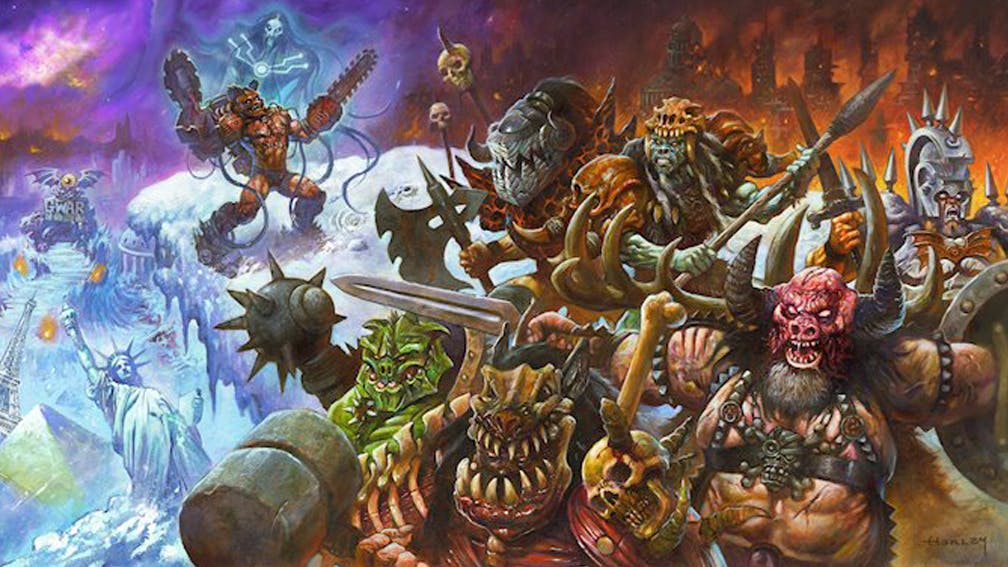 It can be easy to forget that GWAR still make studio albums. The grotesque Virginian shock-rockers were always more interested in OTT visuals and scatological humour than anything resembling nuanced songwriting (their name is popularly understood to be an acronym for ‘God, What an Awful Racket’), but since the death of iconic frontman Dave Brockie in 2014, it felt like the focus had shifted entirely away from recorded output and onto their slime-strewn live show.

After a couple of years where being spattered by other lifeforms’ bodily fluids went severely out of style, however, they’re back to prove they can deliver a good time without a trip to the laundrette across the 15-track sprawl of The New Dark Ages.

A bonkers concept album tied to companion graphic novel GWAR In The Duoverse Of Absurdity, this 15th LP follows a fast-and-loose narrative where current frontman The Berserker Blóthar and his not-so-motley crew must do battle with vomitous incarnations of themselves from a filthy alternate dimension. More striking than the latest batch of bizarro tongue-in-cheek sci-fi scenarios (drawing, seemingly, from Evil Dead threequel Army Of Darkness) are the drum-tight compositions on which they arrive, eschewing GWAR’s normal ramshackle charm in favour of the blade-slinging thrust of classic thrash outfits like Exodus and Testament, and occasionally even the historic sweep of Iron Maiden.

The New Dark Ages blends primal beats with moments of spacey, kaleidoscopic prog. Blood Libel’s outrageous 216 seconds (satirising a real-world antisemitic propaganda that accused Jews of murdering Christian boys to use their blood in religious rituals) arrives on a bed of weirdly distended riffs. Berserker Mode is a storm of swashbuckling six-strings. Hell, Unto The Breach even has a go at pendulous epic doom, sounding only slightly more pantomime than the pompous giants of that genre.

Crucially, rather than dulling the overall mood, the focus on seriousness in some parts emphasises the silliness of others. The route-one likes of Motherfucking Liar and Completely Fucked find GWAR at their most uncompromisingly bone-headed, but the unhinged Venom Of The Platypus is a shapeshifting delight that’s far harder to pin down, while Ratcatcher is a slice of cowbell-laden stupidity that’ll sink its teeth into your ear canal faster than a rodent trapped in a pillowcase. By the time we topple from the crazed bludgeon of Starving Gods into the absurd ambience of 11-minute closer Deus Ex Monstrum, one has to wonder whether they might’ve lost the plot. But that might very well be the point.

Mind-bending proof that GWAR remain the sickest band in the universe.

The New Dark Ages is released on June 3 via Pit