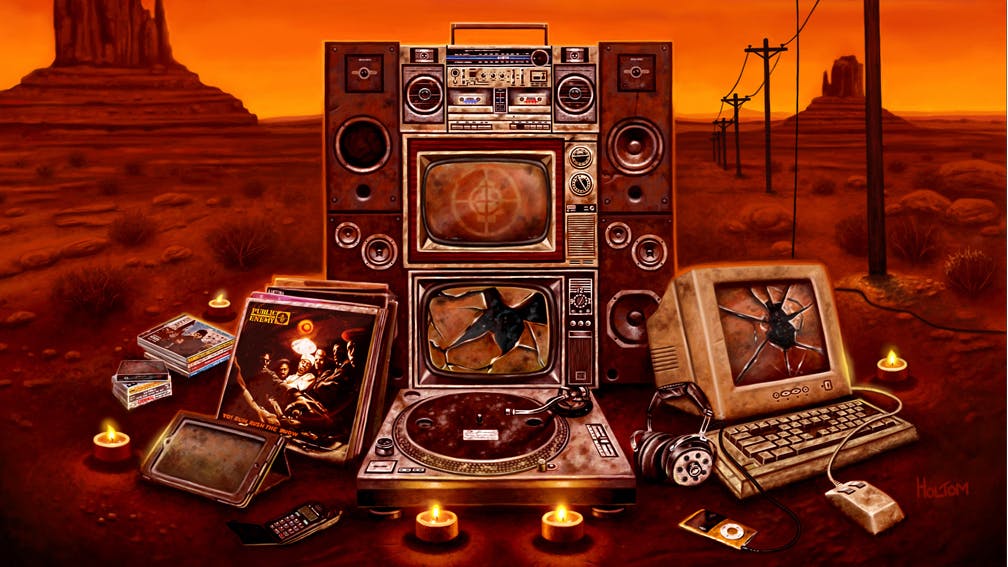 Public Enemy’s 15th outing is as much a time capsule of our annus horribilis as it is an album. Among other things, its 17 tracks and interludes capture the ripple effect of the deaths of George Floyd and Breonna Taylor and the global Black Lives Matter protests, the coronavirus pandemic, and the mounting tension over the impending U.S. election. ‘Vote this joke out, or die trying,’ implores Chuck D over DJ Premier’s eerie yet pounding beat on State Of The Union (Shut The Fuck Up). America’s 45th president is never mentioned by name, but his presence looms large. Extra points are awarded to Chuck here for rhyming ‘state bozo’ with ‘Nazi cult 45 gestapo’. Suffice to say, it is a song that seems destined to miss out on Donald Trump’s Spotify Wrapped list.

But if What You Gonna Do… has one foot firmly in 2020, the other is often simultaneously planted in yesteryear. Take Fight The Power 2020, for instance, a reprisal of their storming 1989 classic updated with help from Nas, Black Thought, Jahi, YG, Questlove and Rapsody – the latter finishing her impassioned verse with, ‘Fight for Breonna and the pain of her mamma!’ It hits hard. Likewise, it remains a thrill to hear Chuck re-rampaging over Public Enemy No.1’s squelching beat for the newly-rechristened Public Enemy Number Won, which now comes bolstered with spoken word segments from Beastie Boys’ Ad-Rock and Mike D, plus rhymes from Run-DMC. It’s not so much a walk down memory lane as it is a triumphant stomp.

Elsewhere, a reunion of sorts transpires on GRID as Public Enemy unite with Cypress Hill for a makeshift Prophets Of Rage session, albeit exchanging Rage Against The Machine’s musical spine for a psychedelic funk jam conjured up by George Clinton. For those missing POR, there is the sound of Chuck getting busy over frazzled guitar lines on Yesterday Man and Smash The Crowd. Yes, such instances fall short of, say, the pummelling heft of PE’s classic Slayer-sampling She Watch Channel Zero?!, but there is a compelling rawness to them. If it’s energy you desire, Go At It is the track to jump straight to: a mutating hip-hop/rock crossover that Chuck matches with an imperious delivery.

Perhaps what’s most impressive of all, however, is that for all the invective and righteous indignation on display, the personal is not a casualty of the political here. In fact, the two best tracks also happen to be two of PE’s most intimate moments to date. Rest In Beats sees Chuck pay his respects not only to late stars like Tupac and Afeni Shakur, Notorious BIG, Eazy E, Lisa Left Eye, Jam Master Jay, but also the loss of the ‘brick and mortar record stores’, ‘dope diverse tours’ and the time when you ‘really had to rhyme’. Continuing the elegiac atmosphere is Flava Flav’s R.I.P Blackat. As ever, throughout the album he accents Chuck D’s assault with excess charisma, but here he pays tribute to a departed friend who saved him back when he was ‘up in the streets of New York secretly digging my grave with the drugs and the thugs’. It’s a poignant thing indeed to hear a man so synonymous with wearing a comically large clock around his neck pondering the passage of time in such a sombre way.

Some will inevitably hold every Public Enemy album up against their ironclad classics like Fear Of A Black Planet and It Takes A Nation Of Millions, but to compare What You Gonna Do… to these untoppable milestones is to miss the point. What matters is that PE are not only still going after all this time, but still making music that matters. ‘Can a song save the world, in this time of 45?’ Chuck ponders at one point on Toxic, another dumping-on-Trump track. Well, a collection of songs like this can’t hurt.

For Fans Of: Rage Against The Machine, Run The Jewels, FEVER 333

What You Gonna Do When The Grid Goes Down? is released on September 25 via Def Jam.

READ THIS: The 20 greatest Rage Against The Machine songs – ranked

10 lesser known Korn songs that everyone needs to hear

Korn are no strangers to rarities and B-sides, lending their names to various projects over the years. Here are just 10 of their greatest unknown hits that probably passed you by…

Chuck D: “Changing society with culture is a big task, especially if culture is leaning in a different way"

An audience with Public Enemy's Chuck D, discussing his new album, American politics, growing up, and why we'll never hear the best Prophets Of Rage song...

The track is taken from Public Enemy's new album, What You Gonna Do When The Grid Goes Down.