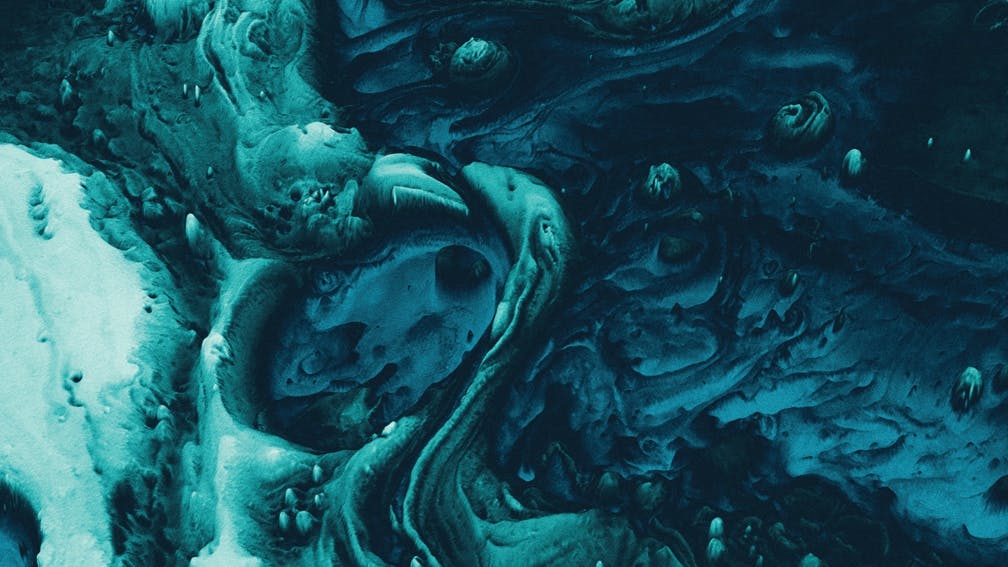 Those who spend their nights chasing ghosts through dark corridors believe that a handheld radio device, a ‘spirit box’, can relay actual voices from the ‘other side’. The Canadian band of the same name are similarly reliant on switching frequencies, but these explosions of sound owe their volume to life, not death.

A string of videos, extraordinary in both visuals and sound, prompted many millions of streams. With Spiritbox unable to play live due to lockdown, curiosity was further piqued, turning to obsession. Thankfully, Eternal Blue doesn’t disappoint – in fact, it’s the debut of the year.

Emotive and challenging, and fronted by the remarkable Courtney LaPlante, its thrust is just familiar enough to steer you between its creative peaks. There are grey-tinged electronics that build gradually through ever enlarging folds of sound. At the climax of opener Sun Killer, that levee breaks and you’re consumed by waves that purge as much as they crush. The lyrics tend to document the singer’s battle with depression – ‘I was born to break’ are, ominously, her first words. ‘I have learned to love the embrace in this mutually assured destruction,’ she roars in Hurt You, after Mike Stringer’s alarm call of a guitar intro unleashes a spectacular harsh-to-melodic masterpiece.

You might also wanna learn Yellowjacket’s hook line ‘Where was the grace when I was asking for it?’ because you’re going to be singing that soon. Architects’ Sam Carter steps up to deliver one of the most cathartic choruses from any band in recent memory. When this is performed live, even without Sam, it’ll be one of those moments where time blurs and the entire room dissolves into a beautiful chaos of shared emotions.

Then there’s the pairing of Silk In The Strings and Holy Roller, which showcase Spiritbox at their most brutal. It’s not just Courtney’s incendiary vocal delivery, but the combination of Mike’s guitar and electronics that widen the scope and drama. Despite Holy Roller’s video (inspired by cult horror Midsommar) having been around since last July, its mechanical-to-human rage remains undiminished, a thunder of self-renewing shockwaves. Make no mistake – you’re just a particle now, and Spiritbox are the Hadron Collider.

Elsewhere, on Secret Garden and The Summit, dreamlike soundscapes evolve into sky-seeking feeling-drenched vocals, while the title track angles for clarity as Courtney bids to silence the black dog. Introduce thrilling stabs of heavy and Mike’s melancholy solo, and the singer’s plea to make ‘my blood slow down’ is complete. Constance, which closes the album, remains an uneasy stand-out built on shifting musical sands. Reflecting the creeping horror of its subject matter, dementia, it climaxes in lurching, grungy confusion, like an unfamiliar world opening up at the precise moment we thought we had our bearings.

This is the thing with Spiritbox: they spin you around. Eternal Blue is dizzying, cleansing and frightening. You need to delve deep to find your place within it, but that journey is the very thing that makes this album so interesting. It’s an entrance that brings darkness and beauty in shades of heavy that you haven’t quite encountered before. So humane and startling is its message that it clearly hasn’t come from the ‘other side’, but from the one we’re all about to join.

For fans of: Deftones, Gojira, In This Moment

Eternal Blue is released on September 17 via Rise.