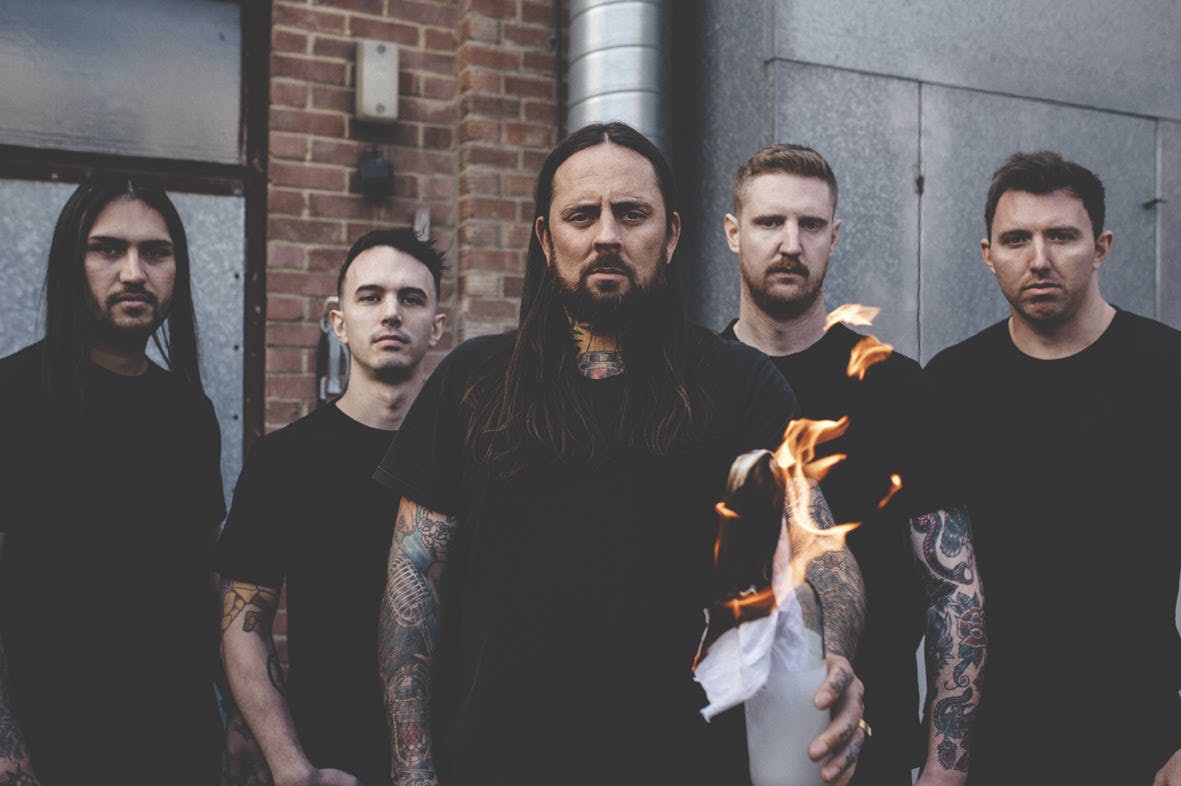 There is something genuinely unpleasant about Thy Art Is Murder. The Sydney deathcore quintet’s music is an unrelenting, tireless attrition of brutality and aggro, a migraine of sound, almost produced not to make the heaviness sound sonically weighty, but for maximum abrasion – to make it all tickle parts of the ear and the brain not usually touched by music and scratch meathooks down them. And there seems to be no levity or relief in unity with it, either; everything is mired in a negativity that, rather than being something to overcome, is instead spat upon repeatedly with a knowledge that things aren’t going to be getting much better and there’s no point saying otherwise. And as with the similarly minded Nails, Full Of Hell or All Pigs Must Die, there isn’t a shred of banter or shared, in-it-together spirit to be found. Instead it exists as a stony-faced exercise in chasing a catharsis that is hard to come by and, when it does arrive, will not be lasting long before the red mist descends again.

Human Target does not buck this single-minded, visceral trend. If anything, here Thy Art Is Murder have doubled down on their unsmiling, fists-first approach. It is the dark, bitter sound of undiluted hatred, stress, frustration, violence, depression, anger, hopelessness and fear, played with almost nothing in the way of gear-changes or subtlety. And as the unfettered rage that surges through Eternal Suffering, Voyeurs Into Death or New Gods hits you like a vinegar enema, you think one thing about all of this: good. Because when it comes to this stuff, few are capable of doing it with such devastating, impactful expertise as this.

Everything here is pumped up to maximum aggression. Even the occasional flashes of electronic melody, or the picked guitar intro to Eye For An Eye, are loaded with menace, like smashed glass waiting for a bare foot. Throughout, singer CJ McMahon is nothing but pissed off, to an almost unnecessary degree. But then, with titles such as Death Squad Anthem, Eternal Suffering and Make America Hate Again, you neither need nor want anything different.

There is a surprising element of intelligence behind the barrage, though; a human context which adds a necessary spark to proceedings to make it feel like you’re not simply at the mercy of some piece of endlessly angry deathcore machinery. The title-track deals with the subject of organ harvesting and the way it reduces human beings down to simple commodities consisting of parts that can be bought and sold. Make America Hate Again, meanwhile, is actually far more balanced than its so-obvious-it-goes-beyond-naff-and-becomes-good-again title, observing the way the tactics of both left and right sides of the political spectrum in the last U.S. election ended up leading to a lack of proper debate or informed choice.

Ultimately, you will only really take one thing away from Human Target, but this is absolutely fine. This is not a band to whom one should look when seeking an answer, merely an arena in which to let off about the question. It’s this band’s understanding of this, rather than a desire to be your mate, or pretend that they can change the world, that makes them such an effective dirty bomb of weaponised brutality. And, sometimes, such an unambiguous smack in the mouth is actually just the job.

For more Thy Art Is Murder, check out the band recording vocals with mega-producer Will Putney in our new video series, Art of the Record:

Thy Art Is Murder

Thy Art Is Murder release video for Human Target, the title track from their upcoming album