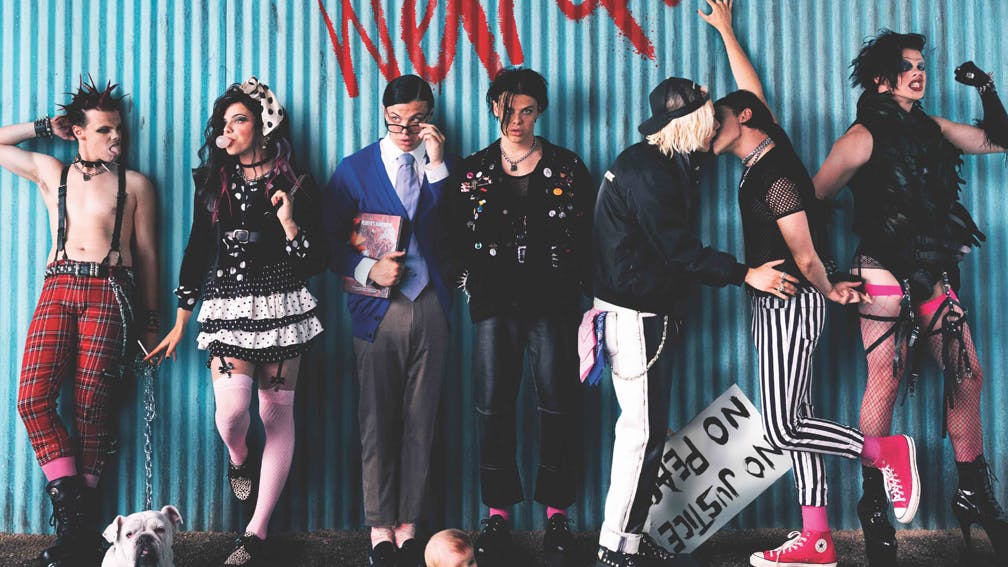 It says much about both Dominic Harrison's inability to sit still and his overwhelming desire to succeed that, even in a year in which bands have spoken about their album releases feeling like a non-event rather than a jumping-off point for their next chapters, his presence as YUNGBLUD has at times felt almost omni. And everything he's done has been big, loud and colourful. He was a giant robot in the video for his guest spot on Bring Me The Horizon's Obey. He's just teamed up with alt.rap superstar Machine Gun Kelly. Every video he's dropped - cotton candy, strawberry lipstick - has gone massive and felt notably at odds with the iron grey misery into which they've been released, while his dedication to creating a community with his fans - his family, as he calls them - has probably taken up almost as much of his time as actually going on tour. 'Fuck all of the oppression and the self-doubt,' he sings on strawberry lipstick, a line that sums up how he makes music as well as how he thinks.

On Weird!, this philosophy is written as large as a skyscraper across a clutch of songs and sounds that take in pop-punk, nu-metal, a little hip-hop and, frankly, cartoon music. There are moments when he reins it it a bit, on the plaintive strum of love song and the reflective Quiet In Beverley Hills, but these are notable exceptions. cotton candy is a pop-based bop, while super dead friends bleeps and bloops with club dancefloor thrust. Meanwhile, teresa tips its hat to All Time Low, with its big, sugary chorus, while ice cream man even brings to mind later Green Day.

Throughout, the contrast is up full. Even the occasionally dark topics on which he touches come out with a tint to them, where colouring over the lines has added his own touch even to the feelings of isolation or identity confusion. And this is where Weird! trips over itself. Admirably, YUNGBLUD says, "I hope it makes people feel like it's okay to feel out of place or twisted or weird, because life is weird-but that's what beautiful about it." But this doesn't always quite marshal itself into songs that are as inspiring and hopeful, or, indeed, quite as good, as you'd wish. The day-glo cutesiness eventually feels like eating an entire birthday cake to yourself and washing it down with three litres of Coke. This is, obviously, some of the point, but for all but those with the sweetest tooth, Weird! is a collection of good moments disappointingly hidden under an avalanche of sugar.

For Fans Of: Bring Me The Horizon, All Time Low, Waterparks

Weird! is out now via Locomotion/Polydor.

READ THIS: Why YUNGBLUD is more than music, it's a community

YUNGBLUD hit The Late Late Show with James Corden last night (March 28) to perform recent single The Funeral, and give an update about the release of his third album.