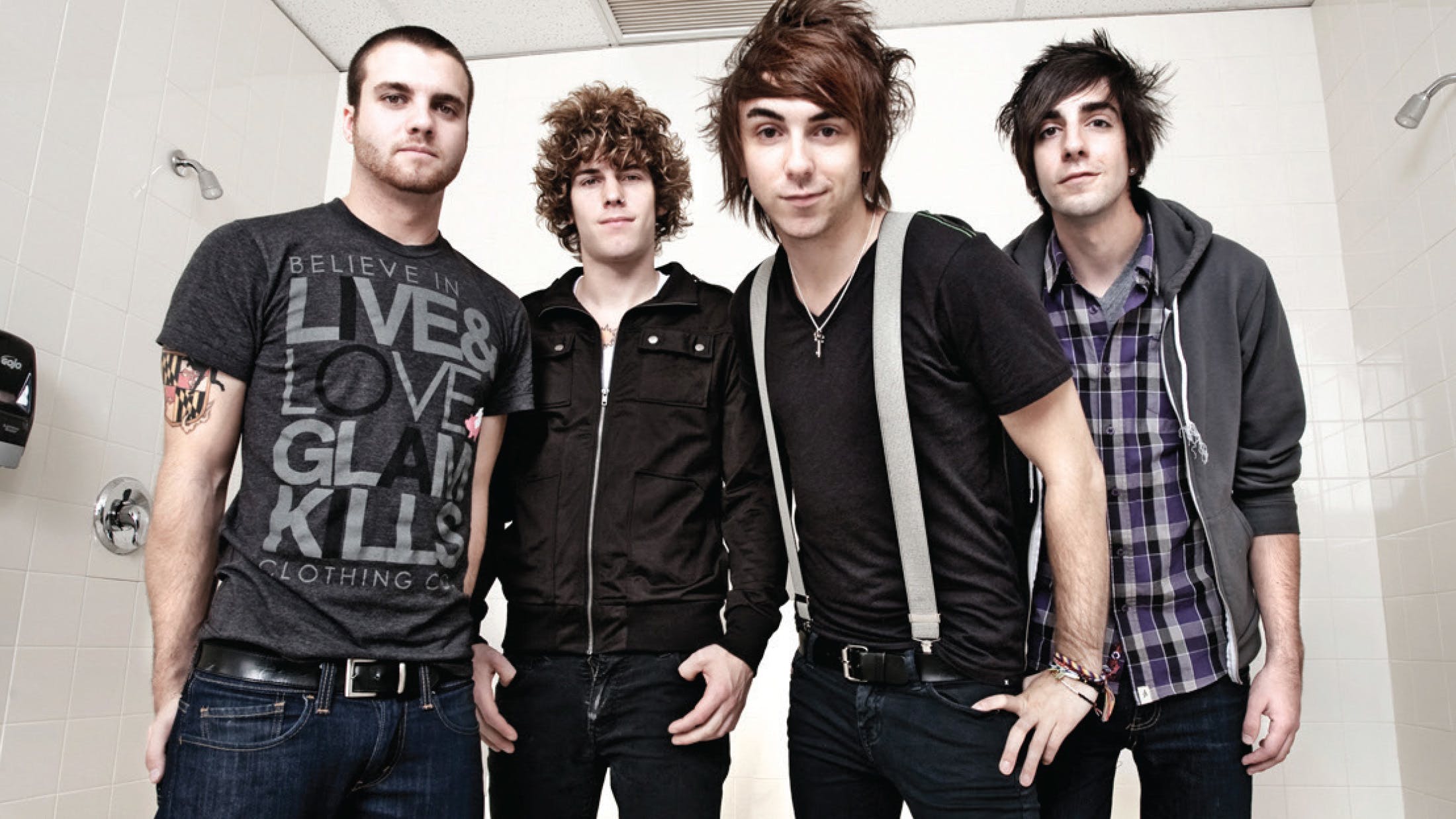 Pop-punk heavyweights All Time Low have announced they’ll be celebrating the 10-year anniversary of their much-loved album Nothing Personal with the release of a brand new re-recording of the record. It’s Still Nothing Personal: A Ten Year Tribute will be released on November 8, featuring a new version of every song on their classic 2009 LP.

Alongside the music, the band have produced a documentary that charts the entire recording process and features in-depth interviews with all four band members, as well as input from the producers that worked on Nothing Personal. In addition, the Maryland natives have announced a set of anthology shows to commemorate the occasion, with concerts in Los Angeles, Chicago and New Jersey taking place across eight dates in December.

Nothing Personal was the band’s third album, and helped launch them on a career trajectory that’s seen them grow into a giant of contemporary rock. In the decade since its release the band have headlined festivals, played arenas around the world, and even topped the UK album charts in 2015 with their sixth LP, Future Hearts.

It was the infectious songs from Nothing Personal like Weightless and Lost In Stereo that set All Time Low on that path to stardom, though. Here, frontman Alex Gaskarth fills Kerrang! in on the anniversary celebrations, teasing what fans can expect from the new release, and reflects on the legacy of an album that changed their lives…

Have you been plotting this anniversary release of Nothing Personal for a long time, Alex?
“Yeah – we’ve always known we wanted to do something special to celebrate this album, and make it something that went beyond anthology shows. We did 10-year anniversary concerts for [2007 album] So Wrong, It’s Right, so we wanted to go a step further for Nothing Personal. In the end, we came up with the idea of doing a documentary, so we sat down and spoke about the album in great depth, and got the producers of the record involved, too. It was fun diving back into the Nothing Personal world and taking a walk down memory lane.”

Did it feel strange for you to be subjects of a documentary?
“No, because we all love talking about ourselves! (Laughs) It was a bit surreal, sure, but we’re not doing this for us. As cheesy as it may sound, we’ve done this as a thank you to all the people who have supported us over the past 10 years. Above all else, this is for the fans.”

What was it like having a camera crew film you while you recorded?
“It was very odd to have those cameras in our faces! It takes you out of the moment because you’re trying not to break the fourth wall, and it kind of feels like being in a zoo, only it’s one where thousands of people are going to watch you from the comfort of their homes! We tried our absolute best to not let it affect us, but it’s a vulnerable situation to be in when you’re trying to play every note perfectly. We’ve been filmed playing before, so it wasn’t quite a baptism of fire, but it was definitely a different experience for us. I’m glad we did it, though – it was super fun to be back at Red Bull Studios, which is where we originally recorded the bulk of Nothing Personal. It was nice to revisit those memories.”

Did you alter or reimagine any of the Nothing Personal songs while you were in the studio?
“We talked a lot about whether we should totally rearrange the songs and approach them from a fresh angle, but we’re quite precious about those tracks, and we know we’re only going to be doing a handful of Nothing Personal shows in a select few places, so we decided it’d be best to recreate that live experience as authentically as possible for those who can’t be there. Consequently, we stayed pretty true to the original versions when we were in the studio, but we did change a few parts along the way and make some improvements. I didn’t go in and rewrite the lyrics to Therapy or anything like that, though!”

Which was your favourite song to revisit?
“I really liked doing Walls – it stood out to me as one that was really fun to sing, and it’s got a cool energy to it. There’s plenty of emotion in that song, and the chorus really allows you to belt some notes. I’m eager to play that one live – I think it’ll provoke one hell of a sing-along.”

As well as the special edition of the album, you’ve announced some Nothing Personal shows for December in the U.S. What’s the plan for those?
“We’ll be playing Nothing Personal front-to-back, which will be cool because there are some songs on that record that we’ve never played live, like Walls. It’ll be interesting to see the audience’s reaction to hearing those songs live for the first time. The shows will be great moments to share with our fans, and we’ll be playing a full set alongside the anniversary material. The ferocity with which people attacked these tickets the minute they went on sale was mind-blowing to us – I believe the shows were sold out within hours – so if that’s any indication of the fanbase’s excitement, I’m pretty sure these gigs are going to be insane.”

Which of the Nothing Personal songs that you’ve not played live a lot previously are you looking forward to performing?
“I’ve always loved Sick Little Games. We played it for a tour or two a few years ago, but then it fell back into the shadows. I really like anything that I got to work with Butch Walker on – he recorded Damned If I Do Ya (Damned If I Don’t) with us as well, but that’s been a set staple of ours since it came out. Rocking Sick Little Games is something I’m excited about.”

READ THIS: We Are Not A Cult: Remembering the war on emo

Has it been a challenge to relearn some of these older songs?
“We’ve had to work at it, yeah, but it’s been a cool process. It’s crazy how that muscle memory can still be there a decade on – some of these songs exist within us like we wrote them yesterday. It was kind of spooky being able to pick some of them up again so easily.”

Ten years on, which song from Nothing Personal stands out as the best, in your humble opinion?
“Weightless, hands down. Calling it ‘timeless’ might be a stretch, but it’s a song that’s totally synonymous with our band, in the same way that Dear Maria, Count Me In is. Weightless has really stood the test of time, and it speaks to what All Time Low has always been about; it’s a banging rock song, and that’s what we love writing. It’s a career-defining track for us.”

How far did the initial success of Nothing Personal surpass your expectations at the time?
“Thinking back, we were insanely excited during that period. Coming off the back of So Wrong, It’s Right, it felt like things were growing for the band and like we were connecting with more people. We were champing at the bit to keep going, despite there being more pressure around us and the term ‘sophomore slump’ being thrown around somewhat. Not delivering was something we were fearful of, but we wanted to put a new spin on All Time Low and really push the envelope and show what we could do. We were young and not that self-aware, and all we wanted was to make music. We were very driven in that regard. Writing a record and getting out on tour was the aim for us, but the way things snowballed totally blew us away.”

You worked with several different producers on Nothing Personal, something that not many rock bands were doing at the time. Looking back, what was that process like, and what kind of impact did it have on the finished product?
“It’s interesting, because that was never really the plan – the intention was to just work with one producer. But then we hit our stride in terms of writing and it became apparent to us that different producers could bring different things to the table. In the end we thought, ‘Let’s just go for it and do things the way they do in the worlds of pop and hip-hop.’ There weren’t a whole lot of bands allocating work like that at the time. The Matches were one band that were working that way – that’s how they made [2006 album] Decomposer – but they were one of our few contemporaries that were willing to do that. We took inspiration from those guys, and it meant we ended up with a record that had ideas from a variety of different musical worlds. To be honest, listening back to Nothing Personal, I do feel like it lacks a little focus at times and feels a bit all over the place, but that speaks to where we were as artists back then. That album was us figuring out what All Time Low was, what we should sound like, and how to not just write fast, four-chord rock songs. Nothing Personal was us branching out and doing different things for the first time, like adding electronic beats, programming and a ballad – all elements that had previously been missing from our music. The whole process really allowed us to explore our sound.”

Finally, how important do you feel the release of Nothing Personal has been to All Time Low’s success, and what legacy do you believe it’s left?
“Nothing Personal really solidified us as a band and ensured we could have a career. It took us from being a ‘buzz’ act in the Warped Tour scene with a bit of hype behind us, and turned us into a breakout band that was able to tour the world. The release of that album led to multiple festival offers and the prospect that we might some day play arenas. Before then, that kind of stuff was merely a pipe dream for us. Nothing Personal really set us up for where we are now. On So Wrong, It’s Right, we were still trying to find our feet as a band and establish who we were, whereas with Nothing Personal, we burst out of the gates and into a full sprint, and we never looked back.”

It's Still Nothing Personal: A Ten Year Tribute is set for release on November 8 via Fueled By Ramen.