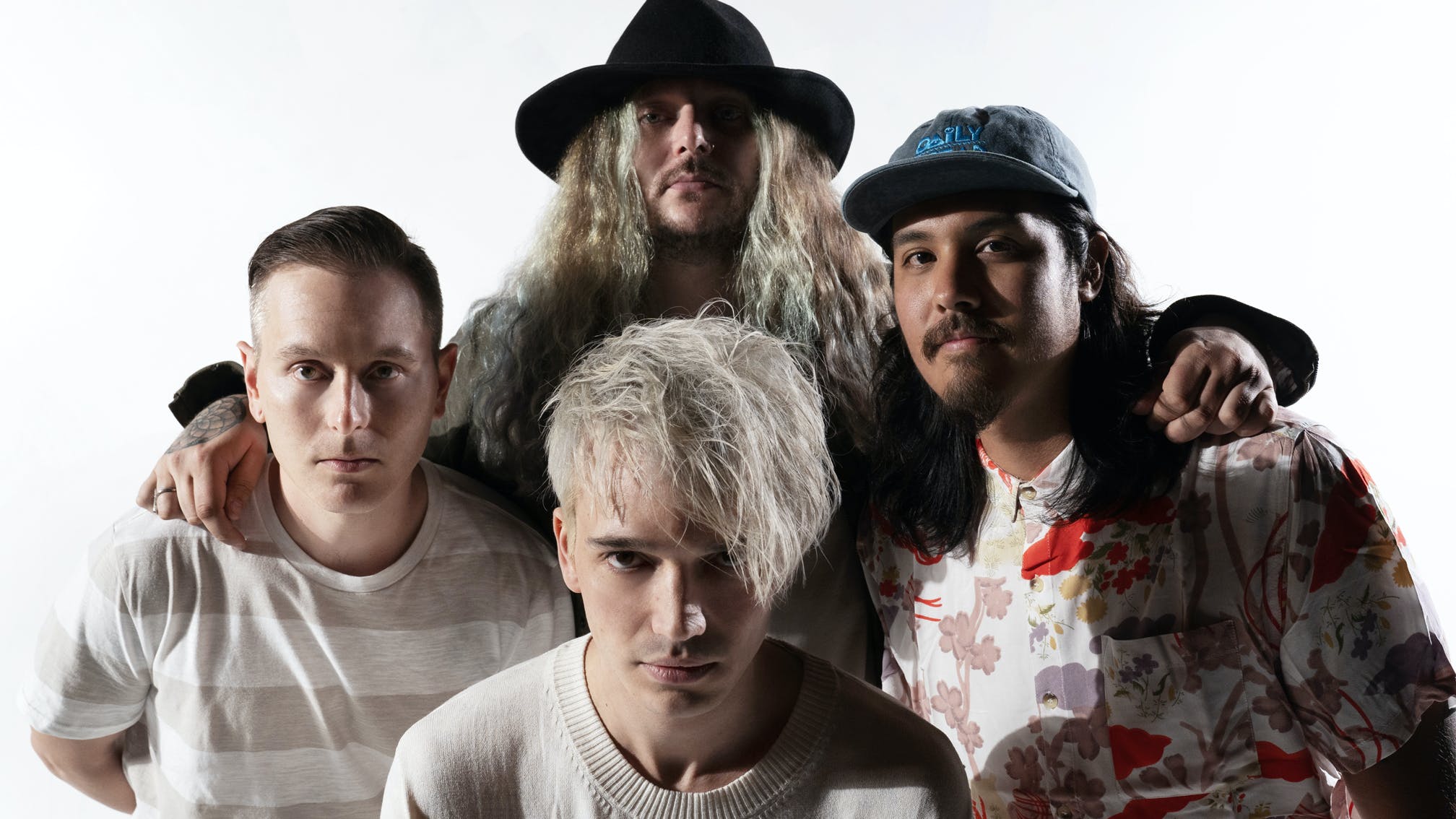 Nashville noisemakers Badflower know they’re not for everyone. On the surface, the fiery foursome make bold, brash rock, with a backbone of booming drums and scuzzy guitars, but vocalist Josh Katz describes their music as "not easy listening… it’s actually difficult listening".

“If you're up for that sort of thing, to be challenged in some way, then it's your thing,” he smiles. But with gold-certified single Ghost and a belting performance at this year’s Reading & Leeds fests, it’s clear Badflower’s off-kilter rock’n’roll has found an audience willing to face the challenge.

Josh can’t remember how or when he started making music, he’s just stuck with it for what feels like his entire life, playing piano from an early age. He met Badflower guitarist Joey Morrow while attending music school in Hollywood, before they both dropped out and turned the bedrooms in their apartment into a recording studio. “We had no direction or vision,” Josh remembers. “We just slept out in the living room on bunk beds that we built and made music every single day. That's all we did and it turned into this.”

The band were later rounded out by bassist Alex Espiritu and drummer Anthony Sonetti. Despite the hordes now following them – their video for Family has over one million plays on YouTube – Badflower initially found it difficult to find a community.

“We didn't know anything about the rock scene. We didn't even know it really existed because being in California, they don't play rock anymore. It's not a thing,” says Josh. Oddly, they eventually started getting recognition from the pop world, including former *NSYNC member Lance Bass, who featured them on his satellite radio show.

Two years ago, they released debut album OK, I’M SICK, and the aforementioned Ghost also won them an iHeartRadio Award for Rock Song Of The Year. “It's very cool. I hope it keeps happening. But I also have to make sure to not let that sort of thing motivate me,” says Josh, who tries to keep himself grounded, reminding himself that, at the end of the day, he currently lives in a barn.

“No matter how many GRAMMYs and platinum records we may win, as long as I'm on this futon in a barn covered in dirt, I think I'm good,” he laughs.

It was in his dusty wooden home where Badflower worked on their new album, This Is How The World Ends, which captures life at this current moment, in all its chaos and absurdity.

“The world seems more unclear and confusing,” Josh says. “This album to me reflects that perfectly. It's more commentary on everything happening around me – the things that I'm observing and the types of people that I'm observing – than it is some kind of preachy solution to all these problems we're having. I don't know the answer. I just know that this is how this feels to me.”

Examining the world in 2021, Badflower use their new LP to pinpoint specific social issues close to their hearts. Machine Gun talks about war, while the haunting Tethered discusses sexual assault, and My Funeral deals with mental health. For the satirical track Stalker, which is told from the perspective of an incel, Josh ended up falling down a “scary but also really eye-opening” rabbit hole of research. Songs such as this tie into the thread of social media and internet culture weaving through this record, with Josh’s direct, conversational lyrics being influenced by "the language of this century".

“I couldn't be inspired by anything else,” he explains. “There was a pandemic, I couldn't hang out with real people. So I was just like everyone else typing on the internet like, ‘We're really tense now. We're really debating.’”

The singer's reluctance to get involved in those types of heated arguments also fed back into the album. In fact, the realisation that he doesn’t have to have a fully-formulated stance on every single topic is what informed dramatic track Everyone’s An Asshole. As careful as he is about what he writes, Josh acknowledges that opinions can change.

“I'm finally at the point where I can recognise that I don't have to be preaching all the fucking time. I don't have to have an opinion about everything, even though it seems like everyone's forcing me to," he says. "[That song is] just calling out the way in which everybody has an opinion and everybody's tense and on edge and mean because of it.

“Mostly my hot take is: you're mean, stop being so mean,” Josh adds with a chuckle.

But many of the tracks, like Family, are more personal. Even some of the more character-driven songs, such as the catchy Fukboi and laid-back Johnny Wants To Fight, were inspired by people Josh knew.

“I really wanted to sing about the people from my late teens and early 20s,” he says. “I don't know why I was so inspired to do that. But there were two songs immediately that came from that time period of my life where I was just drinking and being reckless, and [hanging with my] bros of Southern California.”

Josh moved from Los Angeles to Nashville in the middle of writing the record: “My farewell to the place is writing these songs about all the shittiness in that city, or at least the shitty types of people," he admits.

For a band that initially struggled with plugging into the rock scene, Badflower now find themselves in good company. Their music video for gripping Don’t Hate Me features a few familiar faces too, including grandson, Awsten Knight of Waterparks and Ice Nine Kills’ Spencer Charnas. Josh reached out to them and other musicians via Instagram DMs. “I wanted the whole place filled up with only other artists,” he reveals. “I thought that would have been so fun. But [with] scheduling and COVID and everything, it was actually very, very difficult.”

Josh confesses himself that he tends to bite off more than he can chew – whether it was in the process of making this album or getting ready for their current tour, where he’s in charge of the lighting designs. “I haven't even learned all the words for the songs, but I don't have time to figure that out because I have to make sure that our band isn't playing in pitch-black darkness,” he jokes.

But is all this work worth it? What is the end goal? For the album, it’s simple.

“I hope it makes [listeners] think,” he says. “If there's anything that we want to inspire people to change, it's just being more empathetic.”

Badflower have announced a UK and European tour

Listen to Badflower's brilliantly boisterous new single Fukboi, taken from next month's This Is How The World Ends LP.

Badflower announce new album, This Is How The World Ends

California quartet Badflower have shared emotionally gripping new single Family from their upcoming second record This Is How The World Ends.