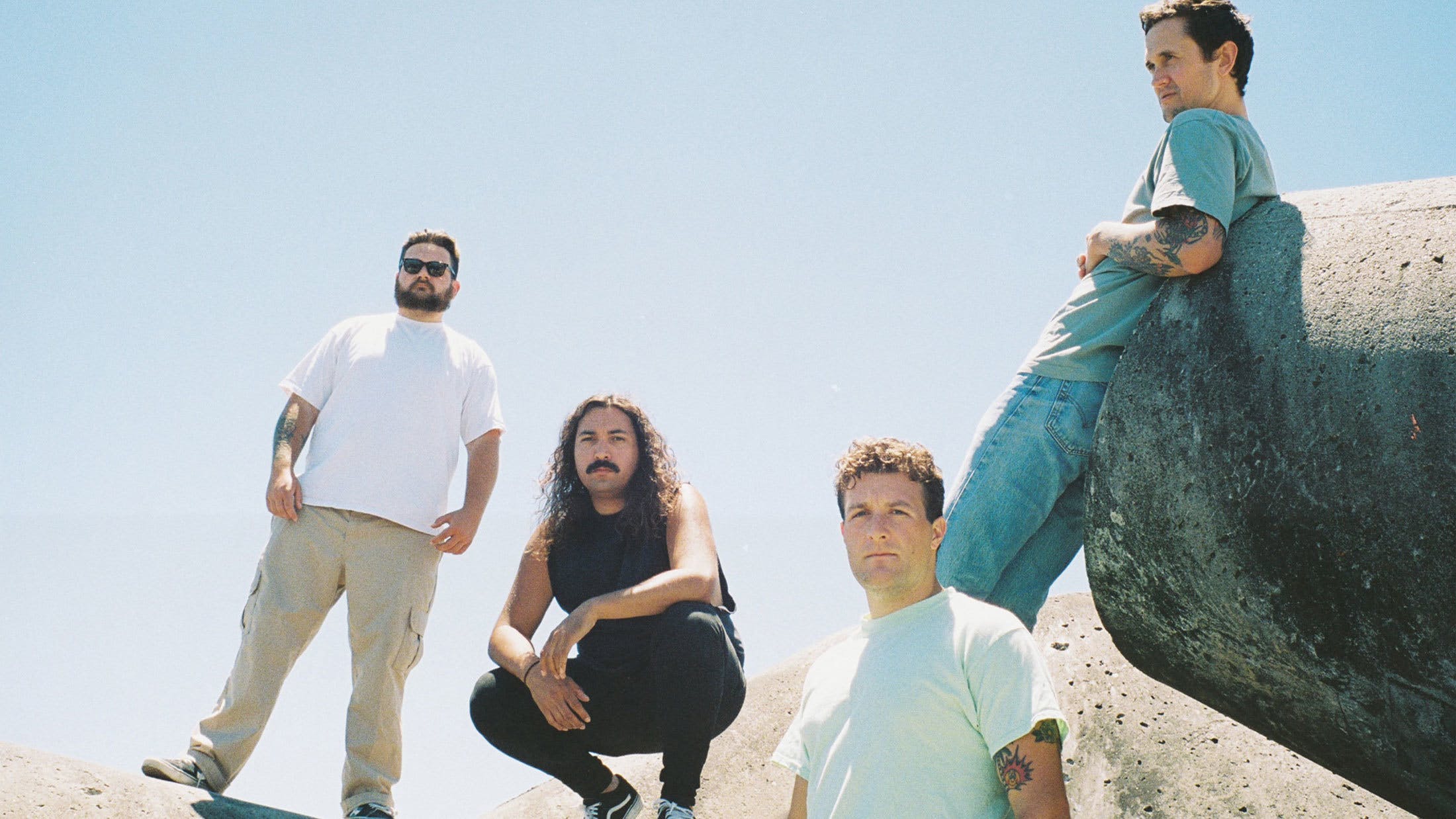 Sammy Ciaramitaro is a recognisable dude. He’s big, almost outsized, and he looks like he was born wearing shorts, tube socks and Vans, with a face that’s 40 per cent grin beneath a tan and a shock of curls. It takes that sort of stature to stand out when all hell is about to break loose on a stage that’s packed with bodies. Even in a video shot from rows back and off to one side, he is still the centre of attention. He bounces back and forth, barking commands, stoking the fire, while enmeshed on all sides by people – they’re in front of the riser, on it, and flashbulbs spill out past the speakers. “Let’s go fucking buck wild, it’s been a whole year,” he yells before Drain launch into Army Of One, and everyone goes fucking buck wild.

In the summer of 2021, any chaos was generally the bad kind – the kind that made an already difficult situation even tougher to navigate. That’s why the videos emerging on social media from the now legendary Real Bay Shit show were so exciting, and frightening, to people who’d spent the preceding 12 months getting to know the same four walls a whole lot better. As pixellated frames showed fireworks bursting overhead and punishing pits rolling across a San Jose parking lot, hardcore fans worldwide were given a brief taste of what they’d been missing.

But forget all that stuff for a minute: let’s talk logistics. Along with Drain, San Jose bruisers Gulch, Sunami and Maya Over Eyes were on the guerrilla bill, plus Santa Cruz’s Scowl, and Xibalba, who’d made the trip up the coast from Los Angeles. Sammy and Cole Kakimoto, his bandmate in Gulch, printed merch at Cole’s shop Print Head. The stage was built by Gulch vocalist Elliot Morrow, a carpenter by trade. The lot was loaned by a friend. It was $5 to get in. Two-thousand people showed up. DIY attitude, meet the wild excitement behind Bay Area hardcore.

“Shows have always been popping around here,” Sammy explains while taking a walk, stopping from time to time when his dog gets too riled up by passing surfers. “It's a very tribal, old-school scene. Everyone in San Jose absolutely rides for San Jose, they love each other and they all put on for each other so hard. I feel like that, combined with the fact we have a spotlight on us, we have resources, we have skills, which meant we could do things our own way. That show was the first back after COVID – or not really after it, to be honest, kind of in the middle of it, we may have jumped the gun – and it was a turning point for us.

“Collectively, with like eight heads, we put together this 2,000-person show. No promoters. No big business guys. Just us on our little social medias sharing a flyer. We had no advertising or anything weird like that. That was the moment when we realised we could do this ourselves, that we don't need anybody else. We have more fun this way. We do it better.”

It’s all the more remarkable given how easily Drain’s rise might have been put into a skid by COVID. They released their debut album California Cursed on April 10, 2020 and their tour plans were wiped from the board pretty much right away. Even removed from its natural environment, though, the record spat, snarled and windmilled its way into plenty of hearts.

Riding rougshod over the line separating hardcore from crossover thrash, it mainlined gnarly, serrated riffage and Sammy's none-more-snotty yell, which tore through words examining ideas of self-worth, the often numbing grind required to facilitate creativity, and the disconnect felt by being priced out of a place you love by tech bros with deep pockets and shallow wants.

“I mean all this with the most respect to a lot of my friends, and even other projects I'm a part of, but Drain is very real. It's very authentic,” Sammy says. “I'm not going to front. I grew up an upper middle class white boy. I didn't come from the streets. Right now, it's cool to be a street kid, to be a gang-affiliated kid. I think a lot of kids want to come off like they are, but they're not, and they never have been. That's the difference. Lyrically, the things I write about are things I can personally attest to.

“A lot of the kids who come to the shows are kids just like me. I'm not a super deep, poetic lyricist. I use real words that I'd use in a regular conversation. In that sense it's very down to earth. As the band's getting bigger, I'm trying to keep that feeling alive. Every show, we pull up to the venue, I set up the merch and I run merch pretty much the whole night. I want to be the face everyone says hello to. I don't want it to be somebody else. That doesn't feel real. I want to thank every single kid that comes out for being there.”

Some of this attitude has probably been passed along the line by young Sammy to present day Sammy. He grew up in Los Angeles, listening to gateway staples like The Offspring and going to house shows by crust-punk and metal bands without really knowing the difference. All he knew was that he didn’t have a studded jacket or bleached hair or a mohawk. “I was connected with a disconnect,” he says. "I'm scared of everything. I'm not into demons and devils. I'm not an anarcho-punk dude. I'm not smashing the system. I live with my parents in a little suburban house.”

Hardcore, however, was different. Suddenly Sammy felt like he could see himself up there, telling his own story. Intriguingly, Drain are on the cusp of being able to provide that sort of entry point on a massive scale. Almost right after California Cursed was issued by the legendary hardcore label Revelation, word came through that Epitaph, a punk label with a rep like no other, were talking about the band. “Our manager reached out to us like, 'Hey, Epitaph expressed some interest.' We were shocked. But, also, what does that mean?” Sammy says.

“Maybe they mentioned they liked us, but they don't like us like that, enough to want to put us on their label. Then it was a slow burn thing. Over the next six-to-eight months, it became clear they were actually interested. A big thing for us was that we didn't necessarily want to move on and start writing another record. We worked so hard on California Cursed. We did want to give it a proper touring cycle. We wanted to give the songs the love they deserve. Epitaph was super, super cool about that.”

Drain have since taken those songs across the U.S. three or four times, and their eyes are now firmly fixed on a spot in the distance. Their signing to Epitaph last summer brought with it a new song, Watch You Burn, which kicked on from California Cursed by doubling down on what worked and delivering it with bone-deep swagger. They have a new album written and, no surprises here, Sammy is stoked.

“​​Dude, I feel great about it,” he smiles. “We slowly started working on it, kept chipping away and all of a sudden we were kinda done. I didn't realise. We just did this tour, and prior to that we were so locked into the new album that when we had to get ready it almost felt like, ‘Damn, I wish we were playing these new songs, because these are way cooler.’ I think this is a good situation.”

It’s hard to disagree with that. Let’s fucking go.

Santa Cruz bruisers DRAIN have signed to Epitaph and dropped their first single on the label: Watch You Burn.