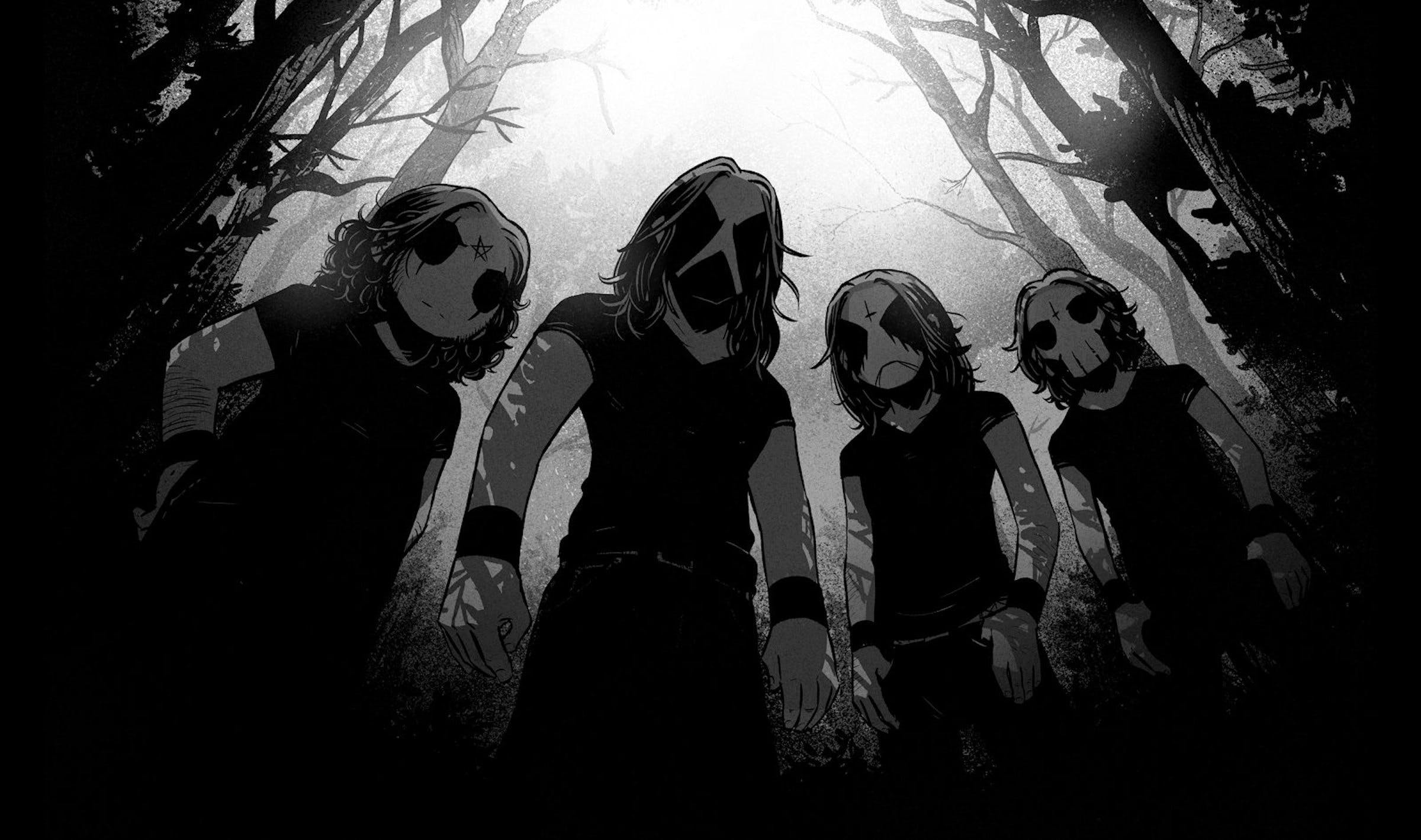 For some, calling black metal “cartoonish” would be an insult, but for Belzebubs it’s just par for the course. The band at the center of the hit webcomic may be shrouded in grimness and mystery, but they’re also surprisingly normal people who deal with the same things every metalhead does -- keeping your band together, balancing work and family, finding creepy-looking places to shoot music videos, and occasionally having to beat abyssal creatures back into the portal from which they emerged.

Last year, the Finnish quartet -- made up of guitarist Obesyx, guitarist/vocalist Sløth, bassist/vocalist Hubbath, and new drummer Samaël -- released their first EP titled Blackened Call, featuring equal parts cacophonous black metal and atmospheric ambience. Now, in preparation for the release of their new full-length album Pantheon Of The Nightside Gods, the members of Belzebubs sat down for a rare interview (especially for Sløth, whose wife and two kids take up most of his time) to discuss the work of living, dying, and staying afloat by the sword.

Above: Hubbath and friend reading the latest issue of Kerrang!

Tell me about how the the three founding members met and formed Belzebubs.

Hubbath: Well, Sløth and I are old school buds, actually, so we go way back.

Sløth: Yeah, metal was life, but we didn’t have any band activity for years. I think we mostly sprawled over at my place playing D&D, Sega or just reading comics and novels.

Hubbath: To the bone. Sløth was this timid, scrawny kid that mostly doodled comics and fake album covers for imaginary bands. That eventually ended up catching our original drummer Izkariot’s eye, and he asked if he could join our ”band”. He was a bit older and had cute goth girls swarming all over him, so we what were we to do? Admit that the covers were fake and that there was no group?

Sløth: Hell no. I remember selling a shitload of vinyls, CD’s and comics just to scrape some money to buy my first Ibanez from the pawnshop. The guitar was out of tune for the first six rehearsals or so, and I think Izkariot either played along out of courtesy, or thought we were on to something really interesting...

Sløth: So yeah, this was way back in 2002. The very same autumn we accidentally found Obesyx, who was playing guitar over at BASSCON.

Sløth: We can touch upon that at a later time.

Obesyx: Yeah, long story short, these two lads had snuck inside the event without a proper invitation. I kind of saved their asses, so we became friends and I was later invited onboard the band.

Sløth: We got lucky. Obesyx had fast fingers, knew the licks and had the patience to show us the ropes.

Hubbath: J-just to clarify, he’s not talking about BASSCON anymore.

What bands most inform Belzebubs’ sound?

Obesyx: We all have our own quirks which have influenced our sound and the way our brains tick.

Obesyx: He’s not kidding. And if you add a little Vital Remains, Meshuggah, Sentenced, Wojciech Kilar and Vangelis in there, you’re almost ready to go. I have a rather…varied background, so I’ve done everything from death metal to flamenco, prog to classical music.

The Blackened Call EP has an atmospheric instrumental as its B-side. Is this a new direction for Belzebubs, or have you always planned on incorporating that sound into your music?

Obesyx: Oh, it’s been a part of our DNA since day one, as we’ve always loved dark and brooding orchestral pieces.

Sløth: Our earlier material has been more straightforward, but now that we’ve made friends with the über talented keyboardist and conductor extraordinaire Desibelius, we are certainly moving towards new, uncharted regions. Wait till you hear the full album, it’s quite a trip.

Have you been able to find a new label since the fireworks fiasco?

Obesyx: Yes! It’s funny how things unexpectedly line up, though. We’d been wading knee deep in crap for years, but suddenly we find a new drummer Samaël, get picked up by Century Media, and feel stronger and more mature than ever.

Sløth: True. We didn’t want to waste any more time, so we dissected and rewrote some old demos, worked on a ton of new material and headed over to the Hellhole Studios around October with 11 tracks. Dan Swanö mixed and mastered the upcoming album, Pantheon of the Nightside Gods, which’ll come out April 26th.

Hubbath: We also have a fierce roster of guest talent onboard: Antikrist, ICS Vortex, Mørkrost and Skvllcrat…Skvllcart…Skvll—

Sløth: I swear, you should’ve seen it. The man turned to monochromatic jelly: ”I’m H-H-Hubbard. Meated to please you. I-I mean pleased to meat you! MEET you!”

Obesyx [laughs]: I’m sure you are, Hubby!

Above: Hubbath gets fitted for stage gear.

Sløth, how has being a dad informed the band's music? Was Levi's birth any different from Lilith's, in terms of influencing your sound?

Sløth: Interesting question. I think the lads had a point there earlier: spawning does affect the time and energy you’re able to put into the music. I’ve been a stay-at-home dad and have needed to prioritise my life accordingly, so the band has been on hiatus every now and then. It’s a shame, but then again I’m content where I’m at now. I’ve matured as a human being and there’s more thought behind our material now.

Hubbath: In all honesty, you were a wreck at some point.

Sløth: Yes, when Lilith was still a little lass and Leviathan was teething…The circles around my eyes were so dark I barely needed to put on corpse paint. I think we wrote our slowest, doomish tracks around the time, mainly so that I’d be able to play along.

What has Samaël brought to the band since joining?

Hubbath: Samaël has brought much needed young vitality to the band.

Obesyx: And polyrythms and progressive twists! Samaël is partly responsible for our leap from traditional black metal into new, unexplored territory.

Samaël, this is your first foray into black metal. How has it been? Is being in a band with your girlfriend's dad in any way difficult or awkward?

Samaël: O-ok, you got me! I admit it, I’ve never played in a black metal band before. My roots lie in progressive rock and metal, the likes of Porcupine Tree, Opeth, Tool, Pain of Salvation, you know? B-b-but I’ve felt very welcome and respected in the band, and feel that I’ve always had the chance to throw in my own ideas and mix things up a little.

Sløth, your kids are always summoning eldritch abominations from the pit. Is that a source of inspiration for the band, or a hassle?

Sløth: It’s a fucking pain. It’s sometimes impossible to get any work done in the house, you know. But sometimes, just sometimes Leviathan might come across new texts or occult rites I find inspiring, and it seeps into the composition or lyrics. I guess it works both ways.

If Belzebubs could tour with any band, who would it be? Have you ever reached out to Dethklok?

Sløth: We haven’t, but yeah, why not! There are numerous bands we’d love to tour with. We’d gladly join forces with Emperor, for example, if they’d begin touring more thoroughly again. But I mean Ihsahn, Abbath, Immortal, Myrkur, Behemoth, we’re good to go with any of them.

Belzebubs' full-length docvumentary book is out next month via Top Shelf. Preorder it here.