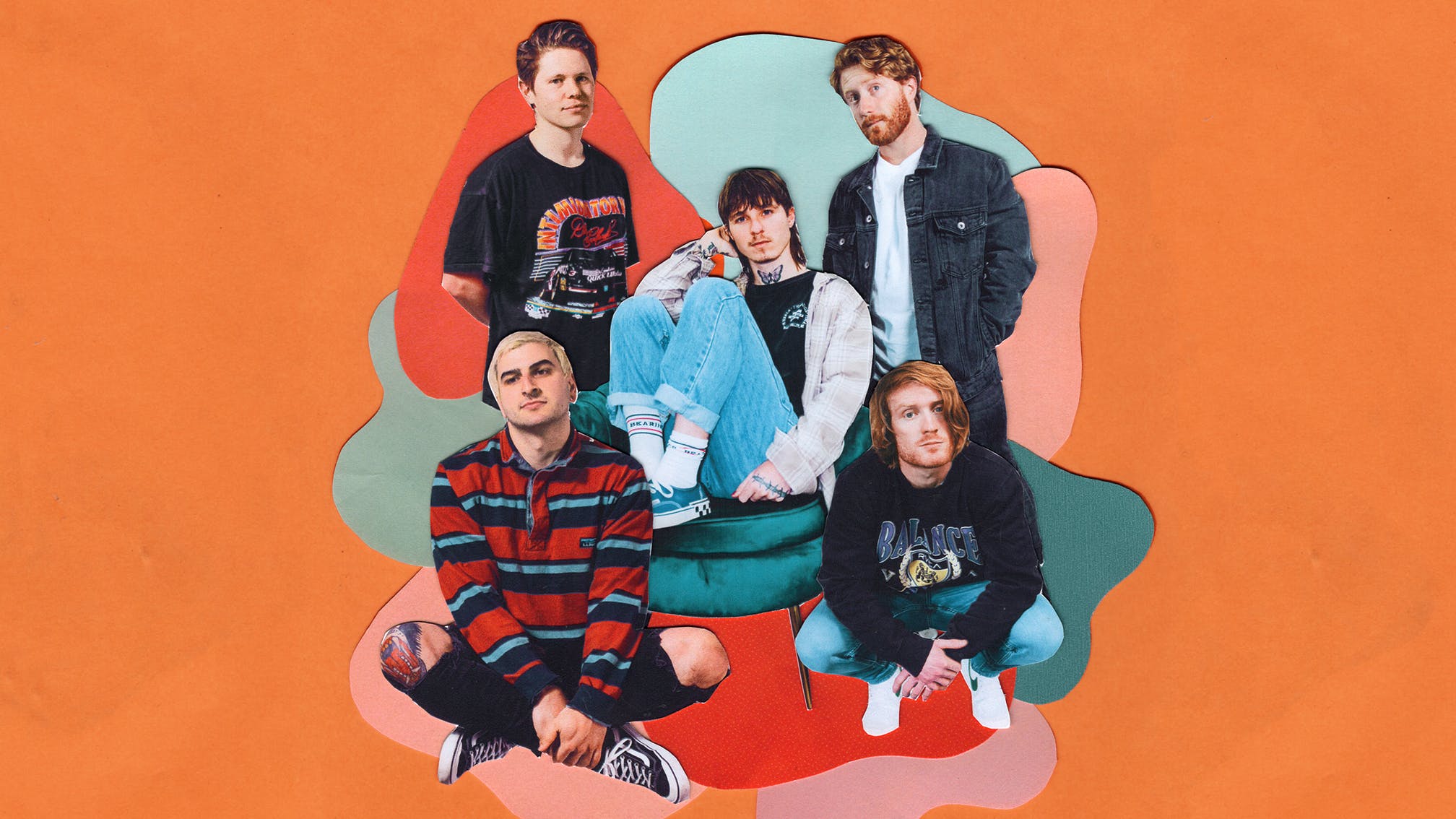 “Everything got cut off so quickly – we started dropping like flies.” Having spent the early part of 2020 touring North America, Aussie pop-punks Between You & Me found themselves stranded in Canada when the COVID-19 pandemic hit. Forced to bail from the recording sessions they had booked in for their second album, the five-piece had to enact a military-style operation in order to get back to Melbourne before the borders closed. It’s a memory that, for frontman Jake Wilson, brings on a hell of a lot of anxiety.

“I’m sorry for how animated I’m about to get,” the vocalist – whose recollection of events is equal-parts jovial and agitated – begins. “States in the U.S. were starting to shut down, so we dropped off the tour we were on in the hope we wouldn’t get stuck somewhere random, and headed for Canada. At first, we were just chilling in our Airbnb and doing last-minute writing for the record, but then COVID spilled over into Canada and our manager was like, ‘We’ve got to get you guys home because soon you might not be able to enter the country.’ The twins [guitarist and drummer Chris and Jamey Bowerman] got flights out, our tour manager got a flight out and I was just left thinking, ‘I guess the record’s gonna have to wait a while!’ It was a wild time in my life that is going to be very hard to forget.”

Between You & Me – the band completed by guitarist Jai Gibson and bassist James Karagiozis – began to garner attention outside of their native Australia with the release of 2018 debut album Everything Is Temporary. A youthful, angst-ridden pop-punk album in the vein of Neck Deep and State Champs, it proved a solid foundation from which the band – spurred on by the modest success of anthemic lead single Dakota – could kick-start their career.

A well-received maiden UK tour supporting WSTR followed, with Between You & Me making a strong impression on many who saw them, including this writer, who witnessed Jake scale and subsequently fling himself from the balcony at Manchester’s Deaf Institute into the crowd below, much to the horror of the onlooking venue security. The band were bold, brash and confident, but Jake knew they could do more and do it better.

“Those were pop-punk songs written by a pop-punk band,” he says of Everything Is Temporary. “They were solid tracks, which is all we were really going for, and there’s nothing wrong with existing in that pop-punk world – as anyone in the industry will tell you, it’s been coming back for the last 30 years (laughs) – but for our next record, I was very much of the mindset that, stylistically, we would just do what we wanted and not give a fuck.

“We dropped a single called Supervillain earlier this year and some of our fans were like, ‘What the fuck is this garbage?’ But I’m okay with that; in my mind, we either develop and progress this band, or we keep writing songs like Dakota forever and I end up 40 years old singing about some fucking friend’s boyfriend. I feel very strongly about writing what I want to write.”

With that steadfast belief in pushing Between You & Me beyond their pop-punk roots as their motivation, the band were eventually able to record second album Armageddon – released November 19 via Hopeless – once they returned to Australia following the Canada debacle. In light of the five-piece’s recent experiences and those of the world at large, you’d be forgiven for expecting an album with such an apocalyptic title to be a rumination on how fucked everything currently feels, but a tirade about the pandemic is very much not what’s on offer here. Armageddon is a bright, euphoric helping of modern rock that expands on Between You & Me’s core pop-punk sound, packing a punch when it needs to, but equally unafraid to dabble in slick and shiny power-pop. New single Butterflies is a fine example of the latter, as Jake jubilantly sings about how he got together with his girlfriend. On the flip-side, opening track Pleased To Meet You and album closer Armageddon bookend the record with a more serious message about self-awareness and accountability.

“It’s taking a look at ourselves and all the shit things we do as humans,” Jake says of Armageddon’s more meditative themes. “It’s putting that stuff out there and saying, ‘Let’s stop fucking doing that.’ The track Go To Hell is a good example of that, where I talk about how so many people pretend to care about things on social media for a second in order to get some brownie points, before almost instantly forgetting all about it. There’s a lot of different layers and themes to Armageddon, but it retains the sense of fun and energy we’ve always had.”

Armed with their best work yet and an intelligent frontman in Jake who exudes a steely confidence and faith in the band’s ability to become a genuine force in alternative music, the future of Between You & Me looks promising. The ongoing effects of the pandemic and Australia’s stringent lockdown rules are still holding them back somewhat – the band were unable to star in the video for Butterflies or even partake in a photoshoot together – and while Jake is, as he puts it, “fucking livid” that Between You & Me couldn’t execute the visual representation of Armageddon he initially envisioned, he’s nonetheless enthused by the new music his band are ready to show the world, and convinced that its message, regardless of current circumstances, will shine through.

“This isn’t another fucking pandemic record or something that’s trying to get clicks,” he concludes. “We had something real to say with Armageddon, and while that message might not feel as subtle now, it still holds true. I’m confident that people will understand and appreciate what we’ve tried to do. In the end, that’s all you can ever hope for.”

Between You & Me’s album Armageddon is released November 19 via Hopeless.