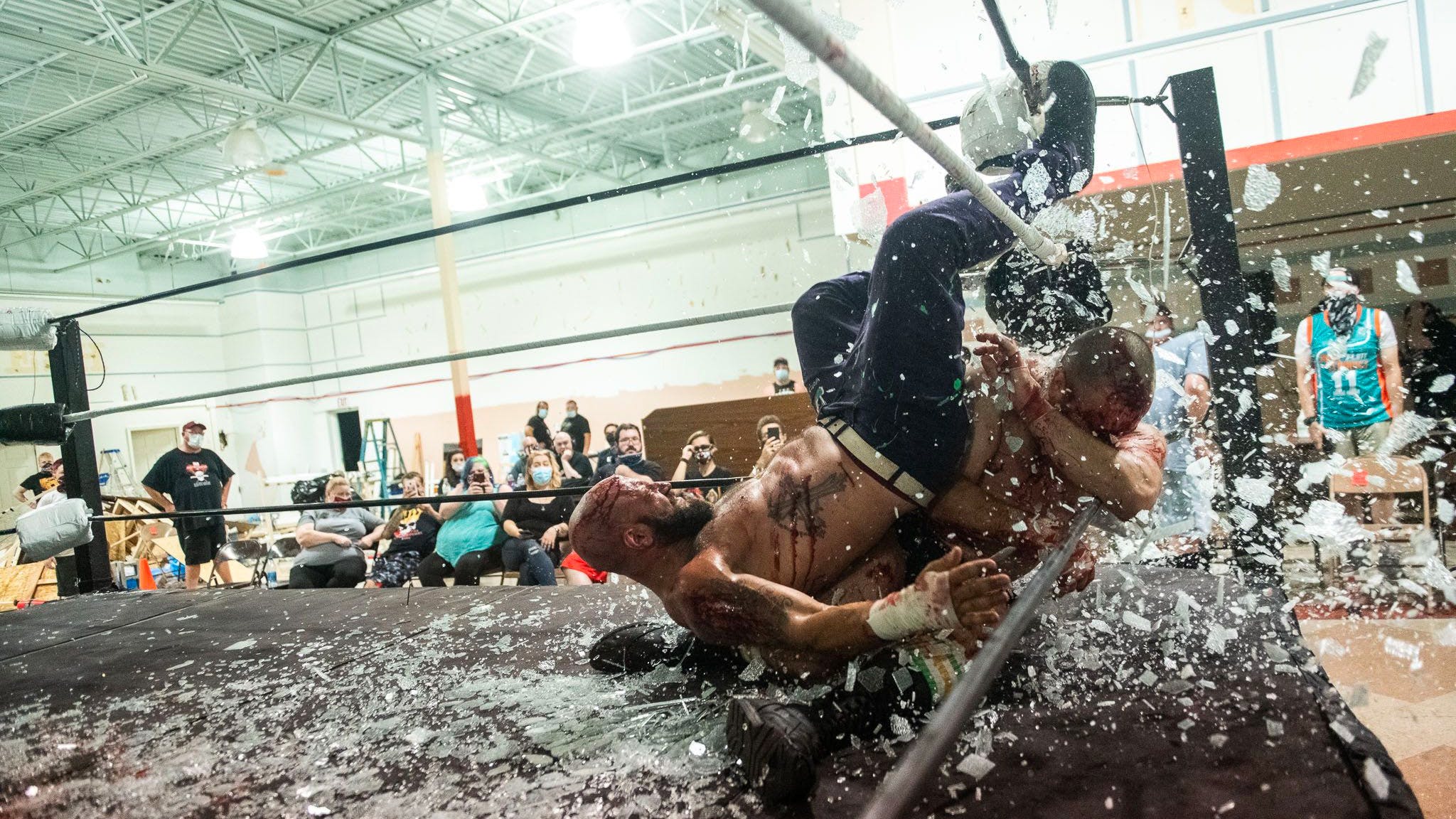 Flying fighters, blood-soaked brows, shattered glass, a cheering crowd – it’s all there in Nick Karp’s extreme wrestling photography. When you think of professional wrestling you might picture the multi-billion-dollar glitz of WWE – the chiseled physiques, the pricey pay-per-view events and dodgy Hollywood crossovers. But that’s not what's being celebrated in these photos. Instead, Nick likes to document WWE’s volatile distant cousin – the dangerous world of deathmatch wrestling.

Deathmatch – an off-shoot of hardcore wrestling – was born a bastard in 1950s Texas. Pioneering wrestlers such as 'Wild Bull' Curry introduced weapons and blood to their matches, pushing boundaries and courting controversy. Instead of grossing them out, this new brand of in-ring violence ignited a bloodlust in the audience that remains insatiable to this day. Although deathmatch has always been firmly underground, the style gained notoriety in the ’90s with the adult-oriented antics of ECW (Extreme Championship Wrestling) and giants like WWE and WCW incorporating blood, weapons and “no-holds-barred” matches into their theatre.

“[Deathmatch] is the weirdest scene in the world,” says Nick in a broad New York accent, taking a break from his day job. “It's basically the weirdest performance art in the world. I think we can all agree on that. They’re fake fighting – although I know some of it is real – and they’re telling a story, and I'm interested in storytelling. I want to capture the absurdity of what this is.”

The 27-year-old photographer from Queens, New York was introduced to photography at the age of 13. “My dad's a photographer, so he was doing weddings and bar mitzvahs,” Nick explains. “I needed money, so the minute I turned 13 I started assisting him. I was holding up lights, basically carrying his gear. But I never had the passion until I was in high school.”

In 2009, as a keen teenage punk and metal fan, Nick started a DIY music blog called rewritethescene, and wrote about all the bands that he was into. And it didn’t take long to realise that when he lied and told music industry people that he was a “photographer”, he got free entry to gigs. “So I borrowed a camera from my dad and just started shooting. I had no idea what I was doing, I didn't ask for help,” Nick remembers, laughing with humility. “I was arrogant and I just thought I was better than I was.”

The first show he shot was Against Me! with Silversun Pickups, but when he got home and checked the images he was disappointed. “All of the photos sort of sucked,” he says. “So I thought, 'How do I actually do this?'” He then spent the whole year working out how to use the camera through a process of trial and error. Eventually he began to feel some consistency in the quality of his work and has since shot gigs by the likes of Slipknot, FEVER 333, Dua Lipa and Kanye West.

In 2018, however, his friend invited him to a different kind of show altogether; a ‘No Ring Deathmatch’ in a New York bar organised by the pro wrestler Casanova Valentine. “There were like two bands and two wrestling matches. It was fucking brutal!” Nick smiles. “Like, you're in a bar, there's no ring and the action is right there in front of you. You have to move with the crowd, it’s wild.”

During the ’90s boom in deathmatch, many amateur wrestlers (mainly in the U.S.) began converting their backyards into makeshift rings and venues for matches. This went onto become creatively known as, you guessed it, backyard wrestling. During these dangerous and low-budget events – which still take place today – untrained wrestlers dive off roofs, set each other on fire and weaponise garden furniture.

There's no backyard scene in New York where Nick resides, but during the pandemic he was asked to shoot a deathmatch tournament for Zona 23, a company that put on shows in a junkyard just outside of Mexico City.

At the beginning of the pandemic, to eerie effect WWE were forced to record their weekly TV shows and monthly PPVs without an audience. Smaller independent promotions, however, had to work things out for themselves. Some closed, causing wrestlers to lose their incomes, and others carried on while navigating the COVID-19 restrictions and advice.

“When I saw wrestling was starting to run again, I thought I'd double-mask it and go and take some photos,” Nick remembers. “My whole industry died, I'm an event photographer and I have no other income. So I was just like, 'You know what? I’ll just shoot what's happening and if I get COVID? Well, you know, that’s just part of the story to tell.'”

There’s something about the gnarly deathmatches that has kept fans returning for decades – even during the pandemic. So what is it that keeps Nick coming back for more?

With his roots in live music photography, Nick explains how capturing these kind of events compares. “I’ve shot hardcore shows, I’ve shot punk shows, so I'm used to shooting a small, tight environment where a lot of action's happening… But this is different because it is literally like that but right in front of you! It’s really crazy to shoot; I still have a hard time, to be honest.”

If all this bloodshed and barbarism sounds appealing, Nick says there is no better time to get into deathmatch than right now.

“I think we are in the golden era. I think John Wayne Murdoch and Alex Cohen are two of the best in the world. They wrestled each other once and they’re going to do it again soon – I don’t think I’m allowed to say when. Oh, and Matt Tremont is the best wrestler on the fucking planet! I don't care what anyone says. This man is our current day Dusty Rhodes but in deathmatch. I haven't seen anyone tell stories like that man.”

While chatting to Nick and staring at his photographs, we find ourselves getting deep, discussing the meaning of aerial acrobatics and the beauty of barbed-wire brawls. The stoic philosopher Marcus Aurelius once wrote that, “The art of living is more like wrestling than dancing, because an artful life requires being prepared to meet and withstand sudden and unexpected attacks.” Being that Aurelius was a Roman emperor almost 2,000 years ago, it’s safe to say that he wasn’t referring to the broken glass am-dram we see in Nick’s photos. However, with the difficulties that the pandemic has thrown our way over the last two years, maybe that quote still stands up.

We wonder if thats that’s what draws others to deathmatch wrestling. The conflict, the danger, the drama and the jeopardy of it are all present in our daily lives. Also, as an audience member, watching bloody hunks battle it out gives us respite from our own personal battles. Deathmatch is the good, old-fashioned fun of a parish hall pantomime, but with some added ultraviolence and the chance that a fleck of blood or shard of glass will ricochet into our giddy faces. We get the rare treat of watching a conflict unfold in front us without being directly involved. We get to indulge our innermost bloodlust, dance with danger and inject some adrenaline into our otherwise muffled existences. Long live the deathmatch.