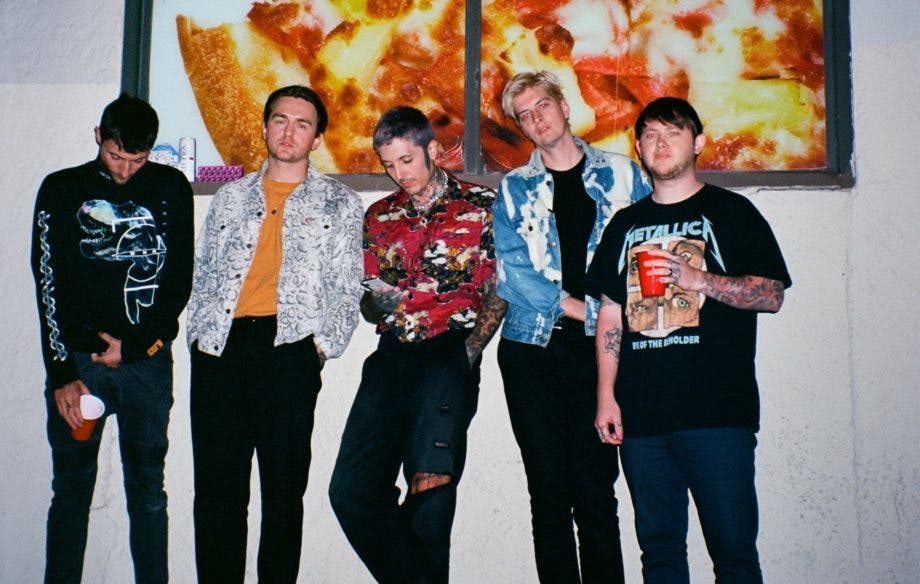 Welcome to amo – one of the most anticipated records of 2019. Here, multi-instrumentalist Bring Me The Horizon maverick Jordan Fish lets us in on some of its secrets, teases some of its sounds and lifts the lid on the intriguing collection of guests they’ve invited to be a part of the process.

1. i apologise if you feel something

“We wrote this with the intention of it being a kind of intro to the album, but it ended up being something in between that and a full song because we loved it so much. It’s pretty much just electronics and vocals. We wanted to set up MANTRA, and because it’s been out already we didn’t want that to be the first thing that people would hear on the album. So this sets the tone with the right level of emotion. It’s a really special one for me, and it’s very different for us. I’m sure a lot of people will be surprised when they hear it, because it’s unlike anything we’ve done before. There may even be a hint of this on our next tour…

“The song is essentially someone saying to their partner that they are in control of their own heart. Like, ‘Sorry if this hurts you, but your love is yours to give, so if the relationship isn’t working for you that’s your prerogative.’ It’s a theme that runs throughout the album.”

“We had a bunch of songs we were really happy with, but we didn’t have that one that we felt we could come back with, as the album is so varied there was no middle ground between what we’d done before and the new material. Once we had that conversation, that subconsciously pushed us towards writing MANTRA. It’s not necessarily representative of the record per se, but you could say that about any of the songs out of the context of the album. There is a thread between the songs, but no two tracks are alike.”

“This is an example of us really going for it on this record. It’s like this dark rave song or something – it’s absolutely mental, and it might be my favourite on the whole album. I’m sure people will hear it and go, ‘What the fuck?!’ but whatever. It’s very different in sound for us. We’re big fans of Grimes and she loved the song. She actually sent it back with all these added elements which we weren’t expecting, but she’s super-creative and she’d completely gone to town on it. That elevated the song to a whole new level. She’s someone we respect, and not really someone you’d expect to find working with a metal band. Or a rock band. Or whatever it is we are…”

“This is one of the more poppy ones. Or at least it’s not very heavy, or got rock guitars. It’s from the perspective of someone who’s found out their lover’s been cheating. It’s musically very different for us. We’re so proud of it. We wanted to make sure it was positioned quite early in the record so it wouldn’t get lost. And while it’s poppy, it’s still quite dark. We don’t worry about what people might think of that. It’s not a healthy mind-set to be in when you’re trying to write music.

We try not to let what people might expect from us affect us creatively, but at the same time we do still like heavy music. So it’s a consideration. No-one wants to completely alienate their existing fans. I’m sure it’ll take people a minute to get it, but I have so much confidence in the album in general that I know they’ll come around.”

“This is one of the heavier ones on the album. It’s quite tongue-in-cheek and ridiculous in places. Not many people know that Oli and I went to LA last year to work with Limp Bizkit. We were going to produce their album and it… didn’t work, but that’s a whole other conversation. That’ll be my book some day, when this whole experience wraps up. Anyway, the main riff in this song is one we had for them that we ended up not using. It’s this really low-tuned, bouncy nu-metal riff and if we only got one thing out of that absolutely terrible experience, then at least we have this. Then one day Oli said, ‘Wouldn’t it be sick if we got Dani Filth on the middle eight?’ in one of his crazy creative brainwaves. Nice guy, by all accounts – I didn’t get to meet him. I don’t think he drinks the blood of virgins in real life.”

“ouch is another interlude-type track. It’s got some lyrics from another song that we didn’t end up using in the end, but we really liked the words and they tie in nicely with the themes of the record. So we wanted to find a way of keeping them. They’re a bit of a callback to one of our old songs for fans to pick up on. I’ll leave it at that…”

“It’s about people who are negative influences and how when they leave your life things get much better. It’s a mixture of the electronic and radio-friendly elements of our band, but it’s still got characteristics of some of the bigger songs we’ve done before. You’d need to ask Oli who exactly that’s about, but I can think of a few people it might be about…”

“One of the heavier, riffy songs. It’s got a metal-meets-Britpop feel to it. It went through a few different variations, but we nailed it in the end. It’s quite fun and quirky, so I think it’ll be a good one to play live. The chorus is a weird falsetto thing that goes, ‘Sugar, honey, ice and tea.’”

9. why you gotta kick me when I’m down

“It’s Oli talking about his relationship with fans of our band and how they might have opinions about him and his personal life. Yet it also goes deeper than that. It comes from a personal place, from a time when things weren’t necessarily going his or our way. Oh, it has my local village’s kids’ choir on there, too – another Oli brainwave. It reminded me of Pink Floyd [Another Brick In The Wall] or [Jay-Z’s Annie-sampling Hard Knock Life] ‘It’s a hard knock life.’”

“This is another interlude. There’s not really much to say about it other than it’s very different for us.”

“Vocal-wise it’s quite a big song. There’s a little bit of Portuguese in there, which is quite unusual. It’s kind of a big, anthemic song. It’s probably as close as we get to something like Drown on this album. It’s a love song, so it’s an emotional one.”

“Rahzel is a beatboxer from The Roots. We had this demo for ages, and the beat was so crazy and heavy it sounded like a beatboxer. I was like, ‘If we got an actual beatboxer on it, that’d be sick.’ Back when the internet first became big, there was this viral video on LimeWire of him beatboxing, so we got in touch and he was up for it. The title is completely ironic – a nod to how we’re completely not heavy metal. There’s a little five-second clip at the end of the track that’s the heaviest we’ve sounded in years.”

“Oli wrote the lyrics about his friend Aidan. He was at our Teenage Cancer Trust show at the Royal Albert Hall after he’d recovered from cancer, and Oli gave him a shoutout onstage. But unfortunately the cancer came back and Aidan passed away. This track is in his honour. He wrote this thing before he died – like a poem, but not really – and all the lyrics are taken from that. It’s a very personal one for Oli, and it felt like an appropriate way to end the album.”

AmoK! Track By TrackBring Me The Horizon