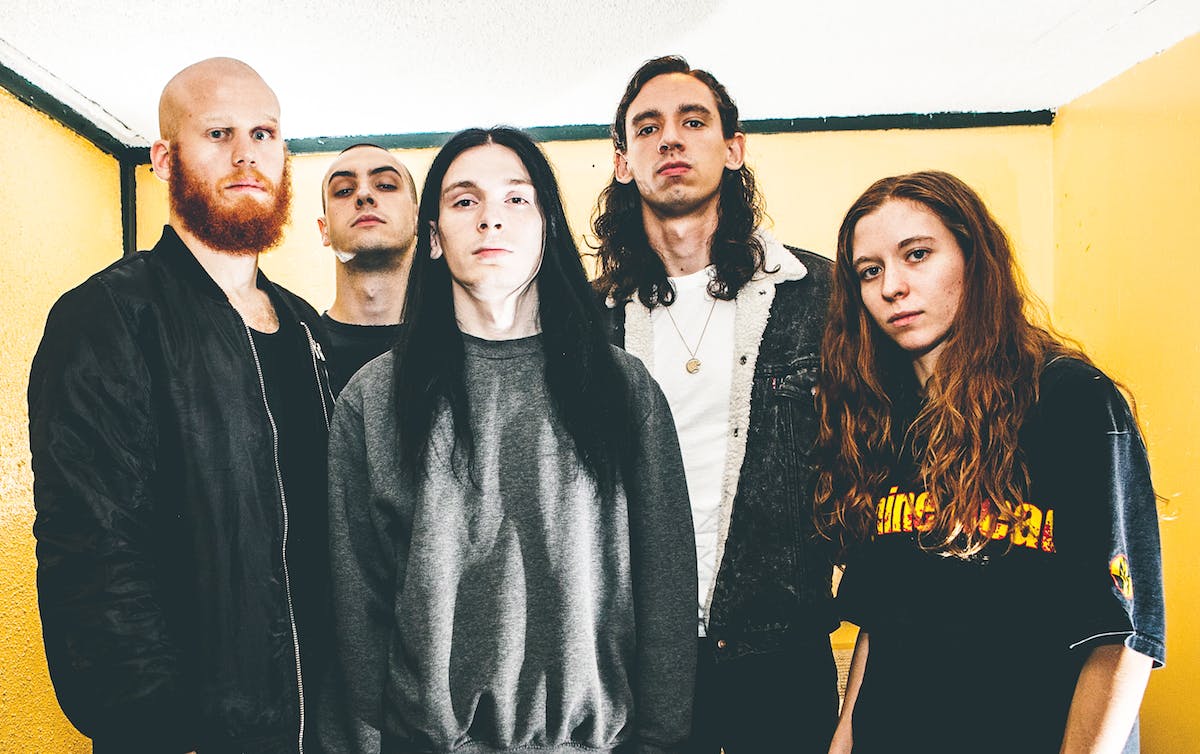 For most bands, having utterly crushed 2017 – dropping the most essential heavy record of the year and cracking into the mainstream consciousness with a GRAMMY nomination – would’ve been cause for some hard-earned rest and relaxation. Code Orange, though, are not most bands. Picking up at the same bloodstained spot where they left off, the Pittsburgh steelers unleashed rabid new single Only One Way through Adult Swim only days after a GRAMMY ceremony where they narrowly missed-out to prog-metal royalty Mastodon. Today Only One Way, alongside a remix called only1(the hard way), got released in the UK.

A reassurance that their thrilling new reality is still just in its earliest stages, it comes on like some twisted cousin to Forever stand-out Bleeding In The Blur: moody industrial atmospherics distended and scarred in the name of ruthless progression. We caught up with frontman Jami Morgan to talk where this new music came from, what it means within the broader Code Orange catalogue and how they’re fired-up to make 2018 another year fans will never forget...

Hi Jami! Where did Only One Way come from?
We’ve been working on it for a while. I want to try to start putting music out a little bit more sporadically alongside the records. I want to be a part of modernising that [release] process in our kind of music. Other bands have done it, but I want the presentation to feel a little more modern, a little more immediate. We’ll keep doing the records, too, which are a lot more traditional. We wanted to drop something out of nowhere. But we wanted it to be something we’d really worked on – not just a B-side or something throwaway. It’s completely fresh stuff. It was nice to be free. The thing about records is that everything kinda’ plays a part. It’s hard to be free to make something structurally wild because it won’t fit with the record. This is a song I’d never put on an LP, but not because I don’t love it: because it wouldn’t fit in the story we’re trying to tell.

Explain that concept...
We had a concept of what we wanted the song to sound like and be. What we wanted to do was to throw in a couple of influences in there that we hadn’t been able too. But more than that, we wanted to start with this conventional verse-chorus-verse song with a juicy [hook] and some great vocal lines and then grind it through our machine. It’s almost like saying ‘We could do this if we chose to, but we choose not to!’ I think it’ll tie into future releases – and it will. I wanted to implant some hidden gems and ear-candies that people will see us bring back. But I also wanted to tell an album-length story in this short song. Song people listen to it and say that it all sounds slapped-together. It’s not. And the more you listen to it, and the further we get into the future, the more you’ll see that it makes sense. It’s like a trailer for the past and the future and bridging that gap. It’s this catchy song that we f*cked up in this strange, digital way.

Do you see it as part of the Forever cycle?
It definitely bridges the gap. I don’t really think about these things in ‘cycle’ but I do think about things thematically. I’m building one path that’s our LPs. This is part of a side path with these singles and the electronic stuff that Shade [Eric Balderose] is doing. They’ll all tie in together. It’s like those movie series that come out, and there are TV shows that fill in some of the story. I want to build on our themes. Nothing is random. This is post-Forever, but it’s a little more on the Forever side than what’s going to come next...

Looking further down the line, how important do you feel the ability to drop individual songs out of nowhere is going to be?
The reason we can’t drop albums out of nowhere is that the metal world is nowhere near there yet. The level of attention that comes with an album is completely different. I want to be a part of building it slowly. I think other types of music like rap have become almost solely about releasing music in that way. They’ve become the mainstream. And it’s a cool way to tie in with a younger audience that might not even be there yet for metal and bands like ours. It’s equal parts about that as about the artistic vision. I think we can be excited about making and releasing singles in this way while still focusing on the linear path that the LPs are on. I want it to be all about quality. I think that can be where genres like rap go wrong: they put out a lot of crap just to pump it out because they can make money. Because we can’t really make money on this, I don’t really want to just pump it out. It needs to suit the artistic purpose. I want it to be great.

So we can definitely expect more of this type of release in the future?
Oh yes. There’s a remix of this coming out. Also, when we went out on the Forever Tour, Shade brought out a record of electronic remixes called It’s Almost Forever that was only available on the tour which we’re going to release soon, too. It’s nice to build the mythos and the themes with that kind of stuff.

Having already dropped the video for The Mud with them, what is it you like about working with Adult Swim?
We got the opportunity to do this and the video for The Mud together, but they’ve kinda’ spanned out from each other. Honestly, it’s our fault. I wanted it to be great and we took a really long time delivering it. I really like what they do with the singles series because there’s really no metal or hardcore bands involved [other, maybe, than Zeal & Ardour] and it’s a platform to reach some new people who’d be listening to the rap or hip-hop or indie.

How do you feel about the Grammys now?
I feel great. We definitely wanted to win, but we wanted to win just to have that platform to get to talk to some people and hopefully put this music and the underground on our backs. I wanted to be able to make that speech. I wanted to be able to talk to some of the media outlets who even passed on talking to us that day! In that way we were disappointed. But that stuff doesn’t make or break anything. I think we’ll definitely be back there.

Like I’ve been saying – it’s well-deserved that Mastodon won. But it would’ve been cool if Mastodon were able to win five years ago, if we were able to win this year, and if whoever is in this position in five years time were able to win then. It would cool to be able to have it as a rocket to strap on and give ourselves a little bit of a boost – rather than just something to put on the shelf, even if it’s something that they absolutely deserve to have on the shelf! I think we will get one. I just hope it’s sooner rather than later – something other than a legacy award that’s able to actually boost your profile! But, looking forward, we put a song out a couple of days later, we’ve got a couple of shows coming up, and we’re just focused on continuing to practice and to work to make things better than they already are!