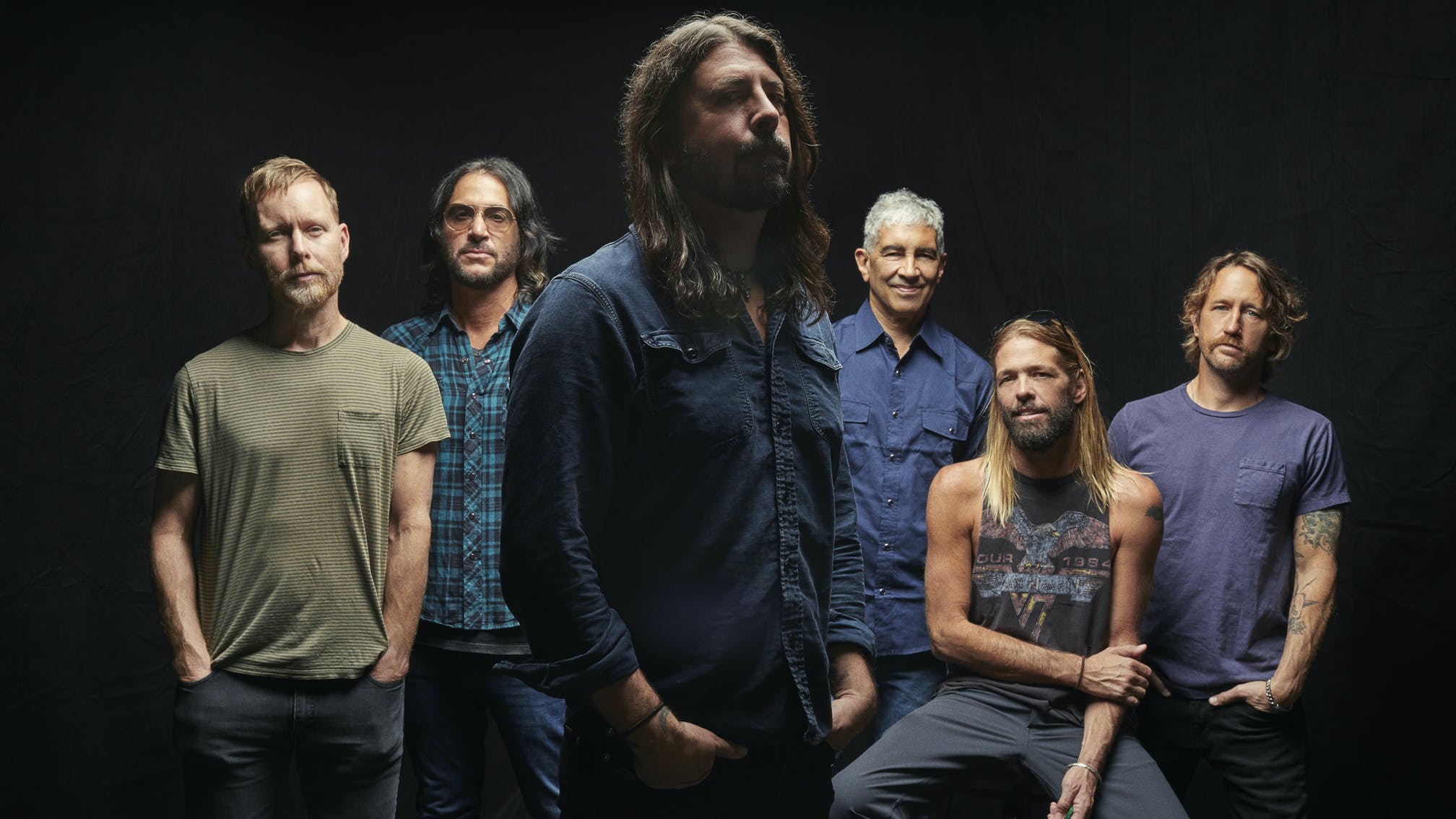 At the beginning of this year, says Dave Grohl, Foo Fighters looked at their 2020 schedule and saw “an entire world-domination itinerary in front of us”. There was to be a very special U.S. headline run – labelled the Van Tour – in which the rock titans would be celebrating the 25th anniversary of their inception. Then, they would unleash their 10th studio album – the follow-up to 2017’s excellent Concrete And Gold. With the record finished in February and their live schedule carefully plotted out, the band showed no sign of slowing down. Of course, we all know what happened next.

After putting everything on hold (or, in the case of their 25th anniversary run, scrapping it completely), Dave occupied his time wisely in the subsequent months. From surprising key workers in the midst of the COVID-19 pandemic to covering Times Like These for charity and finally joining Instagram to tell some of his life’s most fascinating tales, there was no shortage of Foos fun – only a lack of new music for fans to enjoy. That all changed on November 7, however, when the group took to Saturday Night Live to premiere spell-binding single Shame Shame, the lead track taken from upcoming LP Medicine At Midnight.

Today, then, we interrupt Dave from “hiding out and doing some writing” to dig into his year so far, new music, and why you should always expect the unexpected from Foo Fighters…

How has 2020 been for you, Dave? Is there a sense of normalcy now returning with the release of Shame Shame, and the announcement of Medicine At Midnight?
“Well, I mean, we finished this album in February of this year. We were ready to hit the road, the artwork was done, the vinyl was being pressed… we were really looking forward to this year, and then we had hit pause and everybody went their separate ways. This is really the first break the band has taken in at least a decade; we’re always on the road, and we’re always making records, and always doing something. So, for it to grind to a halt was really strange. It proved to be really challenging, but also positive in a lot of ways. I think everybody finally found the time to do the things that we always wanted to do but were always too busy, and then as time went by we just decided, ‘Well, more than anything we want people to hear the new record. We can’t go out and play shows right now, but the music is worth hearing.’ So we regrouped and came up with a new plan – we had to rethink everything and adapt to what’s going on now.”

When did that happen?
“We started getting back together about two months ago, and just to be in the same room with the guys again – instruments or not – felt like coming home. I went, like, six months without seeing Taylor [Hawkins, drums], or Pat [Smear, guitar], or Nate [Mendel, bass], or Chris [Shiflett, guitar], and that’s really strange. I’m closer to them than most people in my life. And then to actually strap on the instruments and start playing these songs that we recorded a year ago just felt so fucking good. It almost seems like being a band again (laughs). There’s just no-one to play to at the moment. But we did a little acoustic thing that was shown recently [Save Our Stages Fest], and playing for an empty club seemed strange at first, but just sitting on a stage with a microphone and your band… it was fulfilling in that we still can play, you know? Even if it’s to an empty room, it’s pretty good.”

What was the process of making Medicine At Midnight like?
“We recorded it in this fucked-up old house in my neighbourhood instead of using a studio, and every day we’d come in with a basic idea, like, ‘Okay, here’s the rhythm of the song,’ or, ‘Here’s the basic riff,’ and we would build on that. We didn’t necessarily all sit in a room, work out the song and then hit ‘record’; it was more like we were building it from the bottom up. And, seven months later, to then finally get into a room and finally play these songs as a band felt so fucking good – and really easy, to be honest. It’s one of the easiest albums for us to perform. There have been other records where we’ve recorded things that have been a bit more technically involved, and this one was just big guitars, big fuckin’ grooves and big fuckin’ choruses. As we were writing the songs I was really imagining, ‘Oh god, this is gonna be so good at the festival,’ or, ‘This is gonna be so good at the stadium.’ I really took the live show into consideration, and made these anthemic choruses that I imagined 100,000 people singing along to. Unfortunately that’s not gonna happen right now (laughs).”

What made Shame Shame stand out as the first song to show people compared to other new material?
“When we first started recording the record, we were recording songs that were recognisable as the Foo Fighters. Actually, the first song that we recorded is the first song on the record: Making A Fire. And that really kind of set the tone, like, ‘Okay, this is really up and really fuckin’ big, and let’s keep moving in that direction.’ And after a few weeks I came in with this idea, which is originally based on a simple guitar riff and this unusual rhythm which is a drum set recorded in a stairwell, but then there’s this finger-snapping and stomping and clapping loop that’s behind it. Those two things started coming together, and rather than load a lot of things on top of it, we kept it really simple: there’s an acoustic guitar, an electric guitar, a bass, a vocal, and also this keyboard part. It was noticeably different than anything we’ve ever done, and I always think that when you’re releasing a song before an album, you want it to give a little bit of pretext for things to come; you want to present this to your audience as some sort of indication that we’re not just making the same Foo Fighters record again. And there was something about it, with the vibe and the rhythm, that just seems like new territory for us.”

Did it mean there was then more freedom for experimentation?
“I remember after we recorded it, it immediately opened up a whole new area for the band to pursue: after we did that, we ended up recording the songs Medicine At Midnight, Love Dies Young and Cloudspotter – these were all songs that were just unlike anything we’ve done before. The melodies and the tone of this record is still the band, but it’s just kind of a new aesthetic. And so after we recorded the song – which was pretty early on in the process – we knew that there was this new freedom to be able to explore other sounds. [In terms of releasing it as the lead single] Shame Shame really was the song that everyone fell in love with first, and after that there was Waiting On A War, and we thought, ‘Oh my god, this is one of the best songs we’ve ever written. It is recognisable as a Foo Fighters song – but let’s not start there!’ Or there’s a song like Love Dies Young, which is, like, the biggest fuckin’ party anthem we’ve ever had! We were like, ‘Okay, let’s not start there; let’s start at this other place so that people are somewhat surprised…’”

Given that you had all this extra time after finishing the LP in February, was there a temptation to go back and change anything – big or small?
“You know, there was absolutely no desire to change anything. When we finished the album, it was exactly what we wanted it to be. We started thinking about this album and writing it almost two years ago, and we recorded it in a way that we’d never done before; we didn’t sit in a room and rehearse and write these songs. They were all born from these demos that I had been doing where I had decided, ‘Okay, it’s our 10th record, we’ve been a band for 25 years, what do we do? Do we make some sleepy acoustic album as we ride off into the sunset of our career, or do we make a fucking party record?’ And our love of rock bands that make these upbeat, up-tempo, almost danceable records inspired us to make the album that we did. To me, there’s songs on the record that are rooted in Sly & The Family Stone, or David Bowie, or The Power Station, and things like that. We sort of relied on a lot of these really energetic references and influences to put this one together – and we surprised ourselves.”

Medicine At Midnight will be released February 5, 2021 via Roswell Records/Columbia Records.