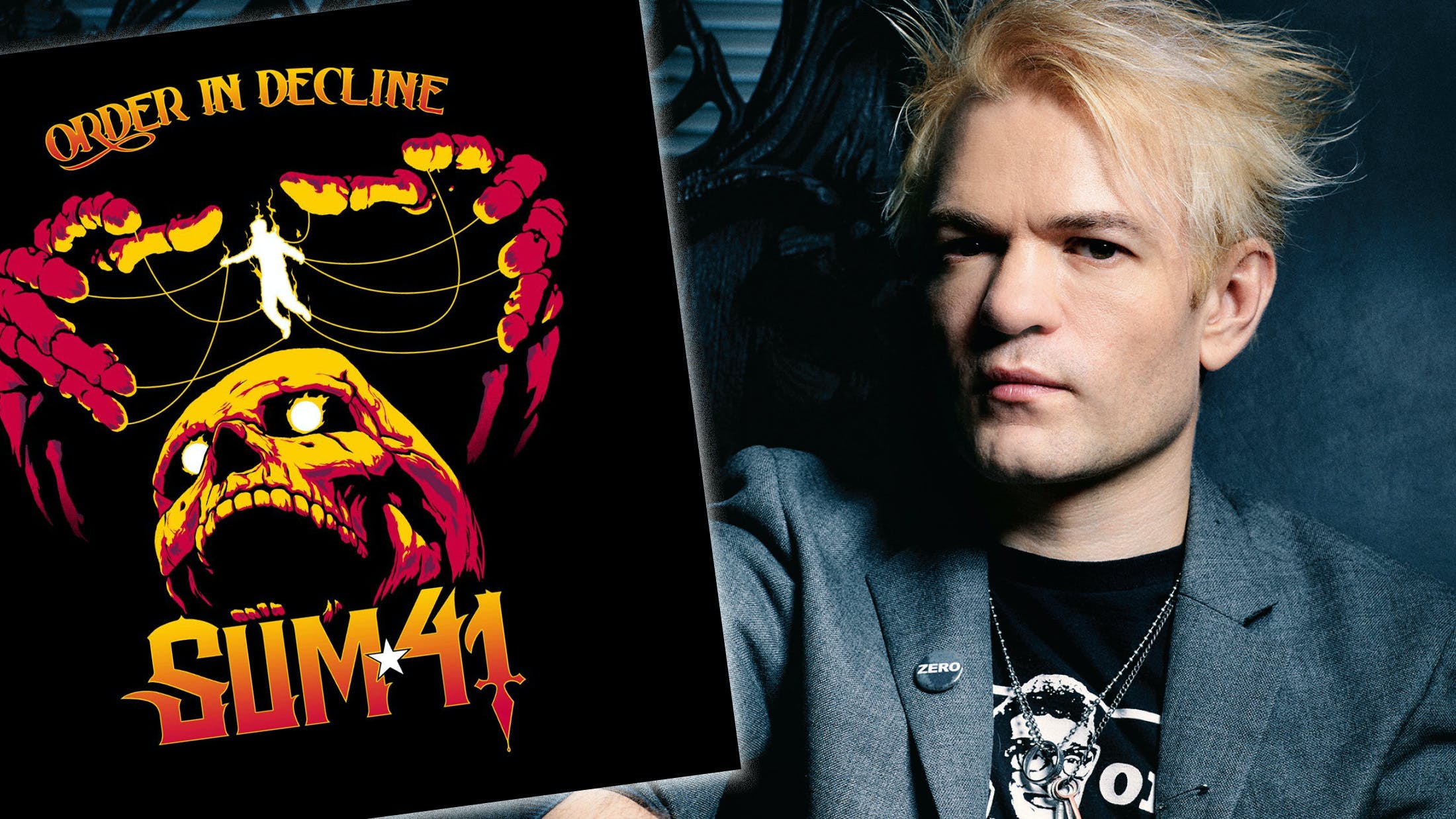 Fresh from smashing the K! Pit (missed it, get on that immediately!) Sum 41 release their 4K-rated seventh album, Order In Decline today. While you get involved in that, we've grabbed the band's affable vocalist and guitarist Deryck Whibley to discuss the finer details, the song inspirations and to help provide us with a greater understanding of why this may be the band's most personal yet politically-charged album yet.

“Musically, this is kind of my favourite song on the album. I like all the directions it goes in. It's got some riffs, it’s got a guitar solo, it's fast, it's got some slow parts and it’s got melodic stuff, it's got some shouting and screaming. It's one of the first songs I wrote for the record, and lyrically, like everything I do, I just started writing words. I don't really know what they're about. I sort of just follow it. But it felt like the closing of a chapter, in a way; like putting everything in the past. The past five years, everything has been so new for me. It was sort of a song to close the years previous to that point. Songs have a way of working themselves out. I always feel like the music tells you what to do.”

“It was the first single for the reason that we felt like it kind of checked all the boxes of what this record was about. There's there's some heavy stuff in there, some crazy guitar solo stuff, there's different riffs, it's catchy, it has a melodic chorus, and to me it sounds very Sum 41. But it also has some different stuff that we haven't really done before. It leans on the heavier side of us a little bit more than we have in the past.”

“I've been saying this is not political record, because I'm not really speaking about anything specific. But there's certain themes and things that were just floating around out there in my mind. So things start to kind of creep in. I remember writing this song around the 2018 midterm elections in the U.S. when everyone was talking about this ‘blue wave’. The Democrats really had to step up and win a lot of elections throughout the States. And they kept calling it the blue wave. So for me, while that was all going this felt like this was an anthem for the blue wave.”

A Death In The Family

“This takes me back to that 2016 election between Donald Trump and Hillary Clinton, when Trump won. 'A death in the family' was the way I described my feeling that day. In fact, for about two weeks, I felt I didn't know how to describe how I was feeling – I just felt like I couldn't really do much. I was just kind of moping around and I had no motivation to do anything. I didn't even want to watch TV. I’d just sit there and wonder what the fuck just happened."

“It’s an angry song, but it's very personal. I feel like if I had to describe myself to somebody, I’d say I'm pretty mellow, I'm pretty quiet and pretty patient. But if you cross that line with me – which doesn't happen very often, but then it's like a complete 180 for me. I can be pretty angry. But it rarely happens. You don't really want to get on that side of me. That song just like poured out in seconds. In fact, this was a really fast record. It just came out of me. And there was no stopping it. And when it did stop, I totally dried up. I actually kept trying to write for months and months after, but I was getting nowhere."

“Some people might get the reference, and maybe it's more obvious in the U.S. for people who don't want to say his name or call him the president. So those people call him 45. This was an early song, when I realised this asshole was taking over my music. And I tried to change the words to go somewhere else with it, but I had nothing and it didn't make any sense any other way. It was just bad, so I let it come out. I remember during the election, I was going out to restaurants with my wife and you would hear some tables close by all of a sudden kind of get a little heated in their discussions, and you’d realise they were talking about Hillary and Trump. That’s how I realised how many Trump supporters there were. And the conversations were very racist. I was like, ‘Jesus, in LA?’ I was really surprised. I've also come to realise though, that the racism of it is not everybody. But there's certain people who are that support him. But then there's also people who are liberal, who are benefiting somehow, from what he's doing. I just don't play into his division. I think that's one of the worst traits of him as a leader. He likes this division. And he likes bringing it around the world too. I would hope that the fan base would understand where I'm coming from with this. I'm not against people who vote for him, I understand that whole thing. He's just not my kind of guy.”

“The main thing that I'd like people to know about this is that it's not just about me not knowing my father. There is that; the song is about the bond we actually do share – that we don't know each other. We share this missing piece, this bond of something missing. And that's all we have, and I don't share that with anybody else. That is at the core of it. But it's also kind of a nod to my mom, who was such a great, strong single mother, that I didn't need to think about him, it was sort of a subconscious thought. So it's kind of like all those three things wrapped up in one to me.”

“This was one of those, what I call ‘throwaway' songs. They’re the ones I don't think I will ever use. It was just like, ‘Oh, this weird sound came out, I'll never use it, but I'm gonna record it just to have for whatever.’ And once it was mixed, it sounded really big and kind of fun and just kind of rocking. And when I put it after Never There in the sequence, it made sense in the context of everything.”

“I guess it's another song about Trump. I don't get that hot and bothered by every little thing that he does or happens every day. But I know people who do and they go, ‘I can't believe he's doing this,’ and it's like they get so emotional about it. I can totally understand that. But my view is that it's just another thing that goes on the tab that he'll pay for eventually. It's just one big bill, you hope there's karma building. That's what sort of keeps me sane.”

“Catching Fire was a strange one. It's another song about a couple things, but it's also about one thing: love. It's a love song really, about how I don't know what I would do if I didn't have my wife. Also again, in the subconscious there were things rattling around, including the rise in suicide. Celebrity suicides like Anthony Bourdain, Robin Williams, Chris Cornell, Chester [Benington] and Kate Spade were sort of in my head at the time when my wife happened to be away. So I was home alone and I had this lonely feeling, because we're very rarely ever apart. And I was thinking about those things. And about what their families thought. I don't know if I've ever suffered from depression myself. I don't know how to explain it, and I don't want to because it's a touchy subject and I don't want to say the wrong thing. I've been down and I've been bummed out about things, but by the end of the day, I'm always fine. But I was thinking of it from that perspective of the person who's left behind. And I was thinking, ‘I don't know what I would do if I ever lost my wife.’ So it's sort of a twisted love song in a way. But it makes sense for my wife and I. I don't think she would have it any other way.”

Sum 41's new album Order In Decline is out now.