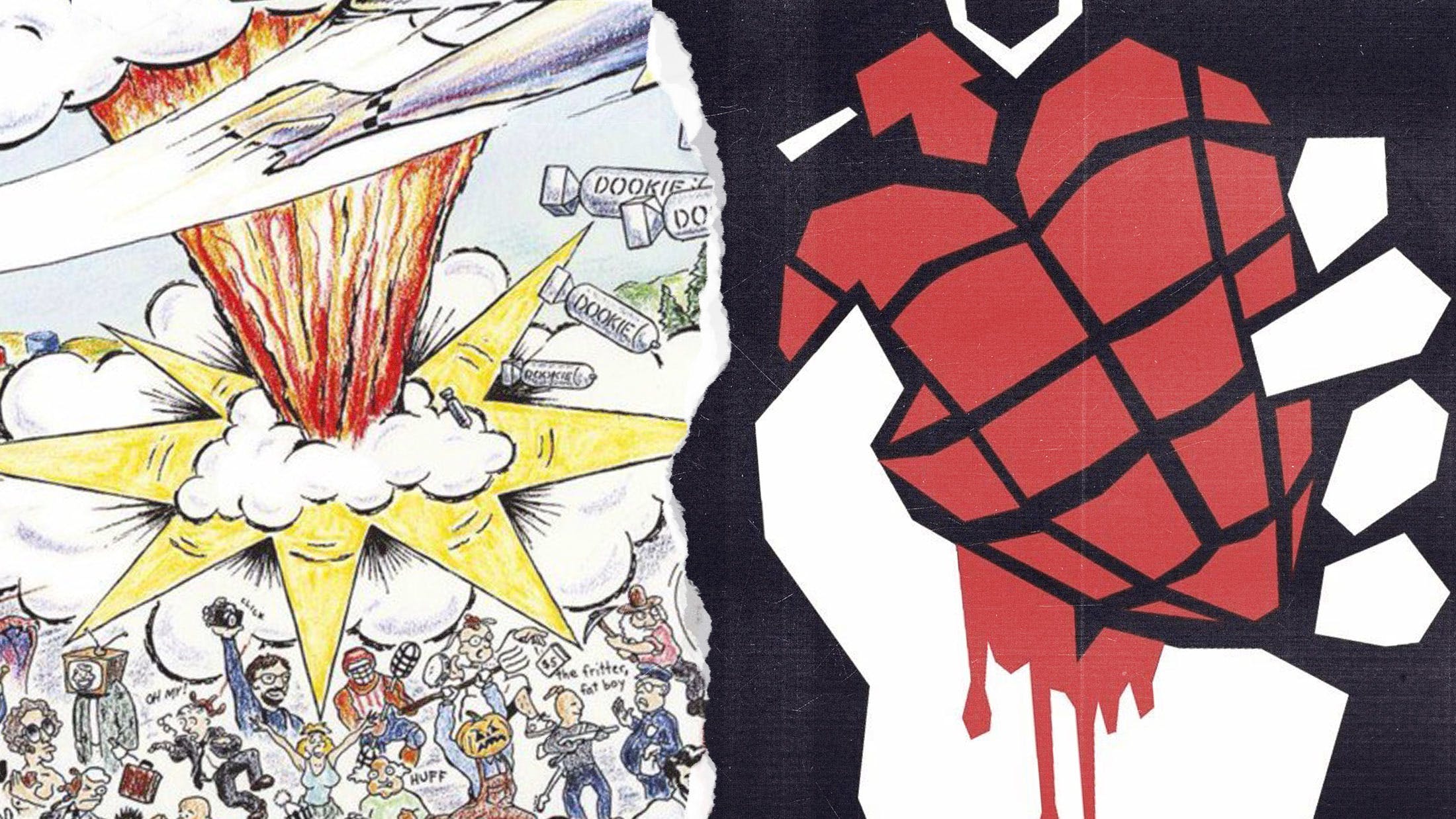 February 1 marks the 26th birthday of Dookie, the album that first brought Green Day to international attention and which, for the first time, smashed the glass ceiling that separated American punk rock from the mainstream.

In the autumn, American Idiot, the Oakland trio’s seventh LP, will celebrate its 16th year of release. For the genre that Green Day represent -- and have represented since they first appeared onstage at the Holy Site of 924 Gilman Street under the name Sweet Children in 1987 -- it is the first of these occasions that is the most significant. But in terms of the group’s own music, it is the second that towers.

To understand why American Idiot is Green Day’s finest work, one must also consider Dookie. Only an arch contrarian, or an idiot, would deny that the band’s blockbusting third album is anything less than a peach. It has effervescence, it has fizz, and it is teeming with caffeinated pop songs that enter the ear without an exit plan. But it is adolescent music made by three young men themselves not long out of adolescence. American Idiot, on the other hand, is an adult album, and one of such quality that, at least in parts, it’s difficult to believe that it was made by the same band.

For a start, it is much more punk than Dookie. The exquisite She’s A Rebel makes its point in exactly two minutes, and with the kind of efficiency that would surprise even their younger selves. Letterbomb, multi-layered and deceptively sophisticated, believed by Billie Joe Armstrong to be the finest song to which he has placed his name, surges along with the kind of propulsion normally utilised by Wile E Coyote, clinging to a rocket manufactured by A Company that Makes Everything, in pursuit of the Roadrunner. On St Jimmy, the album’s most barnstorming set piece, the band cutely channels the Ramones, as drummer Tré Cool announces the song’s tempo with a count of '1, 2, 3, 4!'

St Jimmy himself carries with him 'cigarettes and ramen and a little bag of dope', and identifies as 'the son of a bitch and Edgar Allen Poe'. It is lines such as this, sewn like grass-seed throughout the album, that allow Billie Joe to emerge, here for the first time, as a consistently world class lyricist. American Idiot’s status as a political album may be overstated, but when the singer does address the state of the union he does so with poetry and precision. 'There’s a flag wrapped around a score of men', he announces on Holiday, a song that understands that the conflation of conflict and country is good for business, but it’s nothing more than 'a gag, a plastic bag on a monument'.

In 1977 Johnny Rotten, singer with the Sex Pistols, laid down punk’s founding principle in the lines 'Don’t ask us to attend ’cause we’re not all there / Don’t pretend / ’Cause I don’t care'. This nihilism burned through the genre in its original form, and promptly razed it to the ground. As representatives of punk rock’s second wave, Green Day are not the first in the class to make music that is better than that with which they originally emerged. But they are unique in having bloomed so spectacularly, and so unexpectedly, well into their third decade. Such was the album’s nuanced brilliance that on Homecoming, one of the two nine-minute tracks that cantilever the entire set, Billie Joe Armstrong was able to subvert punk’s first amendment. As if in response to Rotten, he asks, 'does anyone care if nobody cares?'

In 2004 listeners responded to American Idiot with mouths like paella pans, and they were right to. They still are. Whether it’s the beautiful and resigned sigh of Whastername, the album’s closing track, or the masterful mission statement that is the title-track itself, this is a record that rarely places a foot wrong on its long journey across the wide expanse of its own ambition.

A punk rock album to equal the Pistols’ Never Mind The Bollocks, and an epitaph to an age when an album could serve as a unifying force to no fewer than 14 million people, American Idiot is Green Day’s finest hour.

When Billie Joe Armstrong sings, ‘I heard you crying loud / All the way across town’ on When I Come Around, Dookie’s gorgeous fourth single, he may as well be singing about me. Why? Oh, you know, just due to the fact that it’s not universally agreed by everyone that Dookie is Green Day’s best album. Because it absolutely is.

(A personal note, before I attempt to look at Dookie objectively: this album changed my life when I was around 11 years old. In what is probably the most depressing, non-punk story ever, I picked up the CD while shopping with my mum in a supermarket, peeled off the ‘Parental Advisory’ sticker and asked her to buy it for me based on the Richie Bucher-illustrated artwork alone. I definitely wasn’t prepared for the profound impact it would have on me as I took it home and listened to it as quietly as possible in my bedroom, so no-one would hear the swearing and swiftly take it away from my young, innocent ears…)

American Idiot is a near-perfect record – as are many of Green Day’s full-lengths (1995’s Insomniac and 1997’s Nimrod in particular, though I’d argue that 2009’s underrated 21st Century Breakdown is pretty flawless, too). But Dookie is a complete masterpiece. Where the trio’s seventh full-length doesn’t always hit the mark (Give Me Novacaine and Extraordinary Girl are the skippable points for me – sorry), there’s not a single lull in Dookie’s dazzling 39 minutes and 38 seconds. It’s self-deprecating, snotty, sarcastic and even sassy, yet quietly mature; it's often simple and effortless without ever losing its sublime crunch.

Let’s start with the songs. There’s truly no better album opener in pop-punk history than the dynamite Burnout. Singles don’t come finer than the likes of Longview, When I Come Around and Basket Case. The album’s non-singles – the breathless In The End; the brilliant, bouncy Coming Clean; the surprisingly furious F.O.D. – don’t let up for a second. Hell, even goofy ‘hidden’ track All By Myself is memorable in its own way. Moreover, they’re all incredibly clever pieces of music, a real accomplishment given they’re housed on an album named after poo. In Basket Case and Coming Clean, Billie Joe bravely grapples with bisexuality (his changing of the ‘whore’ to a man in the second verse of Basket Case to “challenge” the listeners is genius), while his battles with anxiety, loneliness, panic disorder and leaving home are ingeniously documented and painfully accessible.

Each individual performance from the members of Green Day is unreasonably impressive – especially considering their age at the time. Billie Joe may seem like the star of the show, with his superb knack for hooks and melodies at the forefront, along with his charmingly bratty vocals and endlessly relatable lyrics. But bassist Mike Dirnt’s four-stringed efforts on Chump, She and the iconic Longview (initially conceived while he was high on LSD) make him Dookie’s unsung hero, while Tré Cool’s drum fills on Burnout no doubt still inspire thousands of aspiring musicians to pick up the sticks (myself included – and no, I haven’t been able to nail them all these years later). Elsewhere, his subtle touches on the likes of Welcome To Paradise and Emenius Sleepus make the Green Day machine as a whole simply untouchable – whether the trio are working in tandem, or allowing each other the spotlight to shine in all the right moments.

In both Dookie and American Idiot, Green Day somehow managed to change the world twice. And sure, American Idiot gave them their first Number One album in America, and eventually spawned a (pretty ace) Broadway musical. And maybe even some day an actual movie. But Dookie not only affected – and will continue to affect – entire generations, it also dramatically changed the trajectory of alternative rock in the wake of Kurt Cobain’s death during its early years (my challenger Ian Winwood has just written a really amazing book about that, which tells this story better than I ever could).