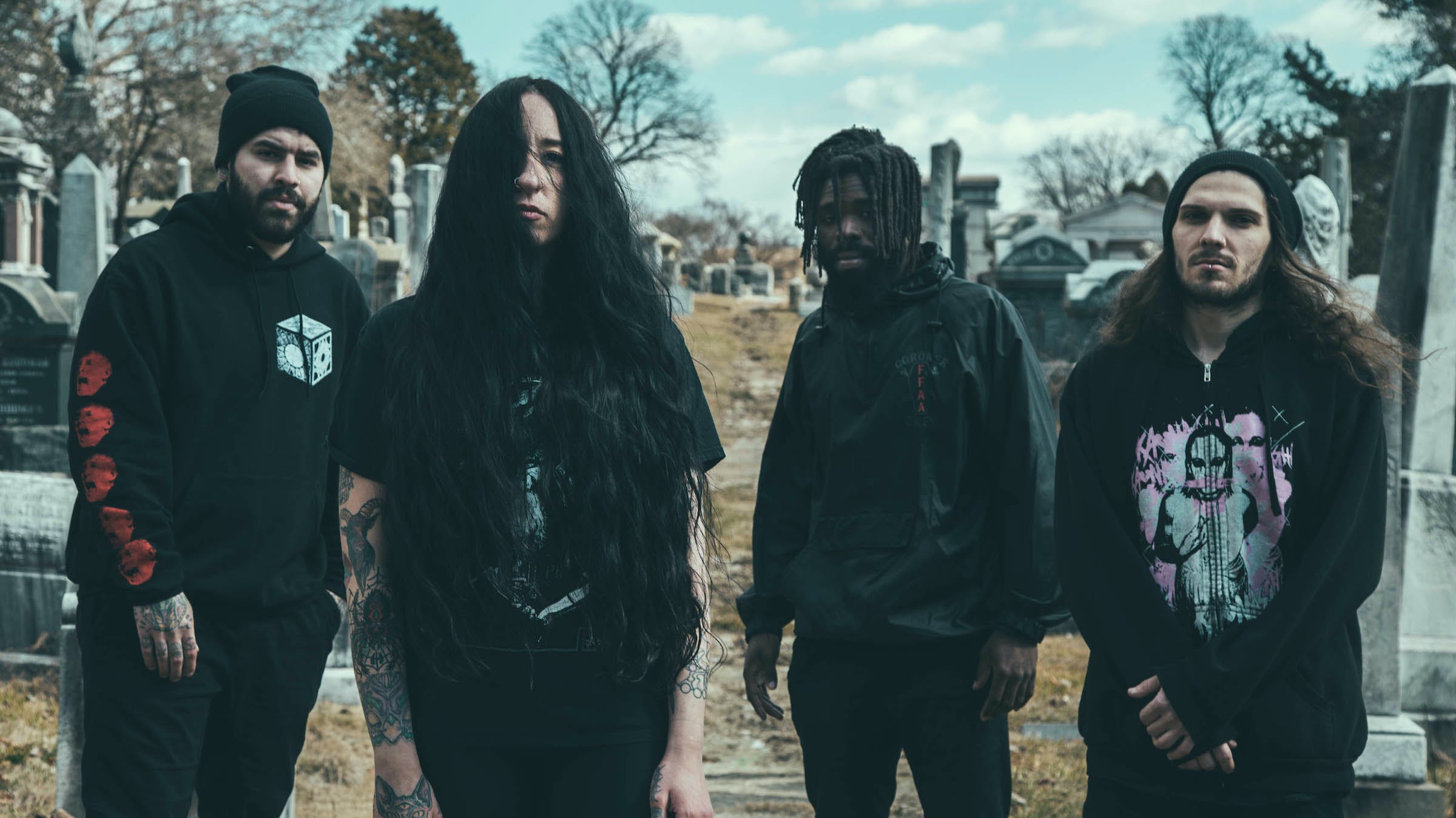 It's unsurprising that The Machinist hail from New York City. The death-metal quartet play the kind of pounding, no-nonsense death metal that comes from being surrounded by a billion tons of concrete and glass at all times. At the same time, the band also employs an emotional weight that speaks to all the joy, rage, despair, and confusion that comes off of the sheer amount of humanity contained in the Big Apple.

The video for the band's new track The Sound Of Shame off of their upcoming album Confidimus In Morte perfectly walks that line between physicality and mental agony. On the one hand, it's full of the kind of bloody torture death metal fans love -- screaming, twitching bodies with their eyes sew shut, namely. But it's also freakish and psychologically jarring enough to make one wonder if its a real scene of horror, or just the fantasy of a broken mind.

We spoke to frontwoman Amanda Gjelaj about the video, the band's formation, and coming from the city that never sleeps soundly.

What was making the video for The Sound Of Shame like? You're not stranger to bloody videos, but this one is especially terrifying.

It was really fun. It was definitely not as hard as our first video shoot for sure. This video is directed by the same director, and has the same special effects artist. Anthony Simone, the director, was my victim in the first one, and he has a special camera he straps to his chest via a harness. Gore-wise, I’m not pulling out anyone’s intestines this time, but it’s bloody. It’s fun.

When The Machinist formed, did you know how you wanted to sound, or did your distinct approach develop over time?

It’s definitely something that has evolved over time. It started off where we didn’t know what we were doing. We started with kind of a deathcore sound, and then we released the self-titled EP. Now, with the new album, it’s a totally different sound. We all matured as musicians. And that’s how we’re going to roll with it -- we’re all going to push ourselves to do more and more, and try to sound better than we did in the past.

Recording the new album, did you ever surprise yourself? Was there anything you experienced where you thought, 'I didn't know we had it in us?'

This might sound really silly, but: our structure. We have way more structure in our music, and structure is amazing. When you have a chorus, a bridge, verse one and two. Our previous EP was, like, just, some breakdowns, maybe a chorus here and there, but there was no structure. With this album, the title translates into ‘In Death We Trust’, and we really focused a lot of gloom, darkness, death -- a lot of themes. That, and my vocals. I really pushed myself to do something different.

What are you most excited for fans to hear on the new album?

In general, I’m really excited for people’s reactions. Like, reactions to lyrical content, especially, because I think a lot of people can relate to what I’m pouring out personally. There’s a lot of emotion, and struggling with feeling sad all the time, or when terrible things happen to you, whether it be sexual abuse or when someone is a racist, whatever it is...I want people who’ve gone through shit to hear our music and think, ‘Wow, I can totally relate to this.’

Along those lines, as a racially-diverse band with a female lead singer, do you guys ever encounter resistance or bigotry?

We have had our experiences. We played a show once where I was standing outside with some girl, and a group of guys came up and yelled, ‘Women don’t belong in this, you guys are pussy as far as I can see.’ It was the first time someone actually made me feel like, ‘Wow, is this a hundred years ago? They’re talking to me like I’m not a human being. Because I’m a woman, I’m not allowed to be in this show or play in this band?’ And people will sometimes give us looks when we walk into a show. But overall, our fans don’t tolerate that kind of stuff. We don’t have to fight anybody. We’ll get messages from people online, but those’re just keyboard warriors talking trash. For the most part, people who come out to see us are just there for the music. It is what it is -- it’s always going to happen. We have a lot more support than hate.

How does being from New York inform your music?

Well, we are all very proud to be from New York. We went out on tour with our friends from North Caroline, and we’re yelling, ‘Deadass’ and ‘Word,’ and they’re like, ‘What are you even saying?’ Meeting us as a group, we’re super New York. I’m not sure how it influences our music exactly--maybe that we’re outspoken, and we don’t care what people think.

Check out the video for The Sound Of Shame below:

The Machinist's Confidimus In Morte comes out Friday, April 12th, via Prosthetic Records, and is available for preorder now.

From DMing DJ Lethal to dumping someone and buying a PS4, Lauran Hibberd tells the stories behind every song on her debut album, Garageband Superstar.