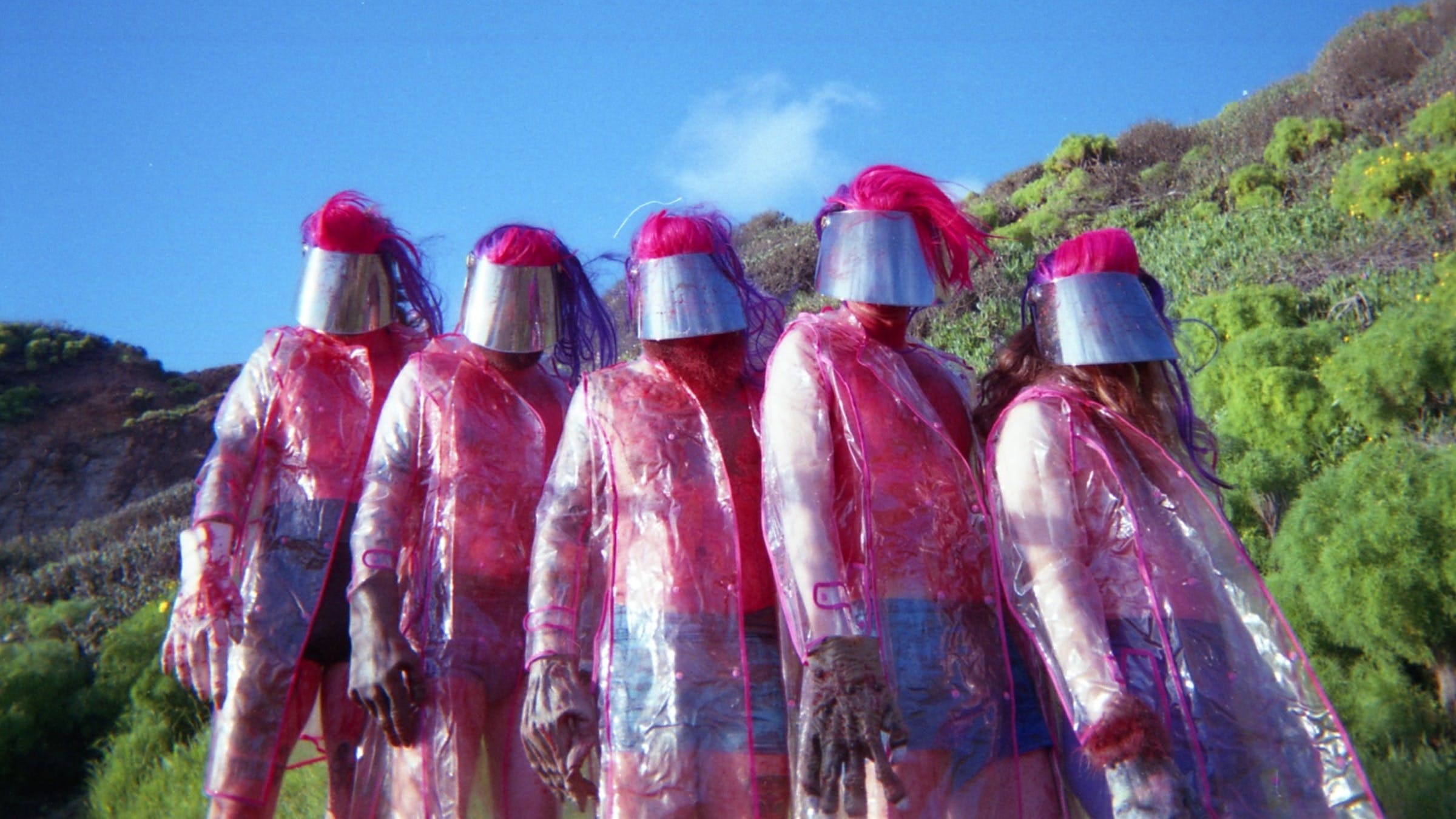 In both their professional and musical careers, the Manx have accomplished what so many punks only dream of: they live in a cartoon. By day, members of the LA-based quintet work as designers and animators for networks like Adult Swim, Nickelodeon, and Cartoon Network; by night, they immerse themselves in screwball punk rock adventures overflowing with all the brightly-colored oddity of acts like the Aquabats and the Residents. The result is a project that’s equal parts skate-thrash band and art collective, making hilarious noise in an unhinged world of creepy crawlers, space adventures, and greasy, grimy gopher guts.

Above: The Manx emerge from the sea after laying their eggs.

Hateful Goo, the video for the first single from the band’s upcoming new album Malibu Slime, feels like a mainlined injection of all things the Manx. Directed by drummer Max Winston, it tells the saga of your average floppy orange muppet guy -- voiced by none other than Justin Roiland, co-creator of Rick and Morty and voice actor behind the show's titular characters -- going to play his favorite arcade game. However, as is the way of things, a blast of evil black goo pulls him inside the console, and soon he’s immersed in a hallucinatory world of hateful goo-filled fighters.

We reached out to the the Manx in a vague attempt to figure out what the fuck is going on here.

What is the origin story of the Manx? How did this band come together?

The short story is: we started the Manx in order to do something much simpler than any of our past projects. We came together via our mutual infatuations with insect larva and bad tastes in music to create something unique that none of us had ever played before. Prehistory will tell you that the Manx once sailed the open seas and played folk-punk at parks, forests, and in abandoned houses -- and that's all true. When we had gotten all the screaming about ogres, crawdads, and other outdoorsy shit out of our systems, we began to naturally morph the Manx into this gross bastardization of basically everything we had ever been inspired by.

We created a disgusting stew of hot trash that we named Voyage In Bad Taste and then immediately set out to make our slick and glossy pop album, Malibu Slime. Currently, we've reached our slimiest and shiniest form yet, but we've already got some fresh horrors bubbling up inside of our proverbial "corpse-cannon."

What’s the Manx’s MO? Is there something you're trying to accomplish here, or is this just a big game of Calvinball?

The band is designed for the fruition of dreams. All ideas, no matter how absurd, get sucked in, mangled, massaged, and masticated. If we're lucky, we then get to spit 'em out and stick 'em to the wall. We've got more corpses than we can even fit into our cannon, is the only snag. Too many ideas that we wanna do. So that's one reason we do this band. The other is more visceral: when we're playing shows and we're all gooed down and screaming our heads off, it creates a real release. Nothing feels better than getting into our sparkle shorts and hopping onto the stage for 40 minutes of zany bullshit.

Tell me about Hateful Goo. Where did it come from? How did the goo become hateful?

Hateful Goo is an arcade-style fighting game not unlike Mortal Kombat II or Clayfighter. It's also [banjo player] Tommy [Meehan]'s plasma-banjo amplifier. At this point, we've had so many people add to the lore of Hateful Goo -- from Gregory Jacobsen, who designed the arcade art, to drummer Max Winston, who made this insane music video -- but it started out as a HATE-FILLED JELLY DONUT in one of our previous projects (The Animated Tales of GWAR). It then kind of evolved into the fighting game that we all know and love today. It's the physical manifestation of a boiling hatred that one must conjure in order to properly disembowel and flay their opponent. The shit is infectious, so even if you ARE careful with it, if you play the game...that's it. You're getting sucked into the machine and turned into a fucking GOO DUDE...

How was working with Justin Roiland? Did you have to explain the video's concept to him, or was he down for whatever?

Myke [Chilian, accordion player,] and Justin go waaaaay back and have known each other forever. Myke actually did the character design, etc., on the pilot episode of Rick and Morty. Tommy also got to work on the first season of Rick and Morty several years back, so when we approached Justin with the idea of doing a voice, he was super down. We had the concept planned out and scripted, but in true Justin Roiland fashion, he went way off the rails with some of the funniest shit ever -- so we've also got a ton of insane shit which we'll create a way to release in the near future.

Behold the video for Hateful Goo below:

Check out the cover art for the Manx’s Malibu Slime, created by renowned photographer Parker Day:

The Manx’s Malibu Slime comes out Friday, July 12th, via Sweatband Records, and can be pre-ordered via their Bandcamp.

The band are playing on Saturday, July 20th, at the Bootleg in Los Angeles, so catch them live for goo-filled hijinks galore.