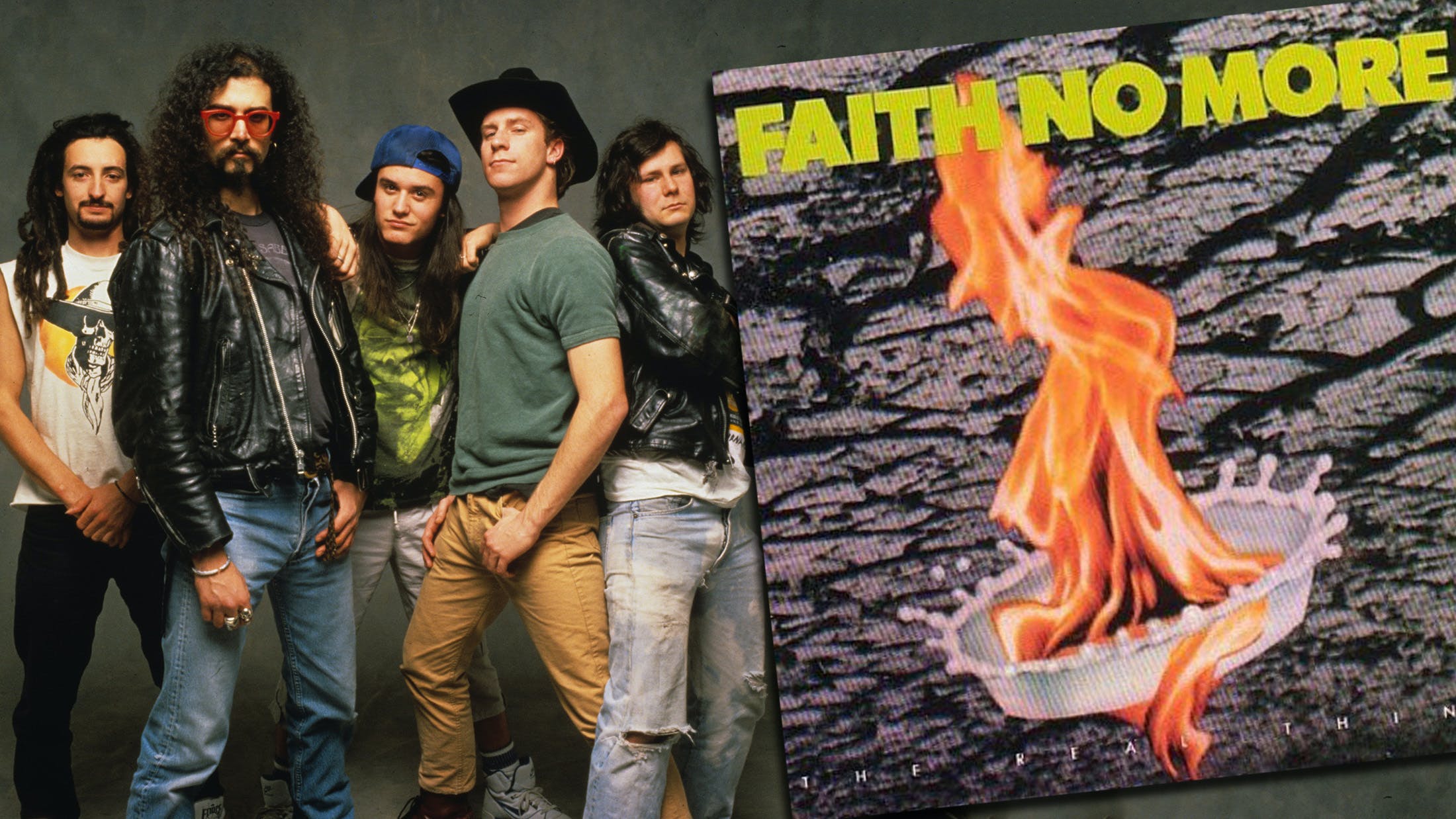 In these days of genre-blurring artists and playlists, it can be difficult to comprehend just how radical Faith No More were when they released breakout album The Real Thing in 1989. Nirvana are generally credited (or blamed) for the death of ’80s hair metal but Faith No More certainly played their part in making rock music a more freeform and twisted playground.

A version of the band had formed as early as 1979, but they struggled to find a vocalist, trying out a succession of hopefuls (including a pre-fame Courtney Love) before finally settling on Chuck Mosley. Chuck was a reckless ball of energy onstage and, while he was hardly a technically gifted singer, his roughshod delivery added a raw punk edge to the band. He also clashed with the other members however, and his antics began to be seen as a liability. There were altercations and even a reported punch-up onstage between the singer and bassist Billy Gould.

After two albums and too much time spent together in a crappy van, Chuck was booted from the band, leaving Faith No More in limbo. “When we kicked out Chuck we hadn’t written one new song for [The Real Thing], we had no idea what we were gonna do, we’d toured the last album for two years and I personally thought we were all used up and dried out,” Billy told Kerrang! in 1990.

Rather than letting their at-the-time cult act momentum disintegrate, though, the remaining members of the band got to work on writing their third album without a vocalist. That missing part of the puzzle would soon arrive in the form of the mercurial Mike Patton. The 20-year-old singer was still a student at the time, but gave FNM a demo of his quirky, experimental rock band Mr. Bungle. “I thought he’d like it, then they just gave me a call one day and said, ‘Let’s jam,’” he told K! at the time. “It was quite casual. It felt comfortable for them and for me too.”

Mike’s powerful, versatile and acrobatic vocals brought a whole new dimension to the band. In a 2019 Q&A with fan site Faith No More Followers, Billy recalled the first time he heard one of their songs played back with his vocals. “The first song I heard with Mike P was [From] Out Of Nowhere,” he said. “We had a rehearsal recording and he came over to my house to work on his vocal ideas to a few songs. I hadn’t heard his voice recorded before, and within 30 seconds of hearing his contribution, it almost freaked me out on how well it worked.”

Not that it was always easy to get the best out of the new vocalist at that point. Producer Matt Wallace, who had been with the band almost from the start, described working with Mike as “like trying to ride a bull or a racing motorcycle”. Matt had recorded FNM’s first two albums and he even shared a loft space with the five members when they were working on ’85 debut We Care A Lot. He certainly has a claim to be described as the band’s sixth man and recognised the talent they’d found. “He and I had disagreements about ‘tone’ and the fact that we weren’t able to capture the full range of his voice,” he told Faith No More Followers. “But, I don’t believe that I’ve ever worked with anyone who was built to sing like Patton because he made everything sound and appear to be effortless. But, if you really listen, he’s doing some amazing singing, phrasing, and lyric and melody writing.”

The new singer had come in too late to contribute to the music on The Real Thing. That was already done and the band were resistant even to suggestions on tweaking the arrangements. It’s perhaps telling that when Mike did become a full creative partner on follow-up Angel Dust, the band created a much heavier and far more awkward beast. “I don’t think people will like this record at all,” he told us at the time… but that’s a story for another day.

People did like The Real Thing. To coin a phrase, they cared a lot. They liked the way it mixed metal, punk, funk, prog and half a dozen other elements. They liked the often twisted, dark, surreal and humorous lyrics – which did come direct from the often twisted, dark, surreal and humorous mind of Mike Patton. “Ugly things,” he replied when Kerrang! asked him what inspired him lyrically. “Orgasms, nausea, frustration, dandruff and carving up the wife! Underwater Love was basically about murdering someone you love.” People liked The Real Thing a lot, but it was a slow start and it was the UK that embraced the band first.

After a show in Newcastle on their UK tour in support of the album, Mike pondered why that might be. “Tonight at the show we were sitting in the dressing room afterwards saying, ‘Why do these people like us?’ he told us. “It’s a good question. We seem to be getting a lot of good press and all these rock stars like us.” This was true but not every rock star liked them, it seemed. Anthony Kiedis accused Mike of ‘stealing his style’ in the video for Epic, telling K!: "My drummer says he's gonna kidnap [Mike], shave his hair off and cut off one of his feet, just so he'll be forced to find a style of his own.”

Mike initially refused to respond but eventually told us: “Reading that article gave me a good laugh – it sounded like old Anthony felt a little threatened, I dunno. If he wants to give me press instead of his band, his girlfriend or whatever, that's fine by me.”

Inter-band feuds aside, things were starting to look up for Faith No More. In the UK they were selling out venues like the Hammersmith Apollo and in the U.S. the arty, surreal video for Epic – which featured a flopping fish as well as a wet Mike dancing in a way that may or may not be similar to Mr. Kiedis – started to propel them up the album charts.

By the end of the cycle, Faith No More were global superstars. They didn’t exactly embrace fame and fortune wholeheartedly, but the world of rock and metal would never feel quite as straitjacketed or constrained as it had before their success.