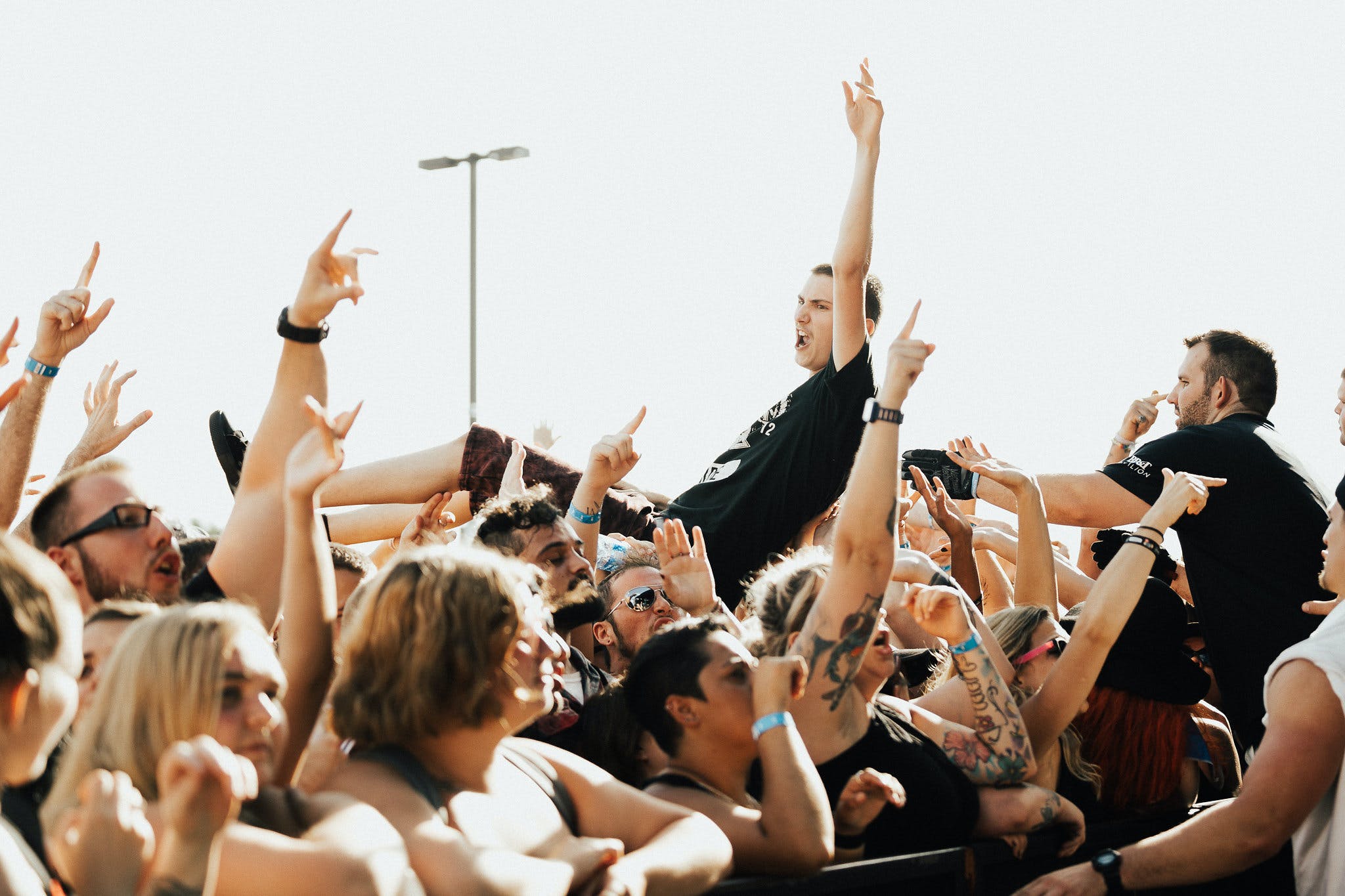 Kevin Lyman sits at the edge of a dock at Jones Beach on Long Island, New York. The Northwell Health Amphitheater towers overhead, housing the press room and the makeshift mess hall for all of the artists on the last ever cross-country Vans Warped Tour. But Lyman keeps himself at a distance from all that, preferring to keep company with the fish he’s trying to wrangle from the water. Surrounded by sun and floral-patterned beach chairs, the Warped founder looks like the picture of retirement. He is perhaps the most peaceful person on the island, even though the dozens of thousands of people that have gathered here are heartbroken.

Each band’s set is punctuated by the phrase, “last ever Warped Tour,” and it’s annoyingly gut-wrenching. Once the crowd does finally get blissfully lost in the music, the sting of reality returns to remind them that the festival will only last for another few hours.

“Say goodbye to your childhood,” Senses Fail frontman Buddy Nielsen says to his fans. And he’s not being melodramatic, either – bands like Senses Fail and their fanbase literally grew up on Warped Tour.

Back in the press room, Silverstein vocalist Shane Told can be overheard grieving his band’s last day playing the tour. “My bandmates and I have been crying all day,” he says. “It’s really emotional.”

Some of the bands on the bill, like UK’s Trash Boat, find themselves in the odd position of participating in their first and last Warped Tour. Vocalist Tobi Duncan always admired Warped from afar, but now that he’s finally a part of one, he understands the full scope of its significance. “It’s just been very humbling,” Tobi begins. “We’ve learned a lot. It’s hard work, but it’s worth it because you get to be part of something existential – it’s just bigger than you.” The band’s time on American soil has been electric thus far, despite having gone through four tour buses and a seemingly endless string of cabs from Utah to Colorado. “Stuff like that has been testing us all tour,” he continues, “but it would take a lot more than that to sour this tour for us.”

Kevin Lyman, however, is past that stage in his life. “It’s time to move on,” he says as he reels in his line and tosses it out again. After 24 years of running the festival, the punk icon is looking forward to his new role as a professor at the University of Southern California’s Thornton School of Music. His new adventure is just on the horizon, but for the rest of us, the horizon appears blank. Where will we go if not Warped Tour? There is nothing like it and there is nothing set to take its place. The modern punk rocker’s national holiday is being cancelled; our yearly congregation dissolved. Who and what will fill the void?

Though the answers to those questions are not yet known, a much-needed piece of wisdom comes from an unlikely source: the infamous Falling In Reverse frontman, Ronnie Radke. As he and his bandmates pump up to play their new singles, Losing My Life and Losing My Mind, Ronnie prefaces by saying, “You need to change to survive. The ones who don’t change are the ones that die out.” It’s midway through the day and his summation of the band’s new material feels timely and almost cosmic. Even though America isn’t ready to say farewell to Warped Tour, it’s the punk scene’s time to witness and embrace a historic change.

For her part, Shiragirl (the artist who stormed Warped with her band and her own stage 14 years ago, despite not being asked to play) firmly believes that the spirit of the tour won’t end, but transform. “I think there is gonna be a void,” she surmises, “but Kevin is sort of waiting to see what’s next [and] who’s going to pick up the slack.” Shiragirl feels that despite the curtain call, there is something new and creative to be done. (She plays with the idea of developing a new, feminist-oriented offshoot of the legendary summer fest.) But when it comes to any future festivals, Kevin will always be the one to consult. “I always say I want to be Kevin Lyman when I grow up,” she says, admitting she lives by the mantra “What Would Kevin Do?” “Not just doing a cool thing, but doing good in the world.”

While he has worked – and continues to work – day and night for his philanthropic ventures (e.g. FEND: Full Energy No Drugs opioid addiction initiative), one wonders if Kevin Lyman truly knows the degree to which he has affected this music culture and every individual that has been part of it. For every one of us that has been spin-kicked in the face, surfed the crowds, started new careers, and deepened old friendships as the sun burned us in those many parking lots across the nation, this is the hardest breakup of our lives.

As the sun comes down on Jones Beach, and Motionless In White croon out their last song, Eternally Yours, it feels as if they are saying the farewell that no-one else can muster. So to borrow their words, for now we bury our bones even though we’re not ready to. Maybe when the next sun rises, we’ll see a pleasant horizon from the shore.