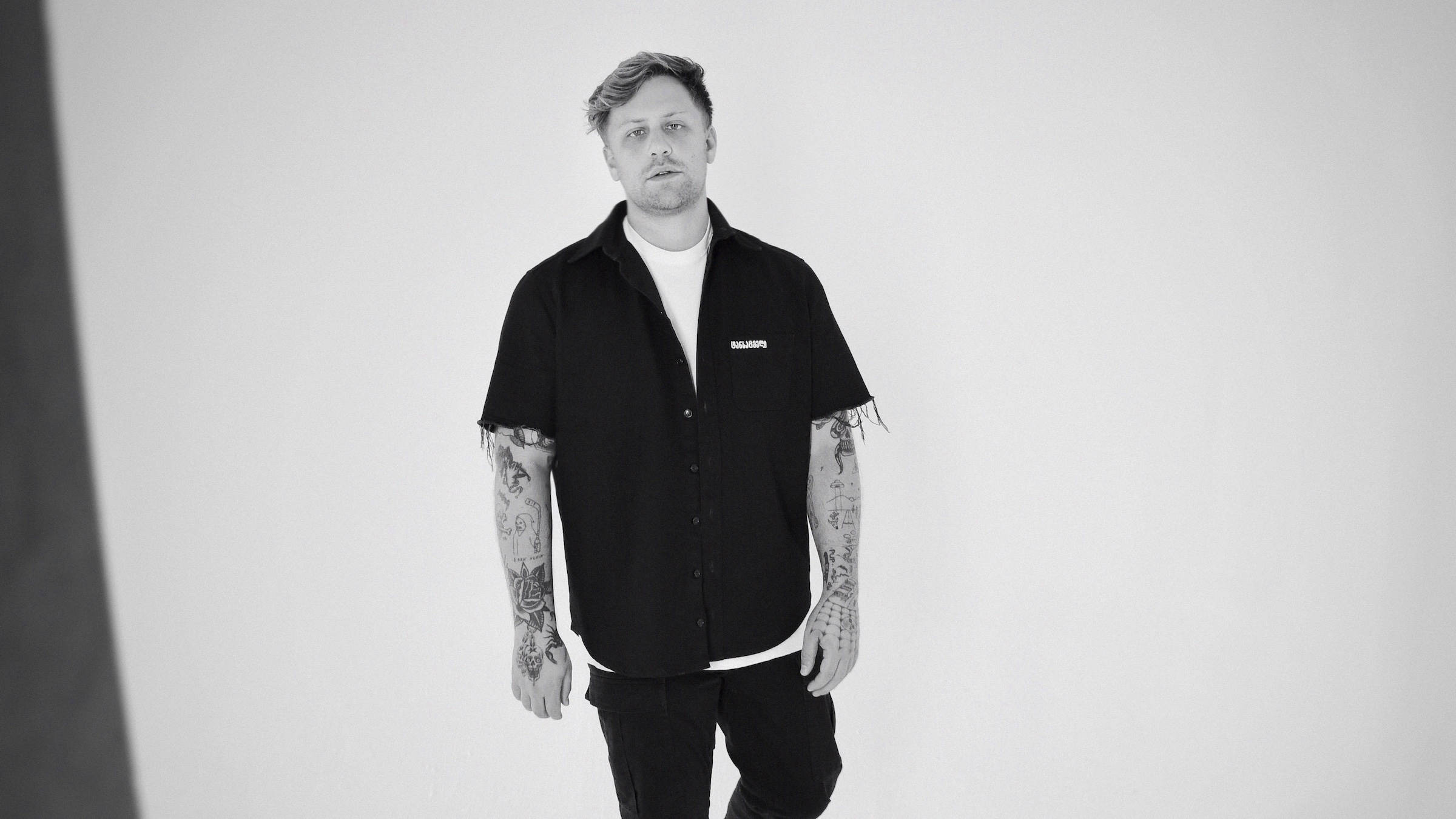 Historically, electronic music and rock have been at odds with each other, not just in terms of their inherently different sounds, but also when it comes to production technique, writing and recording methods. and lyrical approach. Yet as those genres and technology have evolved, there’s been an increasing amount of crossover between the two, as bands like Bring Me The Horizon, Enter Shikari, Asking Alexandria and Crossfaith fuse them together to create a sound that sits both within and without those two distinct styles. But while those artists often approach electronica from a rock lens, the musician taking on rock from the electronic side is most notably Kayzo.

Born Hayden Capuozzo, Kayzo is an LA-based DJ and producer who has not only remixed rock bands like Papa Roach, but has also worked with a host of unlikely acts to create songs that transcend -- or perhaps even redefine -- the boundaries of genre. Earlier this month, Kayzo released his second record, Unleashed, which features collaborations with bands (or members of bands) including All Time Low, Of Mice & Men, Underøath, Our Last Night and more. It also features a song he made with Kyle Pavone, which is the last recording ever made by the late We Came As Romans vocalist. Here, he explains how these two distinct styles are actually not so different, what it was like working with Kyle, and what the future holds for rock and electronica as awesome, if reluctant, bedfellows.

Was this level of collaboration always the plan for Unleashed, or was it something that grew over time as you met these musicians and got to know them?

Kayzo: The goal was always, and still is, to try and collaborate with these bands. And if not the entire band, at least the singers and guitar players -- whoever can be available for the session. It was never ‘Okay, I’m gonna hit these bands up,’ or ‘This is what I want’ in terms of a package of artists. But over the past year, it organically came together. After I did the remix for Last Resort with Papa Roach and worked with Underøath, it was more like a snowball effect. Once one band got in the studio with me, then the next one was open to it, and then the next one. Sometimes, depending on the band or the artist, they may be reluctant to get in the studio with an electronic artist, but the more and more I worked with bands, the more and more they were open to the idea of working creatively in the studio.

Was there anyone you worked with who was a little reluctant at first, but who you then had a really good experience with?

Every band that I ended up working with was super open to the idea of working creatively with an electronic artist. Bands like Underøath, Blessthefall, Our Last Night, Of Mice & Men -- a lot of these bands have had hints of electronic work in their music. I think being able to have bands like Bring Me The Horizon, with their new album amo fusing electronic with live instrumentation, opens up a new door and gives other bands at least a question to ask themselves: Can we work outside of the traditional rock session with ourselves? Can we collaborate with someone from a completely different world?

In your opinion, what is it about the merging of these two styles of music that is especially powerful?

There was a surprising similarity with the chord progression and song arrangement that I never really understood until I got into writing electronic music in the production world. When I started to see similarities between the two worlds, it was kind of subtle and something you didn’t get from first listen, and it was really inspiring. Just having those similarities pop up prior to actually taking the risk creatively was when I started to realized there was this untapped market that not many people had given a chance yet. I figured, if not now, then when? If no one’s gonna do it, then I guess I can be one of those guys that tries to help pave the way from the electronic side, to try to open a new door creatively. There were a lot of what ifs, but also a lot of what can bes.

One of the collaborations features vocals by late We Came As Romans vocalist Kyle Pavone. What was your experience with Kyle?

That one obviously is really special for me and Kyle’s family and everyone involved. I would say we linked up over the internet probably a year before his passing. I was always a big fan of We Came As Romans prior to that. When I got in contact with him, we kind of became friends first. I’m not really a big fan of meeting someone that I look up to and immediately starting to talk about working on music, so I wanted to be able to create a friendship, to know Kyle prior to working with him. When the idea came to work, Kyle was instantly on board. Unfortunately, we weren’t able to link up in LA and record in person, but I was able to work on the instrumental of the song with the guys from [dance duo] ARMNHMR and we instantly thought Kyle was the perfect fit for it.

READ THIS: Remembering We Came As Romans' Kyle Pavone, one year later

We went through probably four different versions lyrically, and we took some time to go over what we wanted to talk about, what we wanted the song to mean. We really wanted to find a way to make this really important, and that’s why it took so long -- the song is almost two and a half years old because it went through many lyrical and production revisions. It was so refreshing to work with someone who was so passionate creatively -- I thought I was passionate about always working, but then when I met Kyle, I was like, ‘Wow, there’s someone as passionate, if not more, about working 24/7 in the studio on their art.’ And I think that comes to show in the song with his writing and his singing. The song speaks for itself in that sense. There’s something about it lyrically that I think will live on forever. All of his songs, whether it’s We Came As Romans or anything he did outside of it, will have such an impact on people forever. This song was just one of those special moments that I look back on now and I’m so grateful that I got to work with him on it.

Obviously, when that happened, the song was the last of my worries. Supporting him, his family, his loved ones, his friends, the band, and mourning and dealing with such an unexpected loss. The song went on hold for quite a while, obviously, but as time started to pass, Kyle’s brother and dad reached out to me. They had heard about the song from either Kyle or the band at one point, so they reached out to me, firstly, to just listen to the song, to be able hear one of Kyle’s last songs. A little more time passed, and then the idea came from them and myself and my team to maybe release the song to honor Kyle’s memory. It’s giving people a chance to be with Kyle again, so we’re all very happy that it was able to come out on Kyle’s behalf and let the world hear his voice again. His music will live on and this will live on forever. It’s really incredible.

Are there other artists you want to work with that you have in your sights?

Most definitely. Aside from this project coming out, I’ve already got another 15 to 16 records that are either done or in the demo phase, that could be worked on with other bands. I’ve already started talking to a few bands. I’m actually going into with Atreyu shortly, and I’ve talked to Tyler Carter from Issues, Tony Pizzuti from The Word Alive, I Prevail, Wage War -- you name it. We’re all going to eventually work on some sort of record together and it’s going to continue to evolve.

But if I could work with a band that I haven’t had the chance to work with yet, it’s got to be Bring Me The Horizon. They’re one of my most influential bands that I know and listen to and have listened to forever now. I think what’s so important with that band is that they’re willing to take chances from the rock side. A band like that and someone like myself are on such opposite spectrums for a lot of people, but I think one day hopefully we’ll be able to meet in the middle, knock on the same door, and just kind of see what we could do and maybe create something. That would be incredible.

Kayzo's Unleashed is out now on Ultra Records. Listen to it below.

The new Kayzo album will feature guest vocals by Kyle Pavone, the late frontman of metalcore act We Came As Romans.