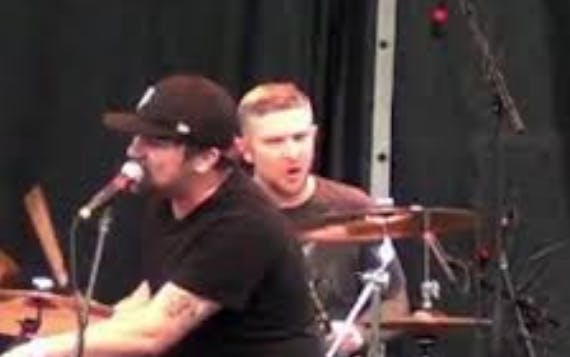 Billy Johnson, former drummer for Reggie And The Full Effect, died on Tuesday night. As well as playing with Reggie for a decade, Johnson was a key figure in the Kansas City music scene, and had played with many different bands in the area.

Johnson had to leave the band in 2014 after a shoulder surgery left him unable to play without pain.

The cause of death is currently unknown.

I don’t even know how to write this. This evening I got the news that last night Billy Johnson passed away. Billy was a huge part of reggie and the full effect for a very long time. He was the drummer on last stop crappy town and no country for old musicians. Beside being with me on stage from the “songs to not get married to” tour, all the way until the last shows of the no country tour. I’ve known him for over 20 years. He snuck me and jes from coalesce into our first bar in 1996 to watch rocket fuel is the key play. He was one of the most amazing people on planet earth and one of my favorite people to be around.

Besides being an amazing drummer he was also an amazing friend. He was the guy you could always count on, the guy who when things didn’t work figured out a way and made them work. Always in a great mood, always ready for an adventure with me. And believe me, billy and I have had some amazing adventures. My heart goes out to his wife and his family and also to the Kansas City music scene. Without billy I can promise you that reggie wouldn’t be what it is today. And a lot of the KC music scene wouldn’t be the same. ( he played in more bands than me!) He was such a big part of my life and career. I will miss him soooooo much. Billy thank you for everything! I love you. I hope wherever you are there’s a party and then an after party at your place then another afterparty at my place. Then metal marks house....this is a photo from riot fest, it was the first reggie show back after the hiatus.

Have a listen to Songs Not To Get Married To here:

rest in peaceReggie And The Full Effect