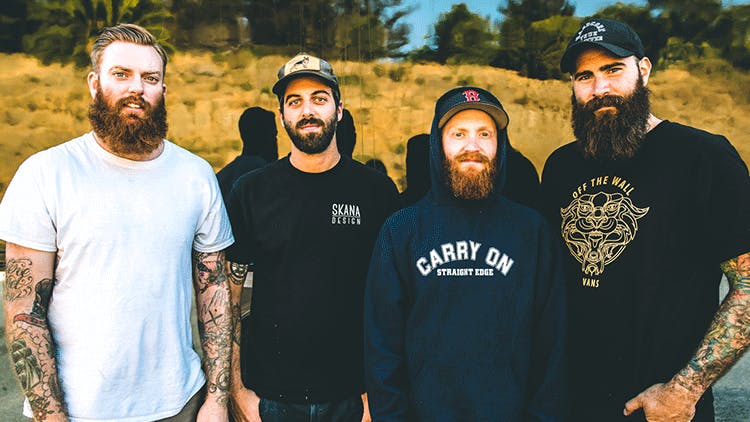 It's been a hot second since the world has heard from pop-punkers Four Year Strong, but that's forgivable seeing as the band have been hard at work writing and recording their fifth studio album Brain Pain. Now, the Worcester, Massachusetts-based quartet have released a new music video for the track Learn To Love The Lie, which you can watch below.

The beauty of the video is its simplicity -- between performance shots, the footage features a young couple on an overcast day, wandering around a harbor neighborhood. Sometimes the couple drinks, sometimes they cry, but mostly they just stare into the clouds and look like their hearts are breaking. The vibe of the video fits the title of the track; both suggest the basic misery of trying to swallow your sadness, even when that begins to prove impossible.

Check out Four Year Strong's Learn To Love The Lie below:

Brain Pain comes out February 28 on Pure Noise Records, and is available for pre-order.

READ THIS: Unify Gathering 2018 – Day one: The ultimate gallery

That Four Year Strong are still kicking is impressive, given that their 2011 album In Some Way, Shape Or Form nearly broke their careers. The band took a strange sidestep with their third full-length. Chucking their synth player and slowing things down, the four-piece settled into their plaid and grunge roots, bouncy melodies replaced instead with four-chord, Dave Grohl-aping storytelling. The result was far from ideal, with a collective yawn greeting their new Foo Fighters-lite sound, and the band losing the ground they paved to the likes of Chunk! No, Captain Chunk and their peers in A Day To Remember.

It’s fair to say the radio-rock gamble didn’t quite pay off, with critical reception middling at best. Four Year Strong took a brief hiatus post-’In Some Way, Shape Or Form’ to regroup, before returning to their bread-and-butter easycore sound on the 2014 ‘Go Down In History’ EP and its self-titled full-length follow-up.

READ THIS: Mike Shinoda – The 16 songs that are rocking my world right now

The Untold Story Four Year Strong And Their Secret Break-Up

Four Year Strong's new LP Brain Pain is the result of an identity crisis – not the first they’ve weathered during 20 years at the pop-punk coalface. This time, however, they’re ready to own the private dramas that once drove them apart…