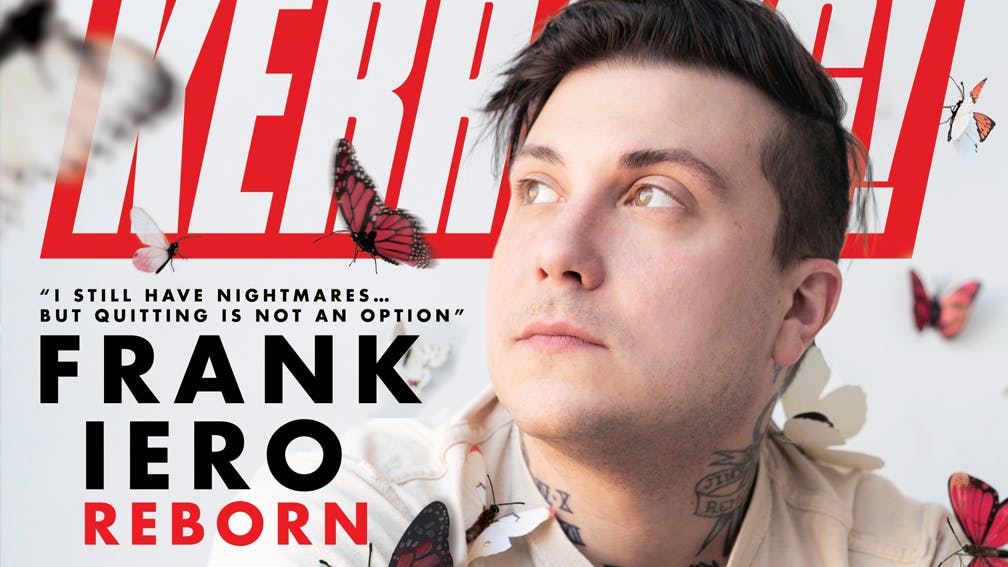 It has now been two and a half years since the day that everything changed. In the aftermath of a close-call road accident in Australia, Frank Iero’s life has been a whirlwind of pain, confusion, rebuilding and rebirth. With new album Barriers on the horizon, and new band The Future Violents by his side, the skies ahead look clearer. But his head remains a tangled mess of doubts, fears and what ifs…

Plus, you know what your wall is missing? A gimp with no eyes. And, ever the helpful man, Frank has gifted you one right here in this issue. Lovely.

Elsewhere in the mag: Neck Deep frontman Ben Barlow gives us the lowdown on that blink-182 tour and the future; Baroness vocalist and guitarist John Dyer Baizley delves deep into his past to chart the soundtrack to a life of triumph and tribulation; Keith Buckley of The Damned Things and Every Time I Die explains how, um, llama spit is really tough to clean off; FEVER 333 punk legend Jason Aalon Butler talks changing the world and much more in the career-spanning Kerrang! Interview; and we meet the British rock breakout stars of 2019, YONAKA.

In the reviews section, meanwhile, after a 10-year wait, Rammstein return both more bombastic and mysterious than ever, while The Amazons come back bigger, bolder and with more riffs. On the live front, Andy Black hosts an intimate solo evening in New York, Can't Swim leave shit creek behind at their cathartic London return, and riot grrrl trailblazers Bikini Kill return – still awesome, still angry.

All this and more is available in the new issue of Kerrang!, which you can get anywhere in the world through Kerrang.newsstand.co.uk. But for UK residents, it hits the shops on Wednesday, May 15 from all good newsagents.