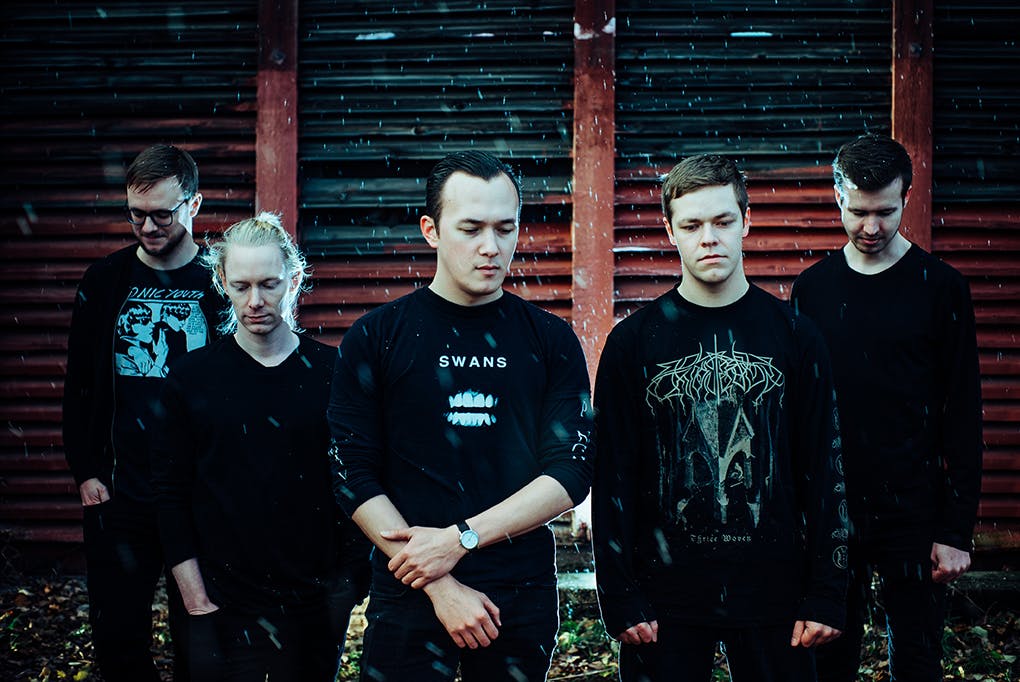 Shoegaze metallers and Kerrang! favourites MØL are reissuing their first two EPs on June 7 through Holy Roar Records. Following the release of their debut album Jord last year, MØL have rapidly become one of the most talked about bands in the underground, thanks in part to their emotionally intense live shows.

But for a band still in their infancy, why have they decided now is the time to re-release their first tracks?

Well, it started as a suggestion by Holy Roar, but we quickly grew fond of the idea," guitarist Frederik Lippert tells Kerrang!. The records were originally released independently and available through Bandcamp, but now it's being released on pink and cream vinyl.

"It was those two EPs that propelled us forward and gave us the opportunity to go further with music than we ever dreamed possible," Frederik continues. "It seems fitting to reissue the EPs now that we are moving forward. It’s sort of a celebration of where we’ve come from and where we are going."

Listen to the I/II compilation below ahead of release, while Frederik discusses their memories of recording and the future of MØL.

For a band so forward-thinking in their music, how does it feel revisiting old material in this way?
Frederik: "Firstly, thank you for considering us 'forward-thinking'. Not sure that we are worthy of that title, but it is definitely one of our goals in our songwriting. Secondly, it feels nostalgic to revisit the material. While it has only been a few years since we made that music, it still feels like forever ago. We are different people now, compared to who we were back then. Actually the band’s line-up was also different – Johan Neve Klejs was on bass and Steffen Nørregaard Rasmussen was on vocals – so it's almost surreal looking back on that time."

What are your fondest memories of making those two records?
Frederik: "Probably the feeling of exploration and discovery; figuring out what kind of music you want to make and why you want to make it. We still get that feeling of 'newness' when we write new songs.

"We recorded almost everything ourselves on the first two EPs; except the drums for II, we recorded them with Jacob Bredahl at his Dead Rat Studios in Aarhus, Denmark. It's easy to romanticise the DIY nature of that recording process, but we also loved recording Jord in a real studio."

What are your favourite tracks from those first EPs?
Frederik: "We still play Rush live, and it’s fun to play, so that would probably be my pick."
Holger Rumph-Frost (bass): "Kathexis! My favourite song before I joined the band. It’s a very well-composed track with a lot of great riffs – it makes for an absolute banger!"
Ken Klejs (drums): "A tough choice between Airy and Sundrowned, but I would probably go with the latter, since it's the very first song we ever wrote for MØL. Still love it."
Nicolai Hansen (guitar): "I’ll go for Kathexis, too. It was an extremely good process writing that track and all the parts flowed very naturally."
Kim Song (vocals): "Rush is an amazingly energetic track – I always enjoy performing this track live, it has so much hardcore energy! It’s an all out mosh track and always gets the crowd riled up just the right way."

How has MØL evolved since those original EPs?
Frederik: "Other than a change of line-up, we’ve definitely become better musicians. Not that we didn’t know how to play our instruments when we recorded the first two EPs, but we’ve accumulated more skills and techniques through repetition and exploration. We think it shows on Jord."

How much do you hate the term blackgaze?
Frederik: "We don’t hate the term. It’s very useful for signifying genre characteristics and aesthetic choices. Like any genre, it has some stereotypes that stick to it like glue no matter how hard you might try to detach from them.

"Personally, we would not describe ourselves as a strictly blackgaze band. Metal or shoegaze seems more fitting, since we are influenced by many different metal genres. So no, we don’t hate the term blackgaze, but we do see some of the potential creative limitations the term might create for bands and artists who only identify as blackgaze."

You’ve been touring non-stop since Jord came out. Are you sick of those songs yet?
Frederik: "Not really. Playing the songs live for people who connect with the songs is one of the reasons why we do this. It might be a cliché, but we really do feel that way about the songs. You might have a bad show once in a while, but that has nothing to do with the songs. They have the same value today as when we played them live for the first time."

Are we going to hear new music soon?
Frederik: "Nothing planned yet, we are currently just working on writing songs. We're trying not to force it, since an organic and patient method usually yields the best results. But no matter the length of the process, we are very excited to be working on new material. It’s a feeling we’ve had ever since we started writing those first two EPs. And we aim to keep it that way."