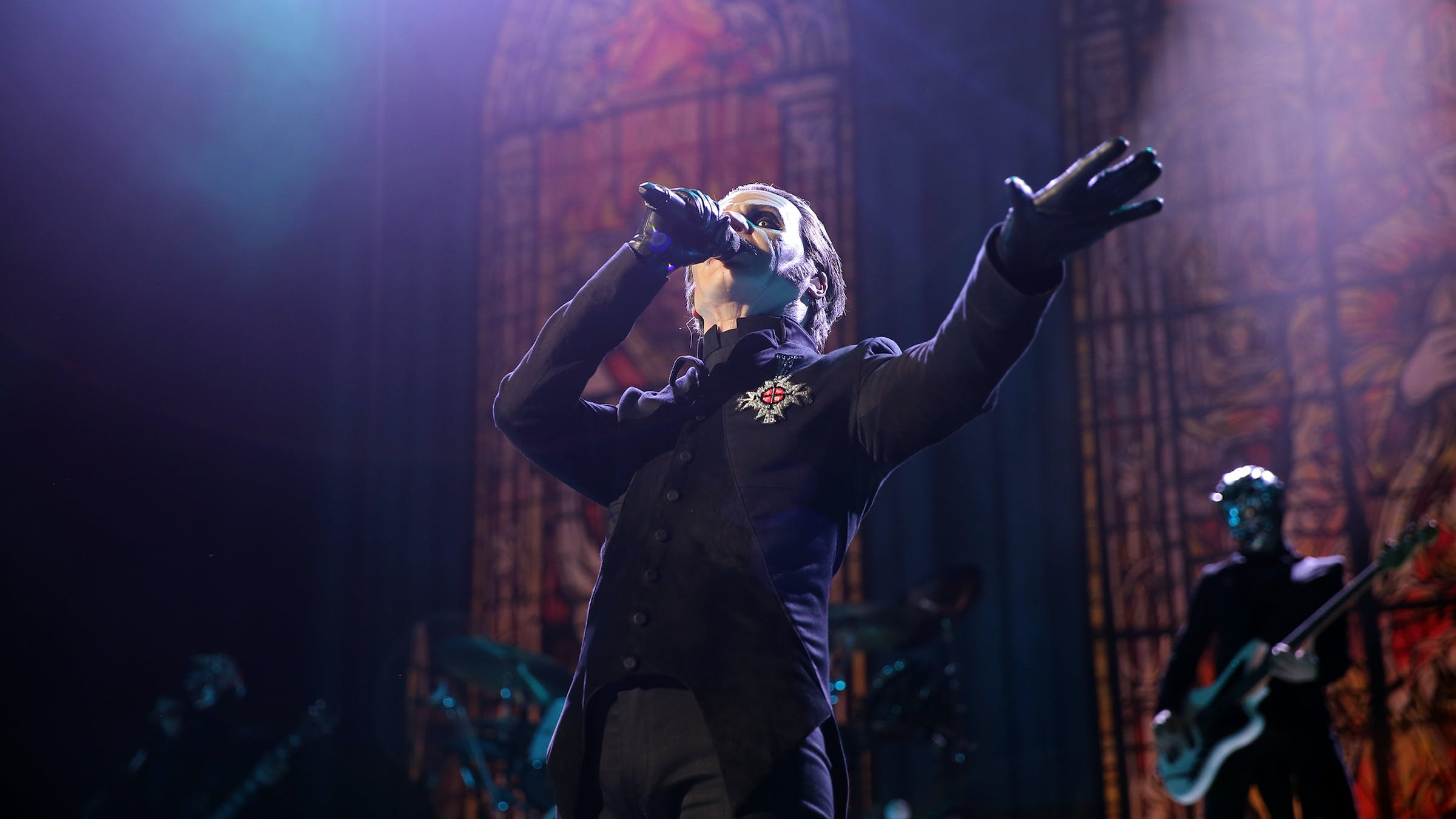 Ghost’s rise to fame has been unlike that of any band in recent heavy metal history. It seems like only yesterday that fans were downloading the Elizabeth demo from some doom metal blog. But this Saturday night, thousands of fans flock into Brooklyn’s Barclays Center arena to see the band play a two-hour solo set, complete with an intermission.

As diehards trundle into the arena and see the band’s massive stage set--a white gothic stone balcony beneath a massive backdrop of stained glass windows depicting the previous Papas in religious rapture – a ripple of excited chatter moves through the crowd. How far this band has come.

The make-up of the audience itself is fascinating – for many, Ghost remain tied to the Scandinavian satanic metal scene. Yet the arena is packed with blue-collar dudes from Long Island and Jersey, who rock their Ghost gear in proud display, to the point where some husky construction worker types even have Ghost hoodies over Ghost tees. Seeing so many typical American folks wearing this many inverted crosses feels initially jarring, but it speaks to the reason that Ghost are making their public spectacle a solo affair rather than bringing on a crew of hungry young opening bands. Tonight’s not about seeing metal, it’s about seeing one show and one show only.

At eight sharp, the lights go down, a classical intro plays, and the crowd begins its excited roar. Then, in a blast of fake smoke and stage lights, the Nameless Ghouls appear and begin to play the band’s latest big single, Rats. Slack-faced frontman Cardinal Copia swans out soon after, and makes sure to call out a reedy, “GOOD EVENING, BROOKLYN!” that both engages the audience and acknowledges the hip borough that made Ghost what it is in New York. The fans respond with pure adulation, and sing the ‘whoas’ in the song’s chorus obediently.

Thus begins a chugging set of mid-paced, catchy love songs about Satan in Europe. The Ghouls get their occasional moments to show off a solo or two, but mostly stomp along obediently. Copia, on the other hand, commands all the attention in the room, twirling his cane and thrusting his crotch with Michael Jacksonian flash. The band touches on the various odd corners of their career, from a performance of early-adopter favorite Ritual to their new instrumental Miasma, which includes a rambunctious sax solo from Papa Nihil.

The intermission feels unnecessary, and like a bit of a momentum killer; fans mull about impatiently, waiting for round two. But the band quickly reappears with renewed gusto, Copia now dressed in a red cardinal’s outfit. The costume changes continue into the second act, with Copia’s many fashionable get-ups doing much of the work bands would normally use pyro and screens to display. The show ends with favorites including the band’s cover of Roky Erickson’s If You Have Ghosts and the NFL favorite Square Hammer, driving home Ghost’s breakthrough ascension from subterranean phenomenon to theatrical darlings of rock at large.

Fan of Ghost? You'll want to be sure to order our massive Christmas issue featuring the band on the cover! Pre-order the 84-page special right now and get it delivered straight to your door, anywhere in the world.