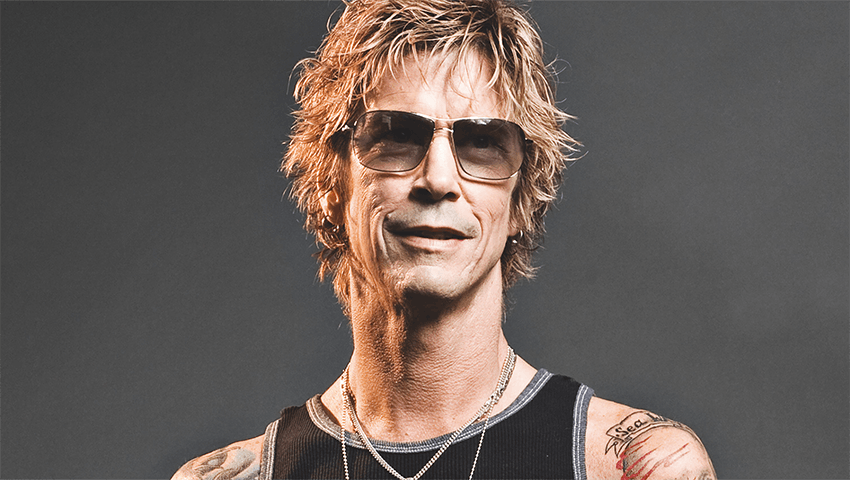 When most people think of that classic Guns N’Roses sound, Duff McKagan’s four-string is probably not the first element they settle on. There are Axl Rose’s vocals of course, alternately sneering, wailing and caressing your sensibilities. Then there’s the way Slash makes his guitar sing. They’re the iconic pair people wanted to see back together, but they also need a bedrock from which to launch their histrionics.

Back when Appetite For Destruction came out, GN'R also had rhythm guitarist Izzy Stradlin cranking out that Rolling Stones groove, and drummer Steven Adler keeping time. And then of course there was the tousle-haired blonde colossus Duff ‘Rose’ McKagan – the ‘Rose’ presumably there so the band, who briefly included Tracii Guns on guitar, could use the plural and weren’t Guns N’ A Rose.

In some bands the bassist is simply the lanky dude who lurks side-stage, doesn’t speak in interviews and does something you suspect is important, but can’t quite put your finger on. Metallica went one step further on …And Justice For All by expunging all traces of Jason Newsted’s contributions.

Duff was not only visible and audible, he was essential. Picture, if you will, the slinky intro to Rocket Queen or It’s So Easy. Or later bass-heavy beasts like You Could Be Mine and Coma. Even when it wasn’t in your face like Steve Harris’s striped Spandex strides at the front row of an Iron Maiden concert, it was thrumming away with an insistent, sexual pulse. If you’re not sure how important it is, check one of the many GN’R isolated-track vids on YouTube to see how entirely wrong they sound without that bass.

Guns N'Roses, You Could Be Mine

As well as his playing skills, Duff also brought his own musical influences to the band. Guns N’Roses were infamously labelled ‘the most dangerous band in the world’ in an introductory Kerrang! cover feature and Duff brought a streetwise edge, having served time in a series of short-lived punk and hardcore bands, including one called The Fartz.

His rough and ready vocals were perfectly suited to punk rock, and on the GN'R’s 1993 covers album The Spaghetti Incident, he stepped up to the mic for a number of leads, including New Rose by The Damned and The Misfits’ Attitude, which also became a Guns live favourite. Around the same time, Duff also released his first solo album, and while it was patchier than a Bloodstock battle vest, it did showcase his multi-instrumental talent and his willingness to try new things.

With GN'R largely inactive in the mid-’90s Duff McKagan – a man whose bank balance at that point could have kept him sipping poolside cocktails without ever lifting another plectrum – was driven to start a supergroup called the Neurotic Outsiders, with the oddball pairing of Steve Jones of the Sex Pistols and John Taylor of Duran Duran. Having finally jumped ship from Guns N’Roses in 1997 – the last of the Appetite gang to do so – he resurrected some former outfits and recorded a second solo album that ended up getting shelved. The backing band he put together to tour it would later become Loaded, an on-off gem of a punky, hard rock band, with whom Duff would record three albums. It wasn’t until he formed Velvet Revolver that he crashed back into the big time.

Featuring the bassist’s former GN'R bandmates Slash and Matt Sorum, as well as Dave Kushner from hardcore luminaries Wasted Youth and Stone Temple Pilots’ Scott Weiland on vocals, this was a supergroup the public could get behind. Even when a new version of Guns N’Roses started doing the rounds, Velvet Revolver provided a far better alternative than Axl And Assorted Hired Hands.

Axl and Duff didn’t seem to share the animosity that existed between the singer and Slash, and the bassist appeared onstage with them in 2010 at the O2 Arena in London. He also filled in for the absent Tommy Stinson on a South American tour in 2014, so it was not as big a surprise to see him rejoin the band, alongside Slash, for the Not In This Lifetime Tour that levelled the London Stadium last summer, and will be back at Download in just over four months’ time.

Through it all, Duff McKagan has remained the ultimate rockstar. He lived through the whirlwind of being a member of the biggest rock band in the world, with all the debauchery that entailed. When this caught up with him and he nearly died from a ruptured pancreas, he sobered up, straightened up, started a wealth management company, essentially became an accountant and is still cooler than you, me or anyone we know.

So happy birthday Duff. It’s good to see you back where you belong.