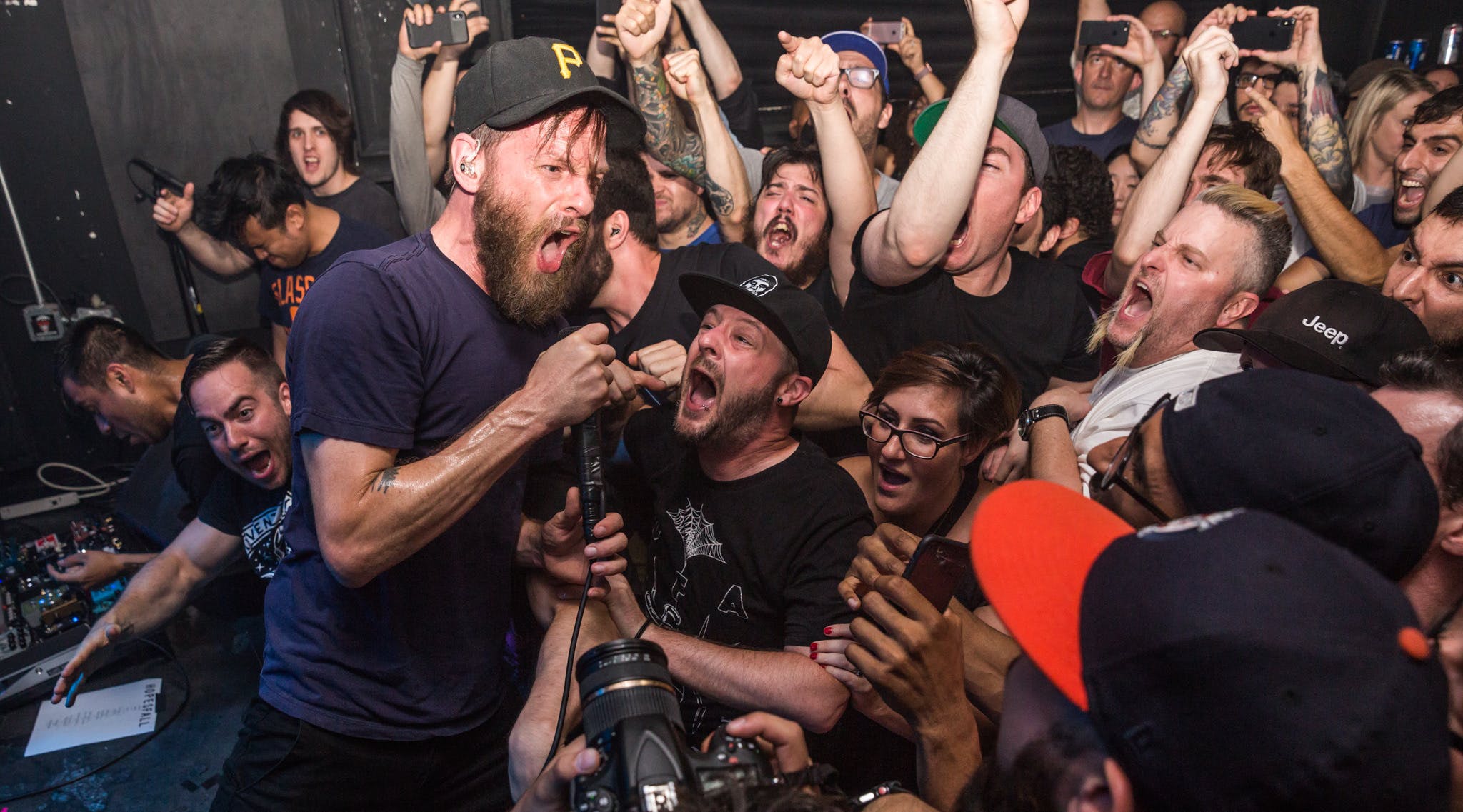 On July 14th, Kerrang! had the privilege of sponsoring the comeback concert of one of our favorite post-hardcore (post-rock? hardcore? simply kickass?) bands: Charlotte, North Carolina’s Hopesfall performed their first show in seven years; their first show featuring new material in ten years; and their most meaningful show in as long as many fans could remember.

The two nights at Saint Vitus Bar in Brooklyn, New York, were in celebration of Hopesfall’s new album, Arbiter, released to rave reviews and mass hysteria from longtime fans and newcomers to the band. And Saturday’s performance -- stacked with some of the band’s most popular tunes, both old and new -- was filmed by Kerrang! and Frank Huang and mixed by producer Will Putney (Every Time I Die, Knocked Loose, Vein), to be streamed in its entirety from our Facebook page tomorrow, August 16th, at 2pm EST.

While we anxiously wait to share this killer set with the world, we thought we’d catch up with Hopesfall guitarist Josh Brigham and drummer Adam Morgan to chat about the reunion, the process of writing new material, and what’s next for the band.

Kerrang!: It’s pretty amazing how many people are coming out of the woodwork to claim Hopesfall as their favorite band. You do have a passionate following. One that, maybe, you didn’t know you had?

So, the last time you had played together in any form was over a decade ago. How did the reconciliation finally come about?

JB: Time heals all things. You live on top of people for so long, and we just needed space…. After that, we talked, and we were like, ‘We’re friends, we should be hanging out.’ Adam and I went up to see Shiner in Chicago, and we stayed with Jay, and we were like, ‘Check out these demos. You should sing on ‘em.’ We were like, it’s a new project! And then the labels got involved, and it ultimately changed back to Hopesfall…. But we just needed time. When people ask, ‘Why did you break up when you were just hitting a creative [high point]?’ It was too much of not enough. It didn’t feel sustainable.

In an interview with AP, Jay said that when the band broke up, ‘We kind of fizzled out, and I think that left a chip on our shoulder. I don’t think there’s necessarily a bar set to try and exceed. We have more of an open playing field.’ Do you think the album is so good because there was no pressure?

JB: I feel like the process was the same as every single time we’ve ever written: We get in a room with everybody, everybody has ideas, and we just hammer it out…. But that’s what we’ve always done. It definitely didn’t feel like there was any pressure.

Adam Morgan: There was no pressure.

JB: We were just trying to have a creative outlet and put ideas together, because it’s fun.

AM: We didn’t have a plan. We were just doing it to hang out, drink beer, and scratch that itch. It came together so organically, with no motives other than to do something for ourselves.

JB: The reason you started being in a band to begin with was to play music. Like, the very first time, you just get in a room, and you capture that energy, you get hooked on that. We were doing that as teenagers, and we still feel that way. That’s still exciting, when you all look at each other and you stumble across that piece of music, and you’re just like ‘Oh yeah, that’s it.’ We’re chasing that feeling.

Musically, Arbiter actually has a more hopeful vibe than Magnetic North, which seemed much darker. Were you conscious of that while writing it?

JB: The only intent was to get the right energy where everybody’s feeling it. I can’t say we had a specific goal in mind, we were just like, let’s get in a room, and see what happens. It was more like, ‘Dude, that riff was pretty sweet. Let’s go.’ (Laughs)

The one thing I’ve always wondered as a fan, though -- because the lineup has shifted again and again over the years – is how much each person brings to the table creatively. Is every album different in terms of who’s putting what in?

AM: Well, yeah, everybody has their own style. [But] Josh has been there through the whole thing.

AM: No one comes to practice with “the song.” Like, ‘this is how the first part goes..’ People come in with a five second part, and then, ‘Oh, we like that, what do we do from here?’ We have a beer, and we think about it. It’s just a puzzle: we just dump out pieces and find ways to link them up.

Matt (Talbott, Hum singer / guitarist) produced 2002’s The Satellite Years, and sang vocals on the song Escape Pods For Intangibles. I think that the Hum influence came out big time on this new album.

JB: Back in the day, there was a rule to being in Hopesfall: You’ve gotta like Hum, and you gotta have nothing else to do with your life. (laughs) But even when we recorded with Talbott, I don’t think he realized how nerdy ultra-fans we were. When we showed up to the studio, we brought a case of Red Stripe. And he was like ‘What, did you guys see me drinking Red Stripe on stage one time?’ And we were like… ‘Yeah.’ (laughs)

AM: He was definitely weirded out for a couple of days.

JB: And then he was like, ‘Okay, you kids are cool.’ At the end of recording that, he was like, ‘I see where our influence was on you guys…. I like you guys.’ And that was like, ‘Oh my god. Fucking Matt Talbott likes our band.’ That’s the biggest stamp of approval you could ever have from our point of view.

What were the first songs that you wrote for this album?

JB: I, Catapult, and then one that didn’t make the album, Revolt, Revolve. H.A. Wallace was the third song that we wrote.

AM: And then Drowning Potential.

I heard that “Arbiter” was going the be the name of the entire band, but then you simply used it as the album title. Jay uses it in the songs To Bloom, and Indignation. What is it about that word? Why is it used?

JB: It’s what they call judges in France, and I thought that was cool. It’s also what they call the Halo characters. Ultimately, it’s the decision maker.

My initial reading into it was that you were negotiating with each other in the production of this album. But it actually seems like this album was pretty drama-free?

JB: Dude, we fight like brothers. We’ve all been friends like, 20-plus years, but we all love each other.

Both: Yes, very much so.

Is must be awesome to finally have control over stuff like sequencing and artwork.

AM: Absolutely. Every decision that’s made – even vinyl color pressing -- is always run by us, and we have final say, which is just absurd. It’s foreign to us, but it’s super nice. Almost to the point where it’s like, ‘I don’t know, you make the decision!’

The song Saskatchewan was originally cut from Magnetic North by Trustkill without your knowledge, supposedly for length. But you’re playing it tonight. That’s also gotta feel good.

AM: It’s really not proving anything to anybody (laughs).

JB: We wanted to play it. I thought that that was like, the lynchpin of Magnetic North, and to have released it without that song was too much for me. But we wanted to give the song life, and we want people to hear it.

And has there been any talk about what’s next for the band?

AM: We all decided, ‘Let’s not even think much about it until we get these three shows done with.’ That’s the honest truth. But nothing’s ruled out, and nothing’s off-the-table. We have to take this a step at a time, and we don’t want to get ahead of ourselves. We spent a great deal of effort focusing on these three shows and didn’t want to put more pressure on ourselves. It might not be a satisfying answer, but it’s the truth. We don’t know…. But if there are more shows, I think we can say without a doubt it will never be a 30-day U.S. tour. Shows will be limited.

JB: Life intervenes. Everyone has careers and jobs; Adam has a 7-year-old-daughter. Touring eight months out of the year is not an option at this point.

I think people are just stoked to have this album, and that’s enough. Thank you for letting Kerrang! be a part of it all.

AM: Absolutely. I still have our Kerrang! Magazine feature from 2003: Evanescence was on the cover, and the picture was like, a landscape that took over two pages, and we had a little write-up.

JB: Where we’re hanging off the bridge?

AM: Yeah! They sent a photographer out at one of our shows before we had to go in and sound check and stuff. We were looking for a cool place to grab a photo, or something.

Or grab a ledge.

AM: Yeah, the photographer was like, ‘Let’s walk over to this bridge, I’ve got an idea.’ And we’re like ‘Okay!’ I figured we’ll just have to take a picture leaning over the bridge. But, ‘Just hop over, and..’

JB: And HANG THERE! We were like, holding onto it, over a road!

AM: What if we could find another bridge? And do the same photo.

JB: I’d want some belay gear to make it safer.

AM: [Terrible British accent] ‘Hey guys, why don’t ya just hop on the ledge there, hang there for a minute, and I’ll getcha picture…. FUCK!!!’

Catch the stream of Hopesfall's performance at Saint Vitus Bar in NYC on August 16th at 2pm EST on our Facebook page.

It’s sooner than you think…