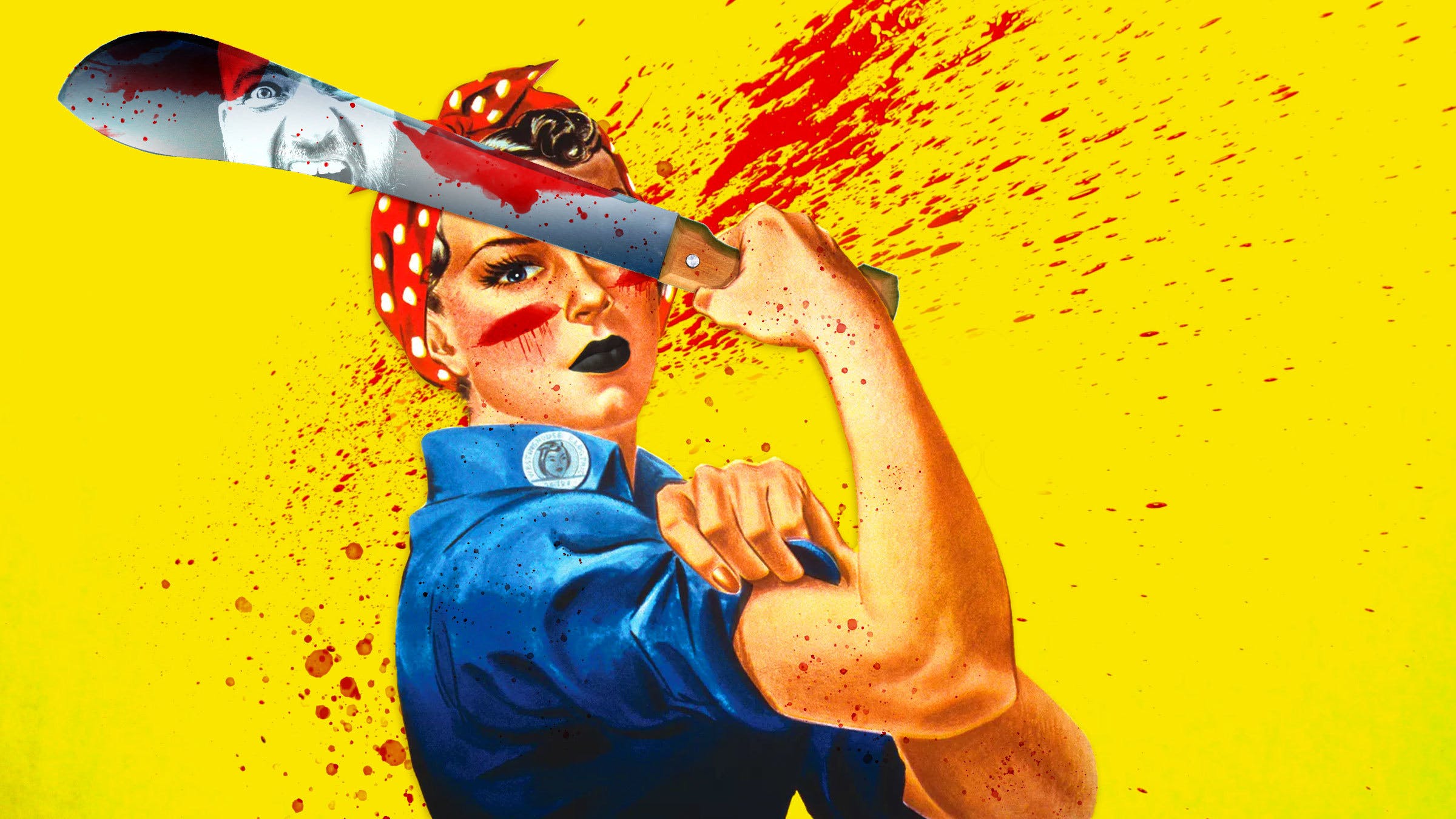 Misogyny in death metal has been done to death. For decades, death metal bands have focused on the classic horror-movie theme of cutting up girls as the sole subject matter of their shock value-driven albums. In more recent memory, brutal, technical bands like Devourment, Thy Art Is Murder and Vulvodynia have sought to outrage audiences with songs like Fuck Her Head Off, Whore to a Chainsaw and Psychosadistic Design, respectively. The latter’s seemingly-benign title is belied by its opening sound clip of a disturbing sexual assault and one of the more intelligible lyrics (again, relatively speaking) exclaiming, “Mangled fucking slut!”

However, in the modern scene, key players in the genre -- both those who've previously played into the problem and those who have been affected by it -- are turning the tide. Not only have many bands, including those listed above, changed their approach to death metal lyrics, but many of the scene's new voices have also chimed in on nuance of the violence represented in their music. And as repulsive as all death metal subject matter is, especially in brutal/slam death metal and deathcore, many of the musicians at receiving end of the scorn (read: women) think those penning the words need to be given the opportunity to grow.

“Bands who have had misogynistic lyrics in the past -- you’ve got to give them the credit of growing up and reflecting on what they used to talk and sing about,” states Larissa Stupar, vocalist for UK death metallers Venom Prison. “Most of them are fathers themselves, and they’re married, and they’ve grown up. They know that it was fucked up.”

For Devourment, the shift had to be a little more pointed. Over the years, the Texas slam pioneers' music has become synonymous with toxic machismo in death metal -- an idea the band never meant to foster. Part of changing this perception was moving away from referring to genders almost entirely on their new LP, Obscene Majesty. Even the BDSM-centric Arterial Spray Patterns avoids gender, and specifically refers to consent. The album’s one exploration of the topic, Truculent Antipathy, inverts the trope and proclaims “misandry rules misogyny” as a would-be rape victim turns the tables on her aggressor.

Ruben Rosas, currently reprising his role as Devourment's vocalist for the first time since 1999 debut LP Molesting the Decapitated, explains: “The song is really about [the fact that] women are just as fucking insane as men are, given certain circumstances. If you read the lyrics, you’ll see in the end that the woman in the story was molested and abused as a child, and became this fucking psycho.”

Devourment have been a band since 1995 and, as such, have watch death metal change over multiple decades. The members who spoke to Kerrang! -- drummer Brad Fincher and guitarist Chris Andrews in addition to Ruben -- collectively expressed regret over past lyrics, even though they didn’t necessarily come up with most of them (that honor goes to former bassist-turned-vocalist Mike Majewski).

Given his unique position as a growing musician who was there from the beginning, Brad provides some insight into the one-upmanship that pushed brutal death metal to really embrace its prefix: “It just became an arms race because we were all trying to out-extreme each other, and I think that’s where a lot of that was born out of. It’s like, ‘Oh, these guys are gross. Let’s get even sicker and more offensive and cartoonier with it.’”

One mirror turned on Devourment that made them reconsider their identity as a band was a VICE article that listed them amongst some of death metal’s violent misogynistic bands. Chris Andrews admits his first reaction was outrage, but once those emotions subsided, he became more reflective on what led the band to be included on such a blacklist.

“It did kind of hold up a magnifying glass to that," says Chris. "The fact of the matter is we don’t really believe in these ideas or fetishize them or anything...If you’re getting called out for it, you’re obviously not writing a shocking horror movie here, you’re just pushing this misogyny button over and over again. Why are you doing that?”

For Vulvodynia, the switch was more from fantasy to reality -- or at least from someone else’s fantastical reality to their own. Vocalist Duncan Bentley admits their last album’s sexually violent focus was born of people accusing them of not being true slam, causing the band to double down and write each song through the eyes of a different serial killer. But their newest release, Mob Justice, focuses on life in their home continent of Africa, with album-closer Cultural Misogyny examining the barbaric practice of female genital mutilation, while also confronting the misogyny learned through society.

Duncan reveals another reason for the change: “We saw people screaming the lyrics back in our faces, and we just felt like we needed to go back to something that meant more to people, and meant more to us, as well as hits home better for us. So we just felt that, what’s more brutal than a lot of the things going on back home?”

Fantasy has often provided an escape for death metal, but that has in turn become a loophole for leaning heavily on misogynistic views. The love of old-school horror movie themes is often used to excuse violent lyrics, but as society acknowledges more and more the truth about sexual assault and misogyny -- and as plenty of classic horror films age poorly on the rewatch -- many musicians acknowledge that such reasoning is a cop-out.

READ THIS: How different genres of rock deal with sex and sexuality

“There’s been enough death metal albums to just have that story, horror-type vibe,” says Duncan. “We’re a new generation now, where we should kind of abolish that type of thinking and that type of writing because it’s still spreading a negative point of view.”

Part of this change involves the equal opportunity approach to violent fantasy. Abnormality vocalist Mallika Sundaramurthy has growled blunt and incisive lyrics like “Crush and cut the balls” in her all-female side project Castrator (the track in question is aptly titled The Emasculator), but she's also quick to note, “I think it’s not a black and white issue, is my point; it’s grey.” Venom Prison also have a rape-revenge narrative in their song Perpetrator Emasculation, but are similarly looking to the future. This consensus is even more powerful considering both women have experienced some form of sexual harassment or assault.

Australian deathcore act Thy Art is Murder addressed misconceptions about sexual violence on Atonement from latest LP Human Target. The track was the most direct the band has ever been on the topic since they stopped utilized women’s suffering as lyrical fodder with 2012’s politically-charged Hate. Guitarist/lyricist Andy Marsh was the catalyst for this change.

“One of the first moves that I made when I joined the band was to stylistically redirect things,” Andy explains. “I thought, what’s the point in having such unrelatable lyrics? I get this shock and gore culture and free speech and Cannibal Corpse and all those sorts of things, but for me as a lyricist and as a fan of music, I like things to be a lot more relatable. I’ve always struggled to relate to fantasy and gore; maybe that’s why I don’t really get into horror films all that much.”

That immature mindset could explain why it experiences a second wave with the advent of deathcore, a genre that mashed death metal and metalcore and shared brutal death’s obsession with unspeakable violence, often against women.

“I’m not sure if this was just a timestamp for 11 or 12 years ago with the rise of deathcore and young teens trying to write aggressive music," says Andy. "Those sorts of things were what were popular or easy to make impactful because it was so shocking.”

More than just a negative point of view, the words can actually ward off people who otherwise might be death metal fans. German-born Larissa first discovered death metal before she understood the lyrics, as her first language wasn’t English. Her relationship with the music changed alongside her improved understanding of what was being said.

“I was interested in what bands were singing about, I just didn’t really know when I was younger,” she says. “When I did notice, it was really upsetting.”

Larissa actually stepped away from death metal for a while and got her start fronting bands in the hardcore. That scene allowed her to express herself in ways she might not have been able to in death metal.

Mallika from Abnormality specifically didn’t breach feminism lyrically when she formed Abnormality back in 2005 for a couple key reasons. “It’s very hard to be taken as anything other than a sex object, and it’s still a struggle just with the very basic, simple respect of being treated like a musician. To tackle those deeper issues, I think I would just be faced with a lot of opposition, but actually with Castrator we’ve gotten so much support. It’s really surprised me. The world has changed a lot in those decades, in a good way...To be in the death metal scene in itself was a rebellion, much less trying to change people’s opinions about things.”

“Unfortunately, we women have to deal with a lot of this in real life,” adds Mallika. “Some quote I heard was like, ‘Punch up, don’t punch down.’ Why would you make it harder for vulnerable people? Why not criticize privileged people?” Mallika goes on to suggest a fine target: politicians who both foment misogyny and show apathy for everyday people as a whole.

READ THIS: How Myrkur and Zeal & Ardor are changing the face of black metal

That sentiment is one that death metal has come to embrace: the real monsters of the world want all of us to fail, regardless of gender. This has fostered a sense of solidarity one might not have seen in the genre previously. After constant messages questioning their name choice, Vulvodynia made shirts and donated portions of their profits to the National Vulvodynia Association, a non-profit that helps improve the lives of women suffering from the band’s namesake.

Hopefully, through all of this, the future of brutal death metal and deathcore can be a more welcoming place for women. On the topic, Devourment's Chris Andrews is as brutal in his honesty as he is in his music.

“If you’re writing a song in 2019 about how you hate women, it no longer seems like a representation of something," he says. "It just seems like that’s your fetish.”

Thy Art Is Murder release video for Human Target, the title track from their upcoming album