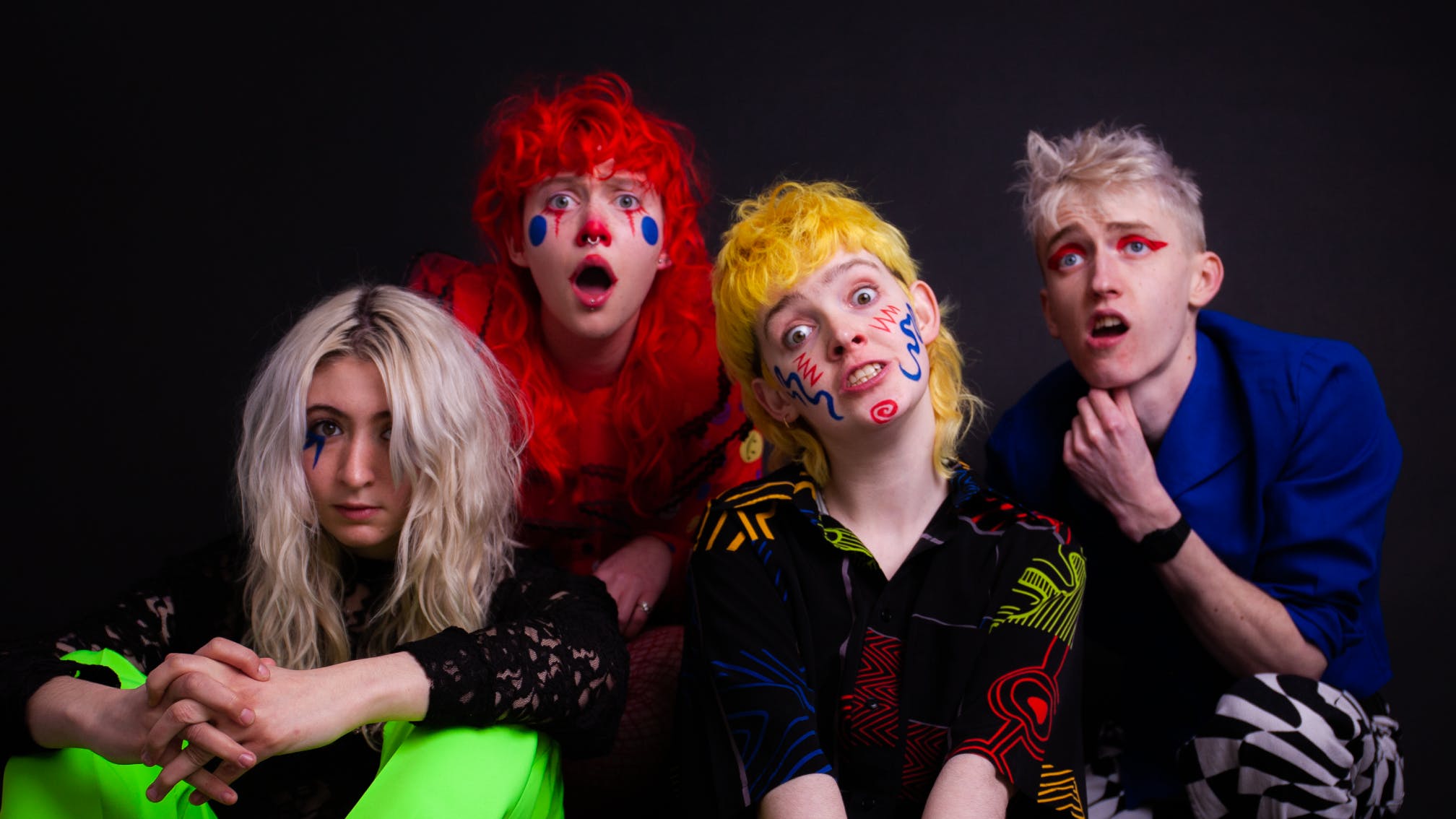 We’re in the internet era where everything is being slapped with the aesthetic-core label. From goth cottagecore vibes to scenecore, there’s a funky internet trend title for everything. But queercore is an OG – it’s been putting in the work for decades. For those of you who might not be too familiar with this revolutionary subgenre of the punk ethos, queercore is riotously anti-authoritarian and radical. A wide-spanning movement birthed in the ’80s across London, the U.S. and Canada, the queercore scene fought against the mainstream heteronormative LGBTQ+ society and discrimination across the community.

But it didn’t stop there. It intersected with the riot grrrl scene as DIY zines and pamphlets became a progressive means to spread information across underground networks. And, most notably, the homocore movement gave way to game-changing bands battling the “macho punks” image and queerphobia in the scene, with the likes of Pansy Division, Tribe 8 and B-52’s being some of the most common names thrown around at the time. The roots of the homocore scene have been set for generations, and thankfully so. Without years of relentless activism, the queer punk world wouldn’t be the progressive, inclusive community we have now.

And today, the image of queerness and homocore is a lot more representative of the society we live in. A quick look online and LGBTQ+ adjacent terms on TikTok have been flooding with searches racking up millions – yes, millions – of views. The term “queercore” has over seven million views, while “queercorepunk” has amassed close to 40,000 interactions.

Kerrang! caught up with popular TikToker and drag artist Salem VVitch, 23, who celebrates alt. aestheticism and queercore culture online. Hailing from Texas, they define the homocore scene as “riot” and “a ‘fuck you’ to people who looked down on us as a queer community and as punks”. As we chat about the revived queercore community within the younger generation, they share their thoughts on the current state of things. “I don’t think the queercore scene is dead,” Salem considers. “I like to believe that it’s underground – like how it was in the beginning. Looking at the music genre, it has definitely been growing. One of my favourite bands [are] Dog Park Dissidents, and I was surprised about how few people know them in the real world as opposed to the online space.”

Hannah McElhinney, 31, and Rudy Jean Rigg, 24, are the genius team behind The Rainbow History Class. Their TikTok account has over 440,000 followers, and many videos debunking queer misinformation while making LGBTQ+ history bite-size and accessible. As TikTok becomes a leading news source for younger generations, writer and researcher Hannah fills us in on why queercore has become a huge movement across the internet: “A massive phenomenon among Gen Z LGBTQ+ people on TikTok has been [the use of] music as subtle ways to flag their identity,” Hannah explains. “While not [exclusively] queercore, lo-fi indie-punk artists like Girl In Red and Mother Mother are used as symbols for lesbian and trans identities respectively, while the song Sweater Weather is used to signify bisexuality. So there’s definitely a fandom around this music among the community.”

For presenter Rudy, the affinity between queercore and younger generations feeds back into its radical, hyper-political roots. “[Queercore] evolves with the community. At its core – pardon the pun – queercore is all about radical inclusivity. That, in particular, is something we’re seeing continue to be part of its centre ethos, and we’re seeing this with the punk scenes pushing queer, trans, disabled and POC punks to the centre.” At its heart, Hannah believes the renewed interest in queer history and queercore ties back to the systemic erasure of LGBTQ+ lives: “The whole point of learning history is to understand where we came from, but to this point, we haven’t been telling the history relevant to a lot of queer and trans people. Queercore is queer history and we need to talk about it.”

London-based queer punk frontman Tom Bombadil, from The Oozes, has made quite the storm on TikTok. Known for his eccentric videos and flashy style, the 20-year-old artist has effortlessly captured the carefree queercore ethos online. He and the band believe that queercore allows them to “delve into politics and identity” with ease. “Queer folks have always needed to feel seen and represented,” Tom shares. “[It] allows for a safe space to be expressive in a world that censors and represses our experiences.” And, as queercore content online continues to grow, the English band reflect on how the internet has helped revive the scene: “Tiktok has been massive in the resurgence of queercore, but by no means should it stay only there. There’s only so far this important new era can grow on one platform, we really hope it can transcend to the forefront of punk and alt. scenes.”

Salem also agrees that queercore has helped carve out a musical space for younger punk and alternative generations to feel safe. “Nostalgia culture has definitely made an impact for that newfound interest,” they enthuse. “But with the music, I imagine queer kids didn’t really identify with macho ideas of anarchy in classic punk, so it opens up the conversation to, ‘Can you be openly queer and punk?’ I even had that struggle when I was younger and I thought I was going crazy. Then I found the queercore genre, thanks to Limp Wrist, and it definitely was like an ‘aha!’ moment. It’s completely acceptable to be unapologetically punk and gay. Since then, I’ve always embraced my nature as a mix of the two.”

The spirit of queercore and its influence are readily being embraced by younger audiences who are eager for societal change – especially in the queer community. “Having pride is one thing, but to say ‘fuck the big corporations and fuck the cis white majority’ is another,” Salem continues. “It’s so empowering making your own queer battle vest and standing up for who you are as a person. That history, I think, resonates with the younger generation so much and I love to see it.”

As The Rainbow History Class’ Rudy emphatically concludes: “Younger people in our community are angry with good reason, so they’re turning to guitars!”