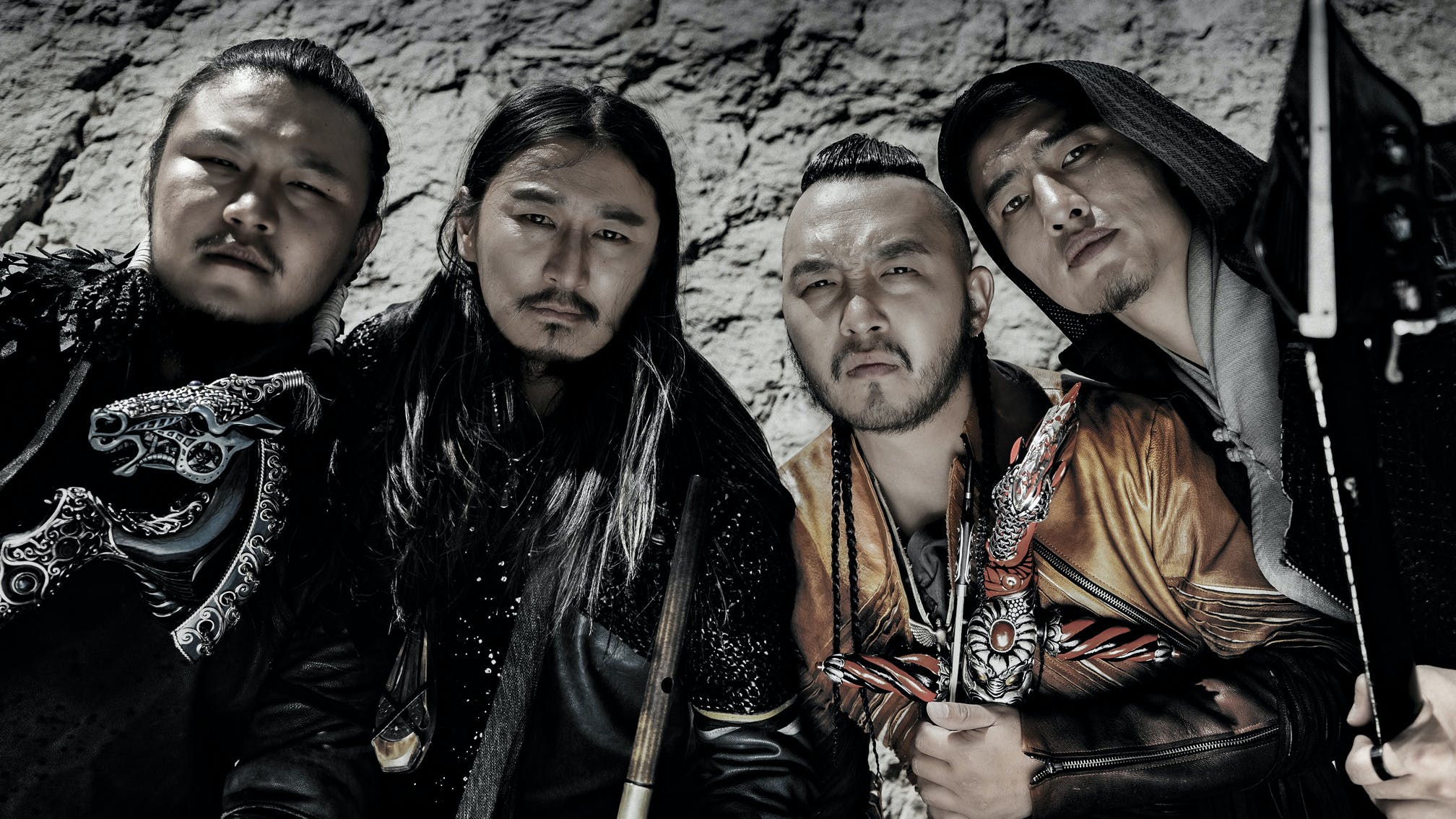 In the 13th century, the Mongol Empire exploded outwards under the leadership of Genghis Khan – or Chinggis Khaan as the Mongolian pronunciation would more properly have it. At its peak, it controlled the lives of more than a quarter of the world’s population and it remains the biggest contiguous empire in history. It would have a lasting effect on the world and, while the Mongols of Chinggis Khaan’s day retain a reputation as invaders and warriors, they also enabled advancements in science, increased global trade and facilitated the flow of knowledge and information.

The HU are the latest group to have burst from the steppes of Mongolia with plans to make an impact on the rest of the planet. Their rise might not have been as devastating as that of their homeland’s most famous son, but it has been startling in its scale and scope. They unleashed their first music video, for Yuve Yuve Yu, back at the tail-end of 2018, which has since been viewed more than 70 million times on YouTube, with follow-up Wolf Totem not far behind. They’ve also toured the world – at least until the pandemic put paid to that particular form of expansion – and dented global charts with their debut album The Gereg. They’ve become a genuine cultural phenomenon, earning the congratulations of Mongolia’s president and being awarded the country’s highest honour, the Order of Genghis Khan, in the process.

Did they ever dream that their unique brand of self-styled ‘hunnu rock’ could have taken them so far, so fast?

“All we started with was the idea of, ‘Let's share our culture and beautiful music with the world,'" says morin khuur player and throat singer Galbadrakh Tsendbaatar – aka Gala – with a smiling sense of humility. By the wonders of modern technology we’re hooked up in a three-way Zoom meeting between the UK, the Mongolian capital of Ulaanbaatar and Chicago, where Gala’s brother and the band’s manager/interpreter Tuga is located.

“If you're doing something you've always got to have ambition and somewhere you want to go,” he continues. “We had this goal and we feel like we're just starting. We're still at the start of our journey but we're very happy with where we’ve got to.”

The HU do invoke the spirit of the legendary warlord, with a track called The Great Chinggis Khaan, but they tend to focus more on the accomplishments of peace than the violence of conquest. ‘The king of the great Mongols / The king of the blue world… Cherished the wisdom of thinkers / Declared deliverance and the Gereg’ runs a translation of the Mongolian lyrics. The Gereg was a kind of diplomatic passport that enabled travel throughout the empire, a concept that resonated with the band when they came to record their first album.

“Back in the day a warrior with the Gereg could travel freely to many nations, so we wanted our Gereg album to be our diplomatic passport to the world,” Gala nods. “It meant we could tour and visit every country and share our music. It becomes our passport and that’s the symbolic meaning behind the album.”

Whether The HU’s success will open the floodgates for more Mongolian rock and metal bands to follow in their wake, only time will tell, but Gala says they are already seeing a knock-on effect.

“Ever since we released our videos and started touring the world, we can see the Mongolian artists in the younger generation are getting inspired and thinking, 'Yeah, we can make it out.' That's very important to us, showing people and being the icebreaker,” he says.

Askhan Avagchuud of Mongolian folk-metallers Nine Treasures agrees. “I think people will start to play more in this genre for sure, because [The HU] had such a massive hit,” he grins.

The HU might be the hottest new kids on the block but, at more than a decade and three albums old, Nine Treasures are elder statesmen of the Mongol metal scene. Like the majority of their contemporaries, Nine Treasures hail from Inner Mongolia. This is officially an autonomous region of China, but Askhan says he is culturally Mongolian and his band draws on the mythology, history and traditional music of the region.

The genesis of Nine Treasures is little different to that of many bands throughout the world. Askhan was first introduced to the power of overdriven rock'n'roll via a band called Hurd, who formed in Ulaanbaatar in the late ’80s and are widely considered to be Mongolia’s first hard rock or heavy metal band.

“That band was absolutely fantastic for me. I was maybe 10 years old at the time and I had no idea what I was listening to,” he recalls. “I had no idea what this fantastic guitar and bass sound was. It was very new for me and that was the first rock band I heard. After that me and my friends would share cassettes and discover more and more different bands.”

The early incarnation of Nine Treasures did not initially incorporate traditional elements, but when Askhan first started to hear European folk-metal bands like Eluveitie, Moonsorrow and Korpiklaani, a switch flicked in his brain. The band started to incorporate folk music from their own culture to complement their galloping metal anthems.

“They sound good with metal music because Mongolian instruments are always a little bit deeper than other Asian instruments,” Askhan muses. “But it’s not a natural fit. It still needs a lot of work and processing before it all comes together.”

Another influential figure in the Mongolian metal scene was Nature Ganganbaigal, the founder of fellow folk-metal pioneers Tengger Cavalry. Nature, who was also a soundtrack composer, passed away in 2019. The cause of his death was not made public but his bandmates highlighted that fact that he was “an advocate for mental health, and encouraged everyone from friends to total strangers to persist through their struggles”.

He had previously opened up to Kerrang! about his own mental health struggles and revealed that he had gone to the top of a building in New York with the intention of taking his own life. “I was on top of this building, thinking about doing it, when out of nowhere a bunch of police came,” he said, before detailing how they talked him down.

“Nature was definitely a great guy and he did a lot of things for this genre for sure,” Askhan says today. “Tengger Cavalry started a little bit before Nine Treasures, maybe two or three years earlier. When I was building up the band I started listening to their music and learned from them a lot.”

But this burgeoning scene isn’t just a tale of two bands; other prominent Mongolian acts to look out for include the likes of Ego Fall and Liberation, both of whom play more of a folk-tinged metalcore style. Askhan adds Suld to the list, adding that he produced one of their albums and that we should check them out. We did and he was right.

Where all these bands essentially play Western-style rock and metal, with added elements of Mongolian folk music and lyrical themes, however, The HU offer something entirely different.

“The main difference between the other Mongolian bands and us is that the foundation of their music is based upon western rock music, and they would bring a little Mongolian twist with the instruments,” Gala says. “Ours is different. The core is traditional old Mongolian music and we add a western twist. Our tuning is different, the way we play is wholly different; that's why I think we're unique and a little different to the other bands.”

Those traditional techniques – from the incredible throat singing to stringed instruments including the lute-like tovshuur and the morin khuur or horsehead fiddle – are not easy to master. The members of The HU are classically trained musicians, with some of them having spent 20 years honing their throat singing in particular.

“I would say this is the art of human beings connecting or communicating with nature,” Gala explains. “It started as our ancestors trying to communicate and make the sounds of waterfalls and wind. It’s an art that requires years of hard work and dedication.”

That deep connection to Mother Nature runs through many of The HU’s songs, and the Mongolian metal scene in general. The video that kicked it all off for The HU, for Yuve Yuve Yu, starts with shots of the band living perfectly modern lives in Ulaanbaatar; playing video games and staring at a smartphone screen in the coffee shop. It then cuts to the incredible vistas of the Mongolian steppes.

“These days we're living in this digital world and within four walls you can reach so many things through the internet,” Gala explains. “But beyond this there's the beauty of the world itself, and nature. We as human beings are a product of nature and when we are close to nature and when we respect and protect it, that's how we go forward. We felt like this was an important subject for Mongolia and the entire world.”

The HU’s mission of cultural exchange might have had the brakes applied by a global pandemic, but they’re poised to carry on just where they left off. Following past collaborations with the likes of Jacoby Shaddix and Lzzy Hale, the band recently recorded a Mongolian-language version of Metallica’s Sad But True and, Gala promises, their second full album is on the way.

As for the future for Mongolian metal in general, Nine Treasures’ Askhan Avagchuud is typically philosophical.

“Maybe the future will be bright, maybe dark,” he muses. “In the end it doesn't matter, as long as we’re having fun!”

The HU return with new single This Is Mongol: “I hope we are bringing positivity, empowerment and strength to fight for better days”

Watch the video for The HU’s great new single This Is Mongol, as the band prepare to release their second album later this year…