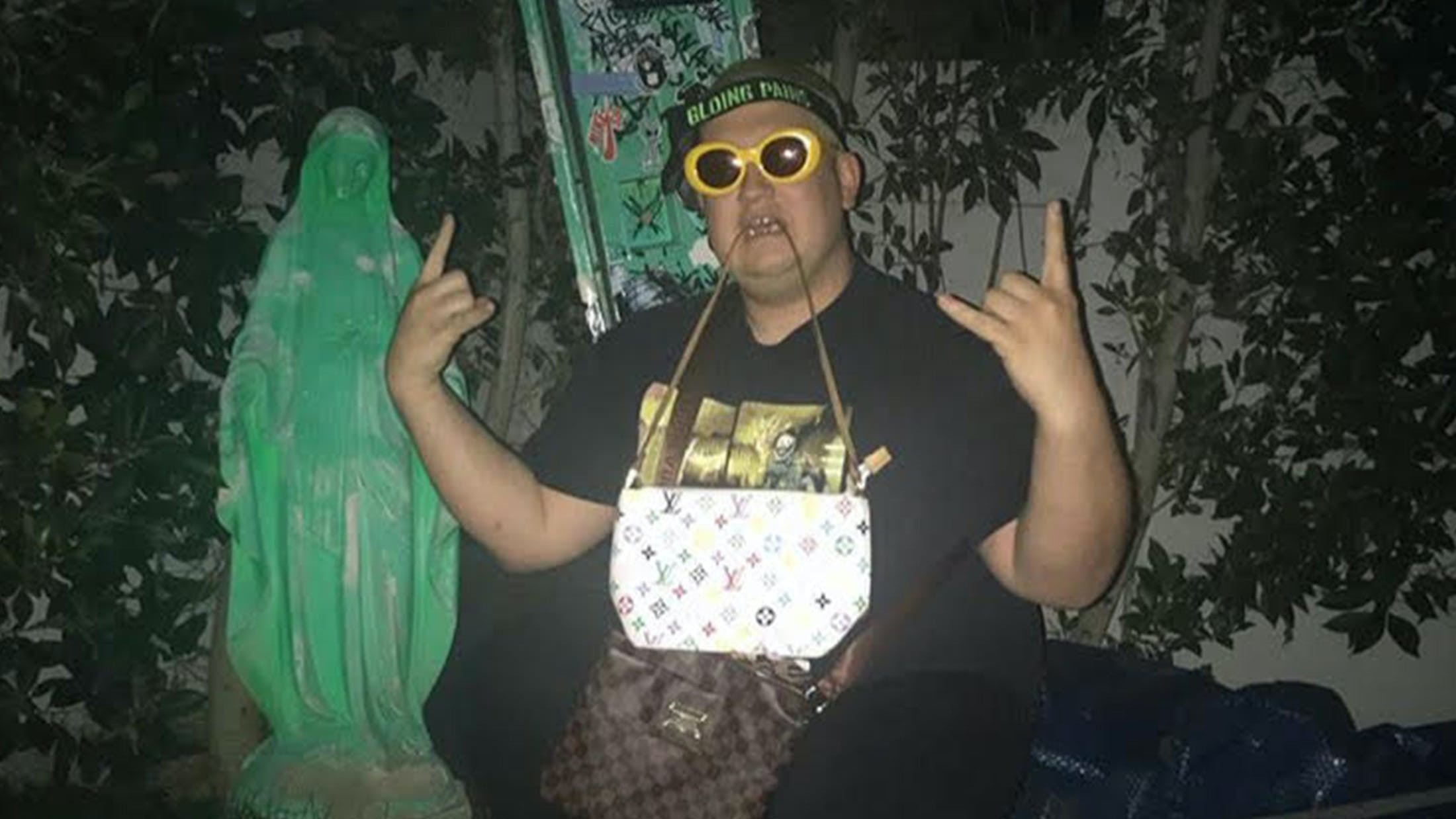 As Kornfan420 on Instagram and Twitter, Clyde Webb has made himself a totem for those weird things you think or do that you're pretty sure no one else thinks or does.

Memes and tweets about buttchugging Mountain Dew, repeatedly playing Warped Tour 2003 YouTube videos, thinking about having people piss in your mouth, smoking weed with your cousins and all kinds of other fun stuff are what he deals in. The trashy cultural references, unusual sexual peccadilloes and Minions obsession seem like the result of an adolescence spent alone with an internet connection. We're probably looking into this a bit too deeply, but Clyde's stuff feels like a comment on growing up as a lonely weird kid in a small town.

Some of it sounds real, some of it sounds made up, some of it is moving and all of it is funny. This stuff is hard to get your head around unless you've been immersed in Clyde's world for a while, so here's a gallery of some of his tweets and 'grams to give you a flavour of what he's about:

Recently, Clyde's been slowing down on the memes (although not the tweets) and concentrating his energies on Hot Leather, a synthpunk solo project that sounds like an angstier Atom & His Package and covers similar subject matter to his memes. It's a confusing but affirming mix of sarcasm, sincerity, reality, fiction and pop punk yearning that you'll probably understand if you like Lil Peep or Dude Ranch-era blink-182.

Just recently he released an album called Do You Remember Your Friends, along with a ton of homemade videos to go with it, and we think you're going to be into it.

Check out the album here (Acid is our favourite song, just FYI):

We reached out to Clyde to talk to him about memes, music and all that good stuff.

Hi Clyde! How are you?
I’m pretty good today. I got sucked into a hole of watching videos of Warped Tour 2002/2003 and I’m not really complaining. I don’t know why but I really like the way live videos sound, even if it’s recorded on a cell phone or a really bad digital camera.

Where are you from?
I’m from a small town outside of Boise, Idaho. I don’t really like it because there’s not much to do there or in Boise. I don’t really leave the house when I’m here except to get food. There’s a really solid house show scene which in Boise which is really cool. There aren’t any bands around here that I’m really into though.

How did Hot Leather come about?
When I was 16 or 17 I got into synthpunk and I really wanted to start a solo project totally ripping off The Emotron. I read that Jason [from Emotron] uses a Yamaha QY700 so I bought a Yamaha QY10 thinking that it would be pretty similar, but I couldn’t figure it out at all so I stuck it in my closet and then eventually gave it to my friend Isaac because I thought he might be able to figure it out, but he couldn’t either.

Fast forward several years and I want to start a band with Isaac where I just sing, he plays the keyboard and our friend plays the drums. We didn’t really like the way that our friend drummed so we kicked him out. Isaac and I decided to do a two piece Best Fwends/Gay Against You rip-off, but realized that we work better as solo artists, so I decided to just do Hot Leather by myself.

I asked him for the QY10 back and somewhere in all the time that had passed, someone uploaded a video on how to program it, so I was able to figure it out. I eventually bought a Yamaha QY700 which, is like the ultimate sequencer in my opinion. I wanted to use hardware instead of software because it’s really overwhelming to have thousands and thousands of usable sounds, as opposed to, like, eight that sound decent. Whenever I’d experiment with making a punk song using software I could spend hours messing around with one sound.

I’m really into Hellogoodbye and the autotuned MySpace pop sound, so I bought an autotune pedal. I also wanted to sound pretty punk, so I was going to use a telephone converted into a microphone—like Math The Band—but I stripped a bolt trying to do it, so I just bought a vocal distortion pedal. Hot Leather is like seven years of ideas that I’ve had in my head of what I want to do musically, and I’m finally in a place to make them a reality.

What are the songs about?
I don’t know if it’s just a me thing or a thing that a lot of people experience, but I’ll get a lot of phrases that come into my head that I’ll repeat endlessly until I say them out loud or write them somewhere. Some of the songs are like that, and the rest are literal things that happened like drinking Fresca after taking a cold shower on the first hot day of the year.

Why did you stop making memes?
I never really stopped, but I’ve definitely slowed down lately just mostly because a lot of my time is going to stuff with Hot Leather. Since I’ve gotten more into Twitter, a lot of my jokes are getting more text-based and not so much image-based reaction/relatable memes. I’ve always made memes or dumb internet jokes for the entire time that I’ve had a computer. I don’t think that I could ever or will ever stop making memes because joking around is the essence of my being.

What's the most meaningful meme you've ever made?
A lot of the stuff that I’ve made that’s really meaningful or personal I’ve deleted because it’s just too dark. My sister drowned while my family was on vacation a week before my 14th birthday, and I have PTSD from that. When people made a lot of “triggered” memes I made a meme of a guy driving in a car and seeing a pool and it had the triggered image that everyone was using. I went on a long rant about how using triggered shouldn’t really be a synonym for anger or anything because a lot of people are suffering from things that trigger them.

I’ve made a lot of memes about depression and suicide or sexual assault which are pretty personal and based on how I’m feeling at the time or what I’ve been through. But I’m afraid of getting too dark, so I’ll delete the ones that are really visceral.

I fully intended for my Instagram to be like a semi-autobiographical webcomic of my life and what I’m going through. The way that a lot of people take pictures of their life, I do the same by telling stories. But obviously the ones that are super sexually perverse or intended to cross a line of what is morally acceptable are total fabrications and meant to just be shocking and funny.

Hot Leather - Magic The Gathering Of The Juggalos

I’m pretty sure it got reported by someone on my friends list because I posted it as a reply to a comment and I deleted it as soon as my friend “liked” it. But, someone managed to report it anyway. It definitely violated their community standards, so I deserved it, but I also think someone was out to get me. That was the very beginning of November. I don’t know if I’ll go back to Facebook just because the community standards are so strict. I love the community that I’m a part of and all the friends that I have on there, but I’m tired of getting in trouble all the time. I’m trying to convince all my funny friends to use Twitter.

Are you excited to tour with Hot Leather?
I had to cancel the entire Hot Leather tour because my car broke down and I had to spend the entire fund that I had saved for the tour to get it fixed. But, it was kind of a blessing in disguise because it opened up my schedule so I could play Emo Nite Day in Los Angeles with a lot of artists that I’m a huge fan of. I’m setting up a lot of shows on the East Coast of the US in places like Philadelphia, New York, Boston, Baltimore, and hopefully more, but it’s not really a formal tour; it’s just me flying out and hoping for the best. I’m hoping that I can tour with someone in the spring or summer. I just got a passport, so I’m hoping to go to Europe with someone. I’ve never left the country before or anything, so it’s all just hopeful wishing and putting the energy out into the universe that something cool will happen.

Thanks for talking to us Clyde!