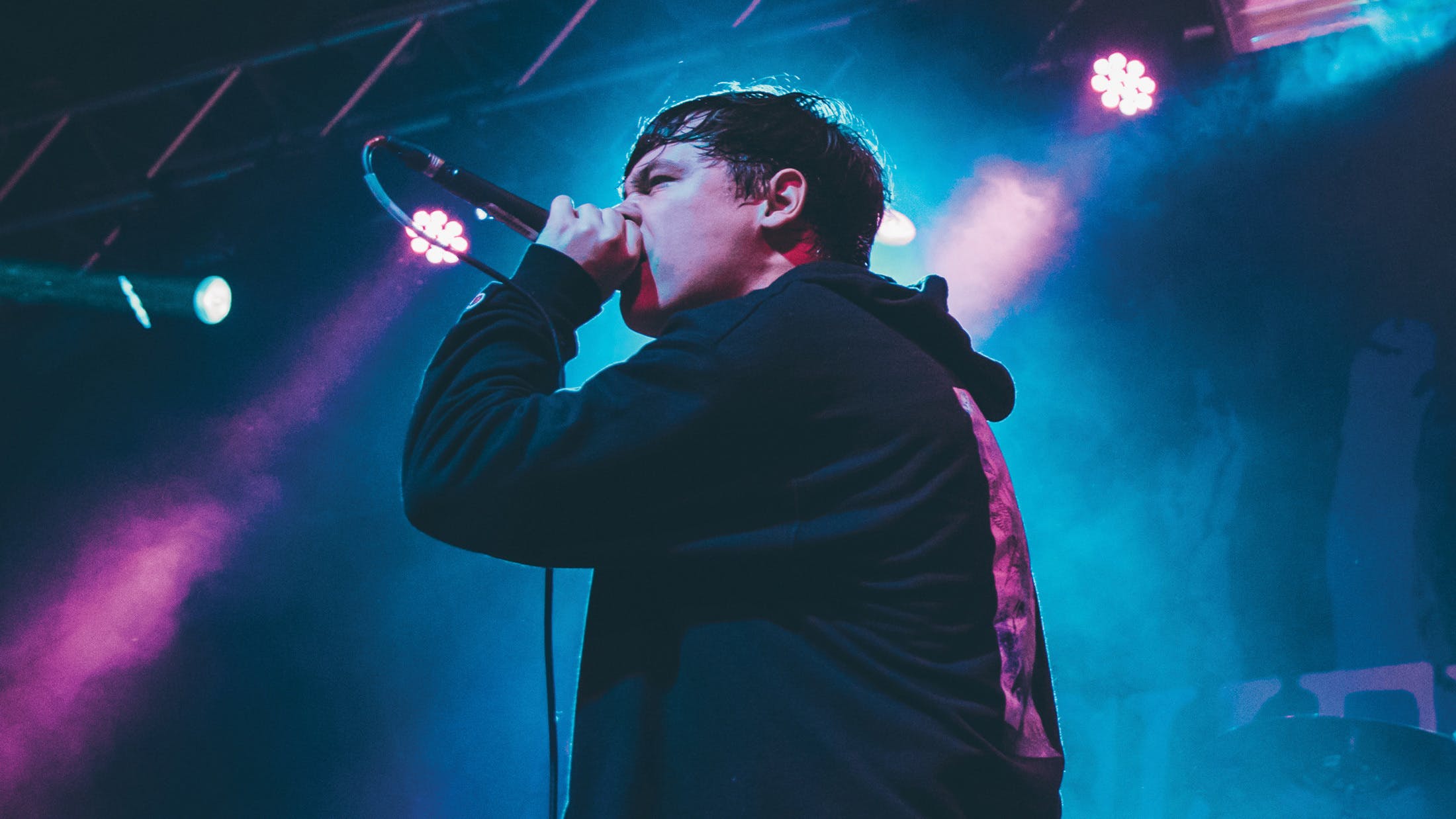 2019 was a year of chaos and catharsis for the Knocked Loose frontman. With 2020 in front of him, Bryan hopes the riot just keeps on rolling…

Sum up your 2019 in one word, Bryan.
“It could be ‘amazing’, or ‘successful’. [The band’s second album] A Different Shade Of Blue has blown our expectations out of the water in so many ways. It was such a productive year for the band.”

Have there been any tribulations to balance out the triumphs?
“There was definitely some stress. Putting out a record is always stressful, because I like to be behind so much of the creative process. From the music, to the aesthetics, to the whole way that things are going to be presented, I wanted to show growth – not just musically, but visually. A perfect example is meeting this guy Ridge [Rhine] who did the artwork for the album, then designed all the merch and the website, too. He’s my go-to guy now. It’s been such a huge weight off my shoulders to find someone to collaborate with who just gets it and is good enough to bring my vision to life. I wanted to really dive into the minutiae and make sure that no stone was left unturned. Thankfully, I was able to achieve that.”

Contrast the scenes from the start and end of 2019: from being holed-up in the studio in Belleville, NJ, to playing a sold-out UK and European tour…
“At the start of 2019, we were so focussed on creating the best album that we could. Was the studio an emotionally intense process that contrasts with being on tour? I’d say that it was beneficial for me in that it was therapeutic. The isolation allowed me to dig deep into some things I didn’t necessarily know I needed to talk about. But that was a good thing, in that it allowed me to get some things off my chest. No matter how sad or dark the context of the song is, we always enjoy making music. I was still happy and excited. Being out on the road and performing is my ultimate form of self-expression and release, though. To perform the music I’ve created and see whether it has or hasn’t connected with people is a whole new way for me to process things."

Given the universal acclaim for the record, were you surprised by any of the responses you’ve received?
“I’ve had people connect with songs on a much deeper level than they have in the past. I’ve had people tell me that my lyrics mean a lot or that they’ve helped others through a hard time before, but I dove deeper on the new record and I think that’s really resonated. There was one in particular where a girl had gotten ‘ADSOB’ [A Different Shade Of Blue] inked, and she posted it online with the lyrics to Guided By The Moon and a photo of her mother who had passed away. That’s always a huge shock. You write all these things that are so personal to you, but never really expect that people will relate to them in the way that they do. I’m always grateful for that kind of reaction. I never want to take it for granted.”

The Slam Dunk shows last summer seem like a world away. How does it feel looking back on that now?
“It was an incredible festival. It was amazing both days, but I think Leeds might’ve been that little bit crazier.”

You did a series of gigs in the same venues you played coming up around the album release. What was it like getting back to your roots?
“It was so much fun. The proper headlining shows we did for the album were in the biggest rooms we’d ever played, with this whole production package. We were turning up at the venues early and having to build the stage and the lights, soundcheck, and rehearse up until doors. The small shows before that, we were rolling up mid-afternoon, loading in and going to get food. The sound was never really all that, but we didn’t really care. We were with friends. It was a low stress environment. And the shows were crazy – these bitty-little dive bars with people crammed in. It was awesome.”

You brought out a T-shirt in support of victims of domestic abuse last October. Talk us through the motivation behind that…
“We do a fundraiser shirt every year. We’ve done a Toys For Tots one, and a Planned Parenthood one, but this was an idea that hit close to home. Our merch person is my girlfriend of about 10 years, and she’s been touring with us for the past three. In 2018 her cousin was murdered as a consequence of domestic violence. It ended up being in October, which is Domestic Violence Awareness Month. It’s easy to take a stance against domestic violence. No-one really disagrees with you, but there’s still not a lot of spotlight on it. I don’t know the exact number, but it was something around $10,000 raised for this charity in our hometown.”

Finally, what does 2020 hold for you?
“A lot. We’re certainly not slowing down. We’ve got a lot of tours coming up, many of which we can’t talk about yet! I’m so excited about it. It’ll be popping up soon!”

Knocked Loose are playing this year's 2000trees festival on July 9-11 at Upcote Farm, Cheltenham. Get your tickets here.