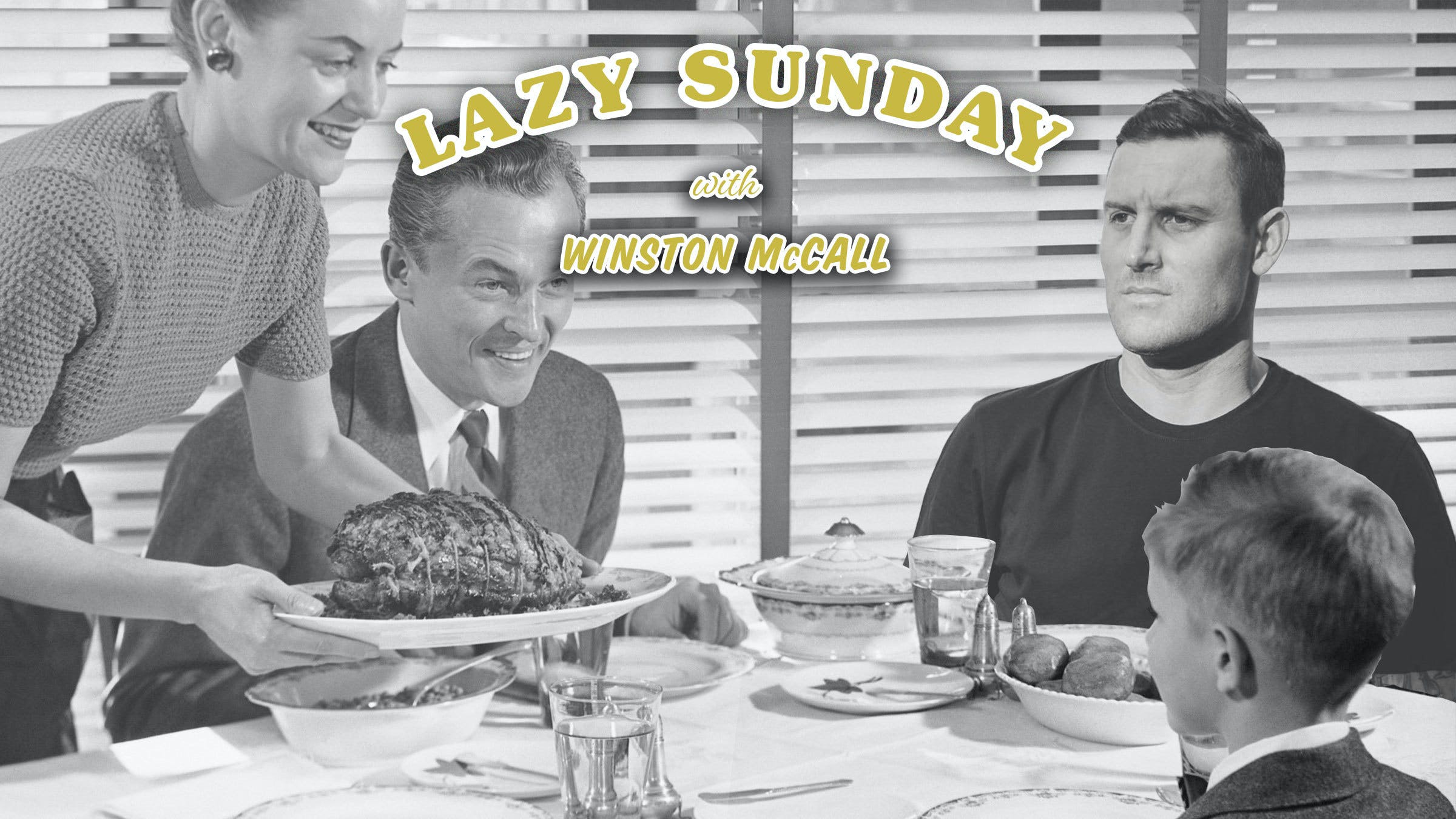 Australians are famously laid-back, and Parkway Drive frontman Winston McCall is no exception. “I’m pretty active, but I’m definitely prone to a slothing and a video game session,” he laughs when asked about the likelihood of him being found with his feet up on the day of the week designated for chillin’.

Sure, touring the world, and screaming in people’s faces every night is fun, but you can’t beat a lazy Sunday, can you? And even for Winston, a socially-conscious vegan, the chance to go all-out shlub is too delicious to pass up.

“What’s not to like!?” agrees Winston. “Even just the fact you can call it a ‘lazy Sunday’ gives you justification for being a slob and not feeling guilty. It feels like the deserved rest. When you take a break during the week, when you’ve got shit to do, you feel guilty. But on a Sunday you’re like, ‘Nah, fuck it! I’ve earned this.’”

Here’s Winston to tell us what he does when he’s doing, er, nothing…

“Well, when you’re in a band, every day on tour is ‘tour’, and then when you’re home every day is Sunday, to the point where I forget what day it is. Sundays are a ‘quality time’ type thing for me and my wife, Jess, so sometimes we’ll surf or go for a beach walk, which is really nice.

"Then usually I’ll just shut down by two in the afternoon and watch RuPaul’s Drag Race with a tub of coconut ice cream. I usually watch about six at a time. It gets to the point where I find my attention span stopping because I need to sleep, and I’ve had the fucking ice cream come down, and I’m like, ‘This deserves my attention, I’m gonna go to bed and kick off again tomorrow…’

“We’ve dropped the ball with watching movies. I haven’t watched anything but Drag Race for six months. I’m dead serious. I only found it six months ago. We watched Project Runway, because we’re in control of everything Parkway --- we design all the sets and everything, so design things interest me, and my friend was like, ‘You’ve gotta watch Drag Race, it’s like all those shows combined...' And I was like, ‘Okay, I’ve got no real interest, but let’s watch it.’ And it was fucking life-changing! Seriously! It was amazing. When we had our family Christmas, all it was was RuPaul’s Christmas Party [album] played over the stereo. That was our soundtrack, and our family were just going, ‘What the fuck is this thing that you guys have got going on?’ And I was like, ‘If there’s no drag queens I just don’t want a part of it!’ I’m fully obsessed.”

"My ideal Sunday dinner would be Spaghetti Bolognese. It’s a pretty simple one, but there’s something hearty about it. I’m just a fiend for pasta. There’s something about pasta that makes you feel like you can eat lots of it. I always make too much, and then I will always try and eat all of it. It’s that meal where I’ll eat it ’til I’m just like, ‘I feel full… but there’s still some in the pot, so I gotta keep eating it.’ That’s probably why the food starts at two in the afternoon, and then we watch things until 12 o’clock at night and it’s just a fucking food coma.”

“I used to have [a solid bolognese recipe], nothing crazy, just basing it off a good red sauce, and then adding whatever your veggie meat substitute is, but my wife’s taken over the bolognese in the last six months and hers is <out of this world>, so she’s the one making it now. I’m pretty pumped! I get anticipation when it’s bolognese night, like, ‘Oh yes, it’s coming up! It’s Jess’ bolognese, here we go!’

"She’ll kill me for saying this, but my wife’s the bad influence with the box of chocolates and the tub of ice cream! I’ll be like, ‘That’s enough,’ and she’ll be like, ‘Nah, nah, keep going.’ And I’ll go, ‘Oh, okay then.’ And then I’m like, ‘Where’d the block of chocolate go? Oh we fucked the whole thing up in one sitting? Right cool!’

“For Sunday music, we go with something cruise-y...I like a lot of chilled-out music. It could be something super-old, all the way back to Motown stuff, or it could be something really contemporary, like chill-wave, dream-pop stuff, which is really nice. Spotify’s playlists are pretty cool these days. For all the ways I’m like, ‘Damn you, Spotify!’ it finds some really cool stuff that I wouldn’t have thought to listen to on my own.”

"I don't do DIY around the house on Sunday. Every other day, though! Occasionally I’ve tried to mow the lawn and Jess has been like, ‘You can’t do that!’ It’s actually illegal to use power tools in Australia on a Sunday. You can’t make certain noises; you're not supposed to be doing it. And you can report people for a noise complaint. I don’t know if many people do...our neighbour occasionally mows the lawn, and I’m like, ‘Stop doing fucking yard work on a Sunday!’ I don’t have a go at him ’cause I’m pretty sure there’s plenty of times when they’ve been sitting down for their family meal and I’m warming up for tour and screaming my head off. I don’t have a studio in the house, so I just close as many windows as possible, and stomp around my office screaming into a microphone with no amp, with my headphones in. So they must cop the worst when that’s happening, and they’ve never said a thing about it.

“I went round when we first moved in cause it’s a small town and everyone kinda knows each other, and they were like, ‘Oh man, you’re from Parkway! Hey!’ Everyone in the neighbourhood knows the deal. My other neighbour is 80-years-old and he collects the paper clippings for us when I’m away on tour. He’ll be like, ‘You were in the paper, Winston! I’ve got the Parkway clipping for ya! Here ya go!’

Make sure you catch Parkway Drive at one of their upcoming European tour dates here.

Parkway Drive's Winston McCall: "Put us on any stage on the planet and we will make people remember it"

A revealing interview with Winston McCall: talking the power of Parkway Drive, good vs. evil, resilience and more…