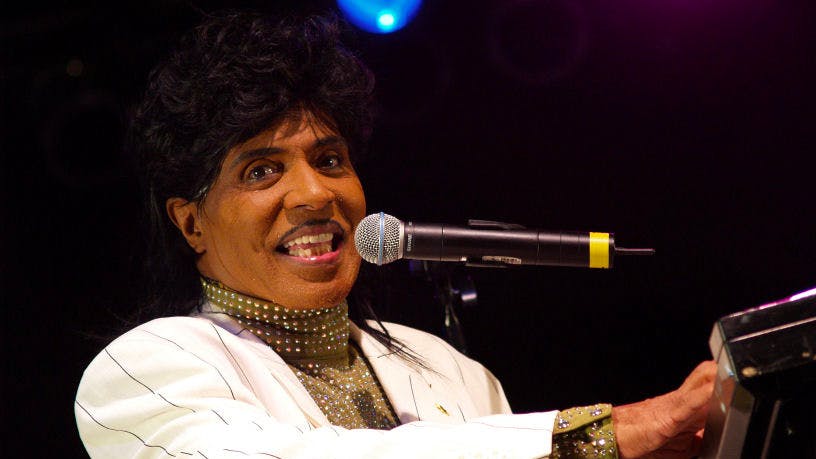 Rock’n’roll is quite literally about sex and rhythm. Which is why Little Richard sits at the very epicentre of the genre. In fact, his contribution to rock culture is almost impossible to quantify.

The sheer power of his vocal performances, his sense of style, and his outré attitude lie at the very heart of the music we all know and love.

As with most artists, much of the elements that define Little Richard can be traced back to his formative experiences.

Growing up as one of 12 children in Macon, Georgia – where he was born in 1929 – Richard Penniman’s father was a church deacon who also ran a hot sideline in hooch, and ran a night club. This collision of a Christian upbringing and illicit afterhours culture created a sense of conflict within Richard himself; he would struggle with it his entire life. In many respects, that conflict provided him with the spur for the music he made as he combined his gospel roots with a far more lascivious approach to life itself.

Richard learnt to play the piano at an early age and developed a keen interest in blues and R&B music that emanated from the southern states of America in the late ‘40s and early ‘50s. Abandoning his education to play in a travelling medicine show, he developed a singing style that was soulful, tough-sounding and all his own.

New Orleans was already a melting mot of musical influences, and the track showcased as much, it’s electrifying rhythmic drive provided by the drummer Earl Palmer who – along with Richard’s wild vocals and piano pounding – helped define a sound that would sweep across America and, ultimately, the world.

Allied to the sheer exhilarating power of the performers on that track – and on the tunes recorded by Richard in the next 18 months – was the man’s defined sense of style.

The sharpness of his greased-back pompadour hairstyle was matched by the cut of the suits he wore, all of which would make him appear larger-than-life as he sat at the piano – an instrument he played with every part of his body.

His use of pan-stick dated back to his youth, pioneering the idea of androgyny and self-characterisation in rock’n’roll – something which David Bowie would later refine on a number of occasions.

Richard’s impact on a global audience was writ large when he appeared in the 1956 film The Girl Can’t Help It – a movie that introduced audiences around the world to American rock’n’roll.

Suddenly, a generation of bored teenagers where able to witness Richard’s flamboyance for themselves. His electrifying performances provided them with an alternative to the mundane post-war reality that surrounded them. The newspaper reports of the time confirm the riots that occurred in local cinemas as a result.

Equally, his influence on his contemporaries – Elvis Presley (who described him as the greatest), James Brown and Otis Redding among them – was evident. So too was his impact on a generation of emerging musicians.

As the ‘60s dawned, however, things became increasingly hard for the first generation of rock’n’roll performers – Richard among them. In a short period of time, they were rendered obsolete by the British Invasion of 1964, as UK-based bands The Beatles and The Stones (all Little Richard devotees, who had supported him in the UK a mere matter of months earlier) launched themselves in America.

And yet, Richard’s influenced did not wane. You can hear it on the opening drum cracks that introduce Good Times, Bad Times – the first track on Led Zeppelin’s earth-shattering, self-titled 1969 debut. Deep Purple, meanwhile, overtly referenced Richard’s 1958 classic, Good Golly Miss Molly, and Tutti Frutti on their own 1970 crash-bang-wallop hit, Speed King, while Detroit proto punks MC5 covered the track wholesale in that same year on their album Back In The USA.

But Richard’s impact didn’t stop in the ’70s. Nor has his music become a museum piece. Why? Because you can still hear his influence in every single band that tries to string three-chords and an attitude together.

So what exactly are these bands aping? Essentially, it’s the same thing that AC/DC’s Malcolm Young tried to emulate when he picked up a guitar: Richard’s timeless piano riffs. Singers, meanwhile, attempt to match his incredible soulful holler. And often fail, as Iggy Pop admitted in 2016.

“I always loved Little Richard and that sort of that ability to shred a vocal, and I didn’t have that physicality,” said the man that many consider to be the godfather of punk.

Richard’s impact on soul music and wider culture came to the fore in the ‘80s and ‘90s, film director Spike Lee casting him in a Nike advert alongside Michael Jordan in 1991.

In that ad, Richard fittingly assumed the role of the genie of the lamp – exploding once again, tongue-in-cheek, on to the screen.

In many respects, his inclusion in that advertisement underlines his ability to join cultures and generations. Certainly, the tributes that have followed in the wake of his passing at the age of 87, by everyone from Jimmy Page through to Chance The Rapper seem to confirm as much.

His lasting legacy, however, is possibly best summed up by Foo Fighters leader Dave Grohl…

“I was once asked, “If u could meet one person, who would it be?” I always said Little Richard. Because, to me, he was rock & roll’s most joyous, rebellious innovator,” he wrote on Twitter, “Thank u for planting that seed, Richard. The world is a much happier place thanks to ur music.”