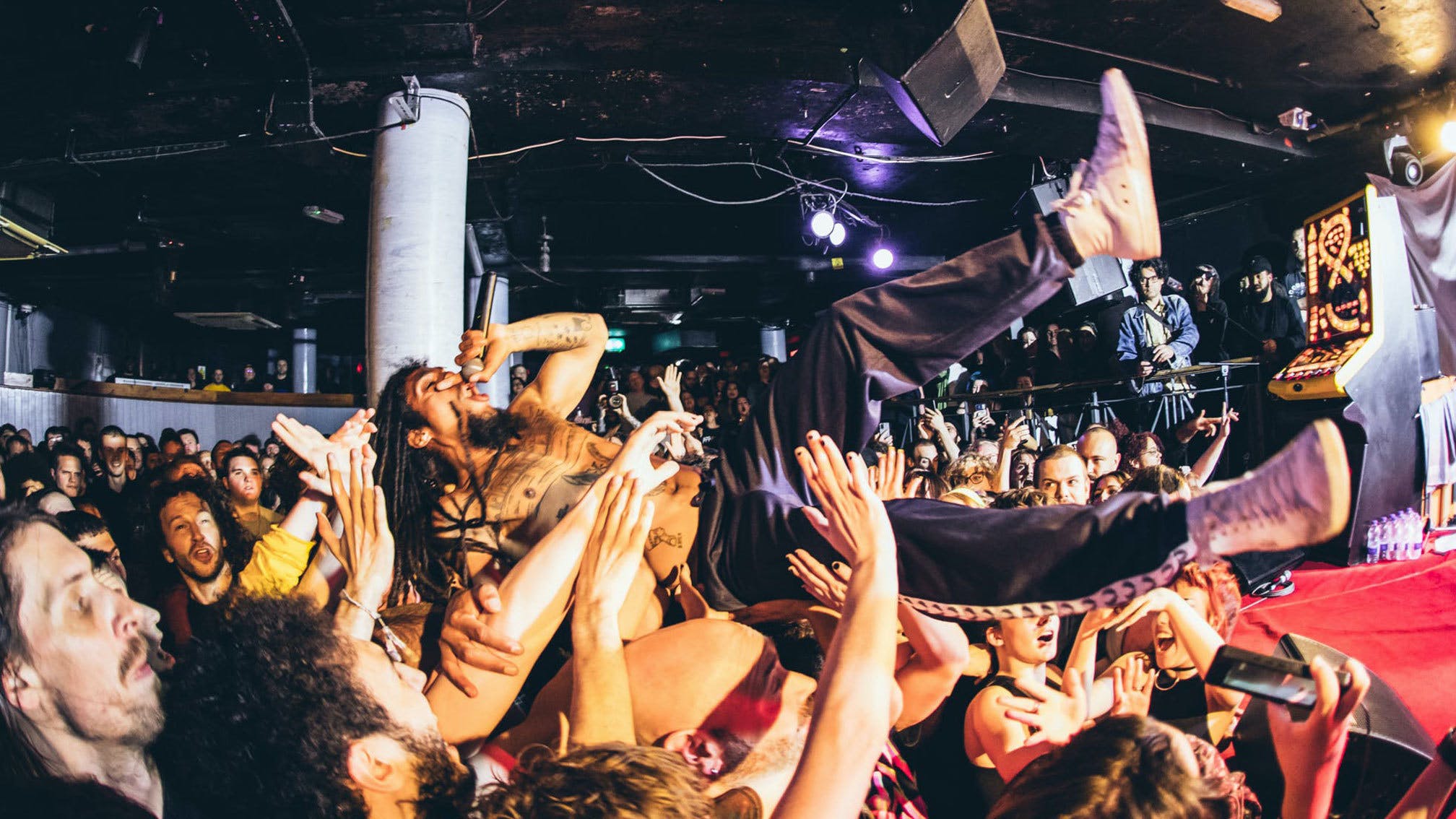 Only the most important bands make history. As their frontman Bobby Vylan triumphantly reveals tonight, Bob Vylan can count themselves as one of them. They are, after all, the first artist to ever record, mix, and produce an album all by themselves, release it on their own label, and have it reach the UK Top 20. And although it’s highly unlikely anyone’s keeping a record, they’re probably making history by being the first band to start off a sold-out Underworld show with “a bit of light exercise and meditation”.

It's certainly a novel way to hype a crowd up, with Bobbie Vylan pounding on a drum kit almost bigger than him while his bandmate does a spot of what resembles yoga. Given this band have a song in their arsenal about how eating healthily is a weapon for the revolution, it’s rather on brand.

But it’s relevant in another sense too. This band do not subscribe to cliches, whether in their music, or in their live performance. There’s no lighters-in-the-air or jump-the-fuck-up moments here – instead, Bobby’s challenging the crowd to go the length of caustic anti-surveillance ripper Phone Tap (Alexa) without holding up a phone (they succeed), and inviting them to pile onstage during the snotty Wicked And Bad. In the end, so many gig-goers come up that the statuesque Bobby can no longer be seen.

There’s a reciprocal bond being built between the band and the 500 people watching them here. Bobby speaks like he’s bantering with mates in the pub, ribbing an audience member up front for wearing an Arsenal shirt (who is met with boos from the crowd) and joking about the items that somehow end up onstage – “Who comes to the Underworld wearing a fucking North Face?” he asks incredulously when he encounters said coat. The crowd reward his wit with explosive energy, singing along to We Live Here at a volume that would make an average football crowd sound like mice while many plucky punters get crowdsurfing later on during England’s Ending. Bob Vylan must be praised for how they look after their audience, too – “We’ve got to look after you lot,” Bobby says as he throws water bottles into the pit for them to pass around and stay hydrated.

The other novel thing about a Bob Vylan show is that there is only one live instrument. All other sounds besides Bobby’s voice come from a backing track, so he can move more freely (and dive into the crowd) than he could if he were saddled with a guitar.

Opener Big Man still packs plenty of the grit of more traditional live sounds, and He Sold Guns is no less emotional for it either. It comes to life onstage in a different way, with Bobby recalling a friend “stabbed dead in his flat hallway” with a viciousness the studio version doesn’t capture, the chorus screamed with a rage that’s particularly poignant given the atrocity of the Texas school shooting that happened barely 72 hours ago.

Yet whether they’re being lightly funny or deadly serious, watching them is nothing short of exhilarating. Tonight only further proves why Bob Vylan are one of the most vital bands to have come out of this grim little island in years.