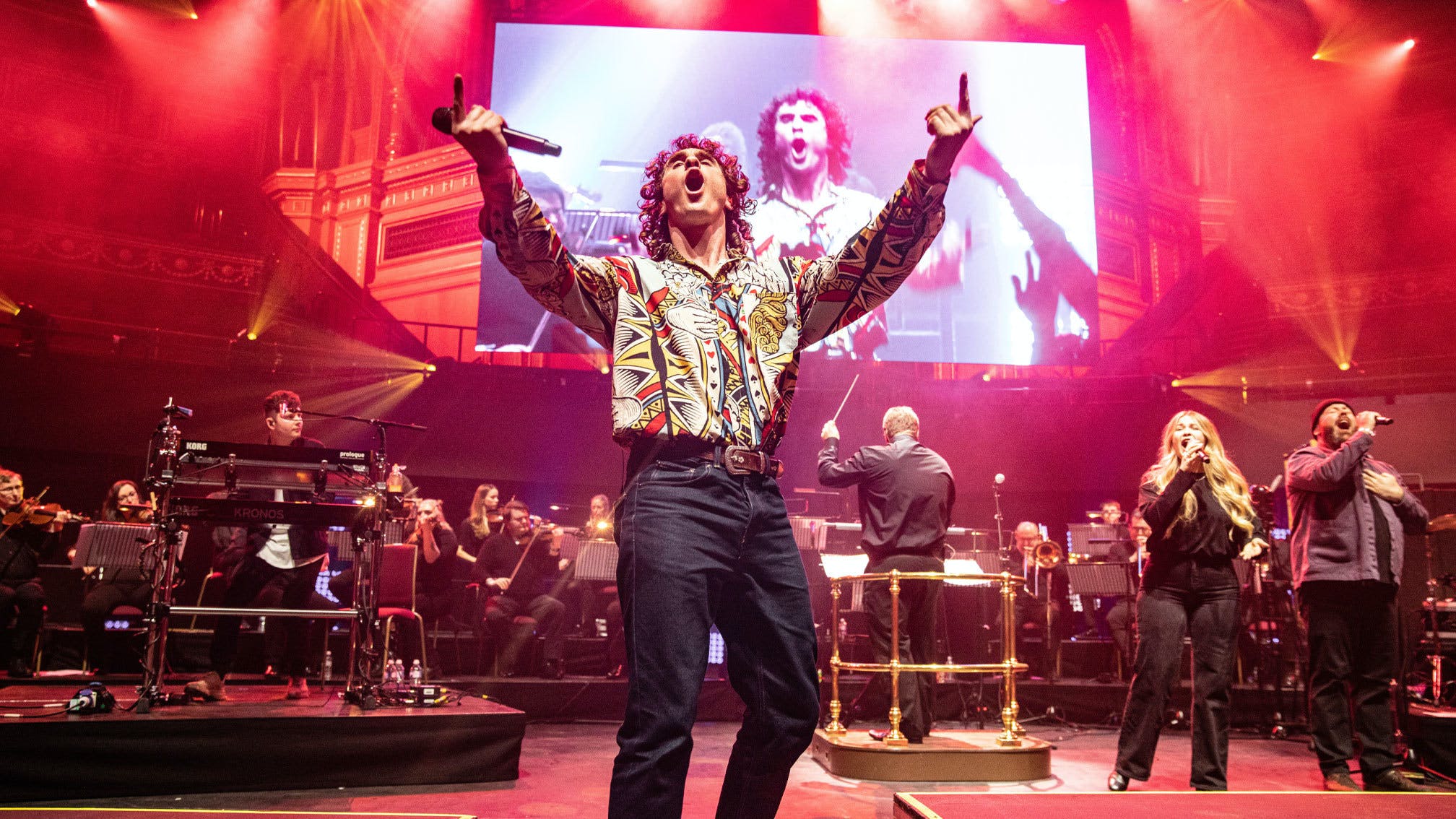 “I want to thank Teenage Cancer Trust for helping to make this happen,” beams Rob Damiani, waving to his proud mum up in one of the boxes of the Royal Albert Hall, the legendary space Rob describes as, “The most incredible venue in the fucking world.”

The Teenage Cancer Trust does remarkable work, providing specialist wards, nurses and support works to provide tailored support for young people with cancer and their families, from diagnosis to treatment and beyond. But in asking Don Broco to kickstart this week of gigs also featuring YUNGBLUD, Liam Gallagher, Ed Sheeran and rock legends The Who, the charity has also done something special for the Bedford lads: allowing them to take their flirtation with an epic new direction to the next level. It’s a gamble that pays off beautifully.

Last year, Don Broco recorded a version of their track One True Prince with an orchestra at Abbey Road for Amazon Music, an experience Rob suggests from the stage tonight as being over far too quickly. He and his bandmates certainly savour getting to repeat the experience across these 12 songs, backed by the Charity Symphony Orchestra, in front of some 5,500 people – and in successfully blending rock and classical they become members of an exclusive club featuring the likes of Metallica, Bring Me The Horizon and Alter Bridge.

Opening proceedings, Deaf Havana have been fans of the Broco since they came to play their hometown of King’s Lynn, years back, “to about three drunk people,” according to James Veck-Gilodi. Much has changed since then, of course, even if the vocalist suggests this setting might still be a little too fancy for his band: “Normally we’re not allowed to play places like this.”

On the basis of this spirited performance, however, any such restrictions, real or otherwise, should be lifted. It’s been a tumultuous few years for Deaf Havana, who recently announced their return as a duo featuring James and guitarist brother Matthew, following the departure of bassist Lee Wilson and drummer Tom Ogden. It’s heartening, then, to see them looking so excited to be performing, particularly when James, a picture of health, ditches the guitar and goes into galvanising frontman mode during Hell and Sinner. And there's something special about seeing peers from this particular wave of British hopefuls pulling together like this; eagle-eyed audience members may also recognise the hench bloke in Broco’s backing choir as Laurence Rene, formerly frontman of one-time K! cover stars My Passion.

The moment swelling strings give way to drummer Matt Donnelly’s Come Out To LA refrain, it’s clear that as with everything Don Broco do, they’re not going about things the obvious way. They are, we imagine, the first performers here to lyrically invoke Jean Claude Van Damme from the stage of the Albert Hall (Gumshield); or have topless fans swinging T-shirts over their heads in the same space people once sat and listened to speeches by Winston Churchill and Albert Einstein (T-Shirt Song). This is therefore something of a victory lap for a band who have always done things on their own terms. It’s interesting to note, for instance, that two of the most beautifully rendered and best received songs tonight, Further and Nerve, are from Automatic, arguably Broco’s most divisive record, confirming that even their bolder creative gambles are vindicated by time.

There are the songs you will assume will work on a bigger scale – and do – like Technology, which already possesses a dynamic drive; or Easter Sunday, played live for only the third time and already carrying such weight that its punch to the chest is inevitably more forceful. But then there are the smaller, more unusual moments that also reward the listener, like the lone mariachi-style trumpet cutting through the busyness of Pretty. Meanwhile, Everybody is proof that while people love violins and tubas, sometimes all you need to get a crowd up and moving is the humble cowbell.

Special mention in all of this should go to frontman Rob, who, while not the conductor as that position is taken tonight, is the crooning ringmaster between band, orchestra and audience, all while wearing a shirt so extravagant it could drown out proceedings at any moment. And guitarist Si Delaney for ensuring riffs remain top of the list of priorities. And bassist Tom Doyle, the quiet operator central to working with the arranger to make tonight happen. And drummer Matt, for being the beating heart in all this music.

It goes without saying that love is wholeheartedly reciprocated.

For more info and to donate to Teenage Cancer Trust, visit teenagecancertrust.org